Leaders of southern EU states tried to develop a common political and economic stance ahead of an EU summit. Migration was one issue on the agenda, with a call for rescue ships to give way to the Libyan coast guard. 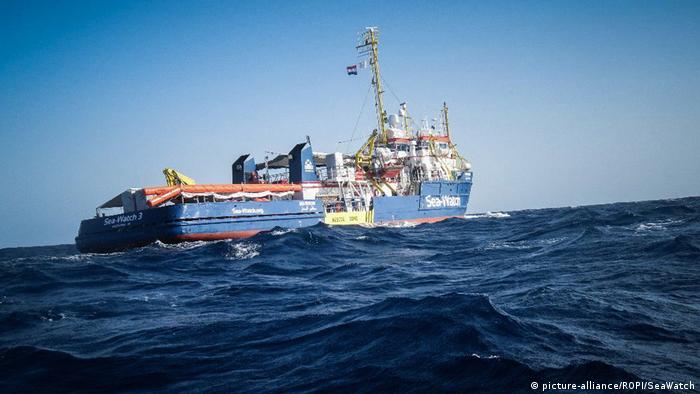 Southern European leaders called Friday for NGO migrant rescue ships in the Mediterranean Sea to follow international law and not to obstruct the Libyan coast guard.

The leaders of Cyprus, France, Greece, Italy, Malta, Portugal and Spain also said in a joint declaration at a summit in Valletta that "efforts to break the smugglers' business model need to be further enhanced, with the aim to also prevent tragic loss of life."

Italy and Malta have taken a strict line against humanitarian vessels rescuing migrants, arguing that they help human traffickers and entice migrants to make the dangerous sea journey from North Africa to Europe. NGOs maintain that their rescue vessels do not lead more people to make the dangerous journey across the Mediterranean.

The summit statement calling on all vessels operating in the Mediterranean Sea to respect "applicable international laws and not obstruct operations of the Libyan coast guard" came as the German-operated Sea Watch 3 NGO rescue vessel was off Italy's southern Lampedusa island with 53 migrants on board.

The ship has been denied entry to Italian ports after it rescued the migrants off the coast of Libya. Earlier on Friday, Sea Watch called on supporters to sign a petition calling on German cities to accept the migrants.

Leaders from seven EU states also called for greater political and economic support for Libya and the UN to handle migrants as well as an immediate cease-fire in the country wracked by civil war.

Led by Italy, the EU has supported the Libyan coast guard in preventing migrants from setting out across the Mediterranean. The policy is controversial due to the horrible condition of camps and widespread human rights abuses in Libya.

The gathering of southern European leaders in Malta sought to create a united economic and political front before next week's European Council meeting.

Climate change, migration and social policy were among the issues addressed at the summit, as well as political bargaining over top jobs in the EU including the head of the European Commission and the European Central Bank.

Abdallah Hidou, better known as Malohiya, is awaiting trial on charges of trafficking migrants to Italy from Niger. His arrest was the result of a joint African and European police investigation. (25.04.2019)

A court in Malta has fined a German captain for sailing an improperly registered rescue ship to save displaced people on the Mediterranean Sea. Malta and Italy have repeatedly closed ports to volunteer rescue ships. (14.05.2019)