A court in Malta has fined a German captain for sailing an improperly registered rescue ship to save displaced people on the Mediterranean Sea. Malta and Italy have repeatedly closed ports to volunteer rescue ships. 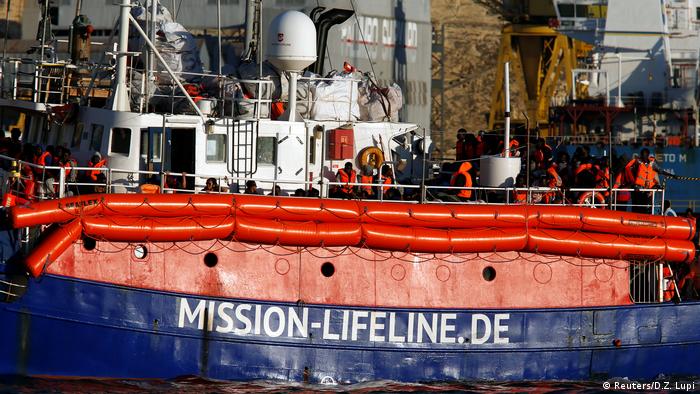 In the most recent battle in the war that some EU states are waging against rescue ships run by nongovernmental organizations in the Mediterranean Sea, Claus-Peter Reisch, the German captain of the Lifeline ship, has been issued a fine of €10,000 ($11,200). The Maltese court ruled that the ship, sailing for the Mission Lifeline aid organization, had not been properly registered to rescue displaced people. The organization announced on Twitter that it would appeal the ruling.

Last June, the Lifeline took more than 230 migrants on board from waters off the Libyan coast. The ship was forced to tack for days before it was allowed to dock in Malta, where it was confiscated by the authorities. The court in Valletta declared on Tuesday that the captain had steered an improperly registered boat into Maltese waters. 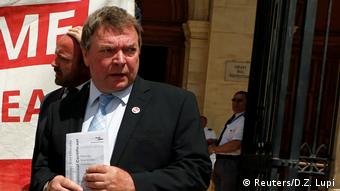 Reisch was fined €10,000 for his efforts to save displaced people from dying at sea

International volunteer sea rescuers see the investigations against the Lifeline's captain as yet another step toward criminalizing such missions across Europe.

Read more: Dozens of migrants drown off coast of Tunisia after heading to Italy

Malta has repeatedly refused to accept the displaced people brought in by rescue ships, calling instead for asylum applicants to be distributed among all EU countries. And Italy has also largely closed its ports to rescue operations since the anti-immigrant government took office a year ago. The measures have affected the work of several NGOs with ships in the Mediterranean in recent months.

Sea-Watch, a German aid organization, operates the Sea-Watch 3. Just this past weekend, the ship set off from Marseilles, headed in the direction of Libya. At times, it has been the only volunteer rescue ship willing to pick up displaced people in the Mediterranean, according to the organization.

For many months before the current mission, the crew could not set sail. The ship was moored in the Sicilian port of Catania. Italy's coast guard had inspected the vessel after a rescue mission and ordered the boat held, citing "irregularities" concerning safety and marine protection. It was, according to Sea-Watch, part of the "criminalization campaign" against NGOs.

Read more: The EU is neglecting its humanitarian duty

Italian authorities then involved the Netherlands, as the Sea-Watch 3 was sailing under the Dutch flag. The Sea-Watch 3 was apparently no longer compliant after new safety regulations for rescue ships were issued last month by the Dutch Water Management Ministry. Sea-Watch took the matter to court, where judges ruled the regulations legal but the transitional period far too short. The new conditions have been suspended until August 15, giving the Sea-Watch 3 a few months in which to operate.

Italian Interior Minister Matteo Salvini has threatened to block the ship. Should the crew rescued displaced people and bring them to Italy, "they will be stopped with all legal means," Salvini said.

Read more: Reactions to the ECJ decision on asylum law in EU

Perhaps there is another private ship sailing in international waters in the Mediterranean: the Mare Jonio, from the Italian aid organization Mediterranea. After the crew rescued 30 people last week, the ship was confiscated by Italy's coast guard, Salvini said. However, the NGO's chairman, Luca Casarini, told The Associated Press news agency that he could not confirm that.

The people rescued were brought to the Italian island of Lampedusa. The ship had previously been held in March, but was released a week later. Italy's Interior Ministry announced that it would investigate the crew for aiding and abetting unauthorized immigration.

The Iuventa, which sails for the German aid organization Jugend rettet (Youth Saves), has been accused of cooperating with human traffickers. The former fishing boat has been forced to remain in the Sicilian port of Trapani since August 2017.

Italy's public prosecutor is investigating 20 crew members for aiding and abetting unauthorized migration, but no charges have been brought. They face 15 years in prison. An appeal against the ship's confiscation has been rejected, says Christoph Stürzekarn, of Jugend Rettet.

While the crew of the Iuventa await charges in Italy, 10 rescuers were awarded the Paul Grüninger Foundation's human rights prize in Switzerland earlier in May. The crew won the prize, 50,000 Swiss francs (€ 44,200/$49,500), for rescuing more than 14,000 people in distress in the Mediterranean, according to the foundation.

Read more: In Malta, refugees, Trump and other uncomfortable topics

After an operation that lasted longer than planned, the Alan Kurdi, named after the 3-year-old Syrian boy whose drowning drew international attention to the deaths of displaced people at sea, has been put up at a shipyard for a routine inspection. At up to €400,000 the costs are considerable for the Sea Eye organization, which runs the German ship. It made headlines in April because various EU states bickered for days about which would take in the 62 people rescued by the boat at sea.

Malta's government refused the ship access to a port and only allowed passengers to disembark after Germany, France, Portugal and Luxembourg had agreed to take in asylum applicants. The seven volunteer crewmembers were denied entry by Malta. They were taken to Tunisia, and flown to Germany from there — the organization's spokesperson said that constituted harassment. The Alan Kurdi is unlikely to operate again before June.

The rescue ship Aquarius is also not operating. Its mission, run by Doctors Without Borders and SOS Mediterranee, was discontinued at the end of 2018.

Time and again, displaced people drown in the Mediterranean Sea on the journey from Libya to EU territory. It is "the deadliest sea crossing in the world," according to the UN Refugee Agency.