The EU has pulled the plug on its naval involvement in the Mediterranean anti-smuggling Operation Sophia. The move shows that the bloc has failed to establish a common policy on refugees, says DW's Bernd Riegert. 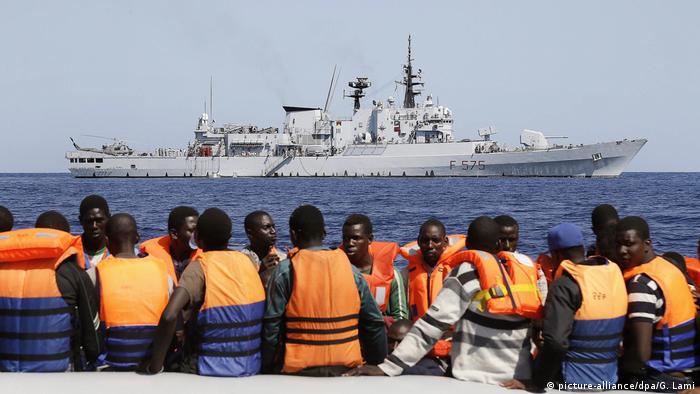 Naval ships will no longer be a part of the European Union's Operation Sophia. The mission had sought to curtail Libyan people smugglers on the Mediterranean and simultaneously build up Libya's coast guard. During its four-year duration, tens of thousands of refugees were rescued by EU vessels, with many of them being brought to Italy. Back in 2015, the Italian government said it would take in all those rescued at sea, yet later changed its position, arguing that the number of people arriving was too many to handle.

Two years ago, Italy's Social Democratic government urged refugees be redistributed throughout the EU. Most member states, not just Hungary and Poland, opposed this. Then, in the summer of 2018, Italy's new populist government barred all rescued refugees on EU vessels from disembarking at Italian ports. Italy's far-right interior minister, Matteo Salvini, had delivered on his callous agenda and was happy to portray himself as someone who stands up to Brussels.

From now on, Operation Sophia will be reduced to a largely symbolic aerial surveillance operation. The move is a disgrace, and it proves that in the EU today, national interests are afforded greater importance than human compassion.

What will happen to those people who climb into unseaworthy rubber boats, risking their lives to get from North Africa to Europe? Will even more refugees drown in the Mediterranean? We will probably never find out, with no more EU vessels on patrol and most ships run by nongovernmental organizations unable to operate. We will no longer know how many refugees are coming, and by which route.

It is a tragedy. The mission that preceded operation Sophia was in fact established following Italy's urgent request in the wake of several high-profile humanitarian catastrophes, such as when hundreds of migrants drowned off the island of Lampedusa in October 2013. Have we already forgotten these horrors? Today, apparently, all that matters is shutting the borders — no matter the humanitarian cost.

We can't know for certain, as some politicians have claimed, whether the possibility of being rescued by an EU ship actually enticed some people to climb into an unseaworthy boat in the first place and head for the European coast. This supposed "pull" factor has now been eliminated, as the number of migrants bound for the continent has sharply dropped in the last year.

The EU has vowed to continue training and equipping the Libyan coast guard, hoping it will prevent refugees from attempting to make it across the Mediterranean to Europe. Does this mean everything is taken care of? Not at all. Libya's current unstable political state means the coast guard is unable to patrol the entire length of the coast. And some people smugglers apparently work hand-in-hand with these patrols, too.

The end of Operation Sophia means the EU has failed in its attempt to establish a common refugee policy. Despite years of endless discussions, the bloc's interior ministers could never agree on how rescued refugees should be redistributed around the bloc, how the asylum system should be reformed, or which country should carry responsibility for respective asylum-seekers. And measures to boost security on the EU's external borders have been postponed until 2027. All the talk of a "repatriation agreement," of creating transit camps inside the EU, and disembarkation points in North Africa, have led to naught — although European leaders last summer lauded the plans as a pivotal step in deterring migrants.

Experts familiar with EU diplomacy say there simply is no such thing as a common migration and refugee policy for the bloc. Those words are grist to the mill of Europe's far-right populists, who are busy stoking a fear of migrants ahead of the European Parliament elections in May.

Incidentally, Operation Sophia was named after a Somali girl, who was born in the Italian city of Tarent after her pregnant mother was rescued by a German navy ship. Today, it seems, the EU no longer cares about sea rescue missions.

US: Passengers killed after train derails in Missouri 14m ago