Aid groups fear that some 170 migrants could be dead after two dinghies sank in separate incidents after leaving Libya and Morocco. Italian President Sergio Mattarella has expressed his "deep sorrow." 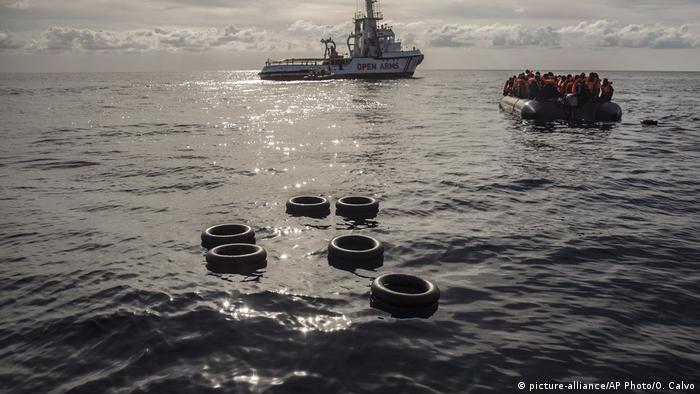 Some 170 migrants are feared to have drowned the Mediterranean Sea after two dinghies sank in separate incidents near Libya and Morocco.

Three migrants rescued by the Italian navy said 120 people had been on their dinghy when it sank on Friday, the International Organization for Migration (IOM) said. Most of the passengers were from West Africa, it added.

The dinghy left Gasr Garabulli in Libya on Thursday evening and began to sink about 10 to 11 hours later, IOM spokesman Flavio Di Giacomo said. Ten of the passengers were women and two were children, he added.

The three rescued migrants were being treated for hypothermia at a hospital on the Italian island of Lampedusa. The navy said it saw three dead bodies in the sea when it rescued the three survivors.

An Italian naval patrol plane had tried to help the migrants after spotting the sinking dinghy earlier on Friday, Rear Admiral Fabio Agostini told broadcaster RaiNews24. But the aircraft was forced to leave due to a lack of fuel, he said.

Libya sent a merchant ship to the area where the boat sank to find survivors, but it called the effort off after failing to find anybody.

German aid group Sea Watch said it had rescued 47 migrants from an inflatable boat on Saturday, but added that it did not know if the migrants belonged to the Gasr dinghy.

Fifty-three migrants who left Morocco on a dinghy were also feared dead after a survivor told Caminando Fronteras, a Spanish aid organization, that the dinghy they were on had an unspecified collision in the Alboran Sea.

The UN's refugee agency said it could not confirm either report, but added that it was "appalled" by the news.

In Italy, President Sergio Mattarella expressed his "deep sorrow for the tragedy that has taken place in the Mediterranean."

Prime Minister Giuseppe Conte said that he was "shocked" by the incident and that Italy would continue fighting human traffickers in North Africa.

But the country's anti-migrant interior minister, Matteo Salvini, said the reported deaths were "proof" that Italy's policy of barring ships carrying migrants from docking in Italian ports was working.

"If you reopen the ports, more people will die," Salvini said.

The organization said last year, some 2,297 migrants died or went missing in the Mediterranean while 116,959 people reached Europe by sea.