The European Union has relied heavily on Libya to help stem the flow of migrants into Europe. But migrants in the failed state face increasing danger, with a rebel army marching on the capital. 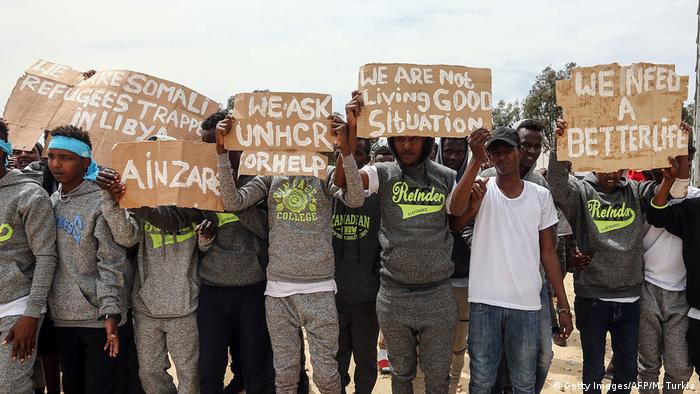 The United Nations refugee agency urged the European Union not to send migrants back to Libya, in comments published on Sunday.

The German head of the UN High Commissioner for Refugees (UNHCR), Dominik Bartsch, urged European leaders in an interview with the Welt am Sonntag newspaper to ensure the safety of migrants.

"People rescued by the Libyan coastguard in the Mediterranean should, under no circumstances, be brought back to the detention camps in Libya," Bartsch said. "Any political leverage, including from the EU, must be used to end the suffering in the camps."

He said the intensifying conflict in Libya meant that the camps were increasingly dangerous for migrants.

"The humanitarian situation of the people in the camps is devastating. There is a lack of food, water and many urgently need medical help. In addition, the detention camps in the capital Tripoli are caught in the crossfire of the armed groups."

The so-called Libyan National Army, led by Commander Khalifa Haftar, launched an offensive on April 4 to take the capital. The forces of the internationally recognized Government of National Accord are locked in battle with the group, recently securing a major supply of weaponry despite an international arms embargo on the nation.

Fighting continues on the outskirts of Tripoli and particularly in the southern suburbs. Meanwhile, the Islamic State terrorist group has intensified attacks in country. French President Emmanuel Macron announced this week he will meet with Haftar in an effort to broker a peace.

Europe has relied on the Libyan coastguard to help block migrants and refugees from setting sail for Europe. The country's west coast is a major launching point for African migrants.

Bartsch also called on the EU to allow private rescue vessels to continue their life-saving work in the Mediterranean.

Private ships have faced increasing legal difficulties in rescuing migrants from sinking and unseaworthy boats attempting to reach Europe. Both Malta and Italy have repeatedly closed their ports over the past year to charity rescue vessels, accusing them of aiding people smugglers.

"The legal and logistical restrictions must be lifted, as tens of thousands of people owe their lives to the efforts of nongovernmental organizations (NGOs)," Bartsch said.

On Saturday, the German group Sea-Watch said it was deliberately violating a ban on entering Italian waters for humanitarian reasons.

A ship carrying 47 migrants, many suffering from sea-sickness and dehydration, was heading for the southern Italian island of Lampedusa late Saturday. Italy has vowed to stop the boat through "all legal means."