Libya's battle for Tripoli — what you need to know

General Khalifa Haftar's push for Tripoli could be the most important moment for Libya since the overthrow of Moammar Gadhafi in 2011. Who are the players and what's at stake for the war-torn country? 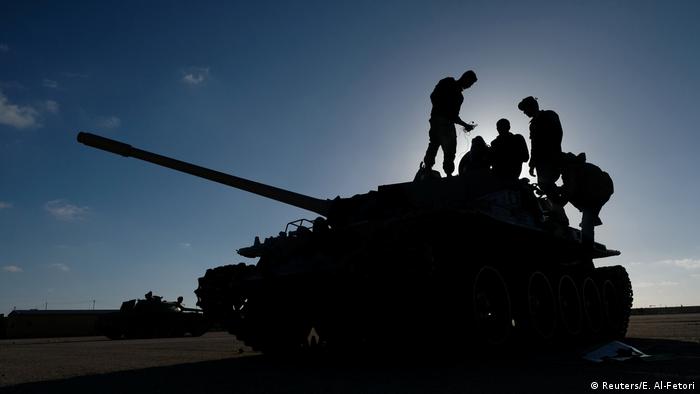 The overthrow and killing of longtime ruler Moammar Gadhafi in 2011 plunged Libya in a conflict between rival militias . What has emerged is a fragile governance over the oil-rich country that has shifted between power centers from west to east. But in April, a coalition of fighters under Khalifa Haftar made a push to take Tripoli, the seat of Libya's UN-backed government, and with it control of the entire country. Who's who in the battle for Tripoli and what do they want?

Who is Khalifa Haftar?

A former Libyan army officer who helped bring Gadhafi to power in a 1969 coup, General Haftar is seen as a strongman in the mold of his country's former leader. The pair ultimately fell out, and Haftar spent two decades in the United States. He returned to Libya during the 2011 NATO campaign to oust Gadhafi, developing a power base in the east against Islamists and the UN-backed Government of National Accord (GNA) in Tripoli. Since 2014, his self-proclaimed Libyan National Army (LNA) has taken control of Libya's significant oil production, consolidated gains across the country and announced an advance on Tripoli in April this year.

What does he want?

Haftar has said he wants to restore security, fight armed gangs and "terrorists," and has cultivated a reputation among foreign allies for combating Islamists despite the Salafist forces under his command. But detractors fear Haftar wants to rule Libya in a permanent state of dictatorship ― a Gadhafi 2.0. His recent attempt to take Tripoli was timed just before UN-backed peace talks aimed at finding a way towards a democratic centralized-government, forcing them to be postponed.

Who is Fayez Serraj?

A career public servant with little military influence of his own, Prime Minister Serraj leads the GNA in Tripoli, but is criticized by some as being a leader installed by foreign powers. While his legitimacy is challenged by a rival government in the east, he is both supported and dominated by Tripoli militias.

Who is controls Tripoli now?

Tripoli militias previously helped overthrow Gadhafi, but have since taken control of state institutions and plundered their resources. A looser coalition of rival western fighters have joined the GNA's defense in the face of another potential military dictatorship.

Who are Haftar's regional and international backers?

Egypt wants to shore up defense of its western border and is sympathetic to a strongman that might prevent Islamist integration into Libya's government, while Saudi Arabia and the UAE share similar concerns over the Muslim Brotherhood. France has expressed surprise at Haftar's grab for Tripoli but has quietly supported him since 2015, while its soldiers attempt to tackle Islamists south of Libya. France has also blocked a UN Security Council statement calling for an end to Haftar's advance, along with Russia, which is reported to be interested in selling Haftar weapons. It is unclear who the US supports.

The United Nations has been the GNA's chief backer in support of a political process to end the deep divisions in the country. Although they have been quieter in the recent conflict, Turkey and Qatar's anti-Haftar stance came from a regional Gulf rivalry over support for Muslim Brotherhood forces throughout the conflict. Italy's interest in stemming migration across the Mediterranean from its former colony has aligned it with Serraj's government, which receives support to turn back asylum-seekers.

Where do Germany and the EU stand?

While the split between Italy and France has stymied a unified response from the European Union, the bloc's foreign policy chief, Frederica Mogherini, has called for an immediate ceasefire and humanitarian corridors. Member states have failed to find a way to redistribute migrants arriving from Libya at the EU's closest ports in Italy, after anti-immigrant sentiment influenced the political climate in much of the bloc.

Who gets left out?

Thousands of civilians are trapped in the conflict zones. Many of them requested evacuation, but authorities and aid groups have been cut off by shifting front lines. Reports of indiscriminate shelling in residential areas have heightened their sense of alarm.

Doctors Without Borders said migrants locked in detention centers in conflict zones are "particularly vulnerable" due to inhumane conditions in the camps and no ability to make choices about their own safety.

Libya: US pulls forces amid fighting near capital

US army officials have announced a withdrawal of troops from the North African nation. Increased fighting has raised prospects of renewed civil war in the country. (07.04.2019)

Libya's internationally recognized government and Egypt have asked the UN Security Council to ease a 2011 arms embargo so Libya can fight Islamic State (IS) affiliates trying to get a foothold outside Syria and Iraq. (18.02.2015)

Seif al-Islam al-Gadhafi has said he wants to restore Libya's "lost unity." The son of late strongman leader Moammar Gadhafi had previously been barred from presidential elections slated for December.