Amid disputes over Egyptian air strikes in Libya, Qatar has recalled its ambassador in Cairo for consultations. "Islamic State" (IS) bases were targeted after jihadis beheaded 21 Egyptian Coptic Christian hostages. 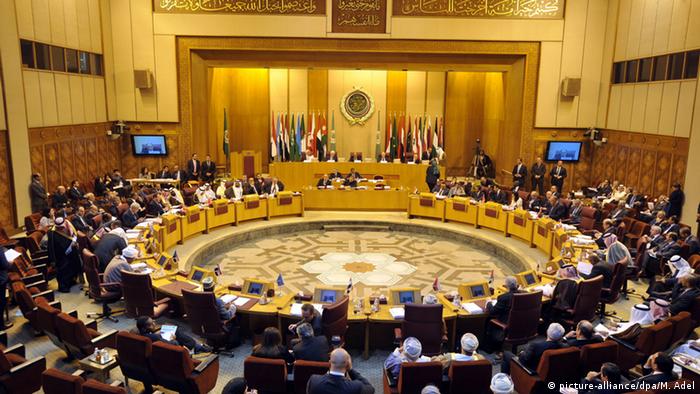 Statements at the Arab League, pictured here, regarding Egypt's airstrikes in Libya set off the row

A Qatari Foreign Ministry official said late on Wednesday that Doha was recalling its envoy from the Egyptian capital over a statement made by Egypt's delegate to the Arab League, Tariq Adel.

According to Egyptian media and the Al-Jazeera news channel, Adel accused Qatar of supporting terrorism after Doha's representative expressed reservations over a clause in a communique, which welcomed Egypt's decision to carry out air raids on Libyan "Islamic State" (IS) targets without consulting other Arab states.

In a separate statement, Qatar's Foreign Ministry said Doha stressed the need for "consultations before any unilateral military action against another member state."

It denounced the "tense" statement by Egypt's representative to the Arab League, saying it "confuses the need to combat terrorism [with]... the brutal killing and burning of civilians."

Egyptian F-16s bombed IS militant bases in the eastern city of Derna on Monday - hours after IS posted a video online purportedly showing the mass beheading of 21 Egyptian Coptic Christian hostages.

A statement released shortly after the airstrikes said that their aim was "to avenge the bloodshed and to seek retribution from the killers.

"Let those far and near know that Egyptians have a shield that protects them," the statement added.

The confirmation of the airstrikes marked the first time Cairo had publicly acknowledged taking military action in neighboring Libya, which has been beset by militia violence for months.

Following the airstrikes, Egypt said that a tough intervention was needed against jihadists Libya.

On Wednesday, Libya's internationally recognized government and Egypt also asked the UN Security Council to ease a 2011 arms embargo so Libya could fight the IS affiliates who are trying to get a foothold outside Syria and Iraq.

The IS terror organization has continued to gain ground in Libya in recent months by carrying out attacks and kidnappings. Some of the country's regions are no longer under the control of state authorities.