The United Arab Emirates secretly carried out two airstrikes against Islamist militias in Libya within the last week using bases in Egypt. The US and four European governments have warned against external interference. 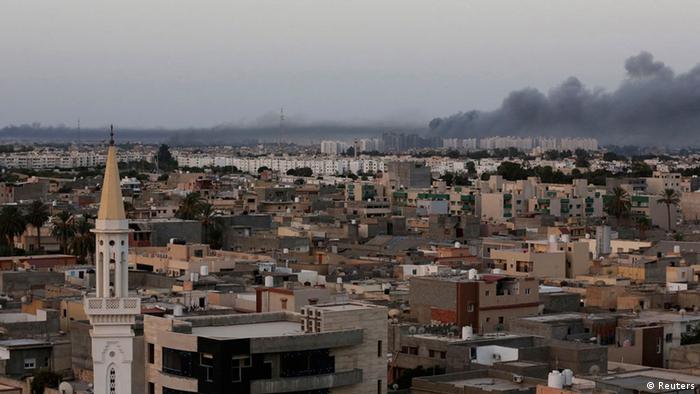 Two separate rounds of airstrikes against Islamist militias in Libya were secretly carried out by the United Arab Emirates (UAE) within the last week, using bases in Egypt, two US officials said on Monday.

Confirming a report in The New York Times and allegations made by Islamist forces, one of the two US officials told AFP news agency, "The UAE carried out those strikes."

The two officials, who verified the report in The New York Times on the condition of anonymity, said the US did not take part or provide any assistance in the bombing raids.

According to the report, which the two US officials described as "accurate," the first round of airstrikes took place a week ago and targeted areas of Tripoli, Libya's capital, which are held by militia.

UAE warplanes carried out the second round on Saturday, targeting rocket launchers south of Tripoli.

It is thought the secret airstrikes may have been an attempt to prevent militia from seizing Tripoli airport.

Fighters from the Fajr Libya (Libyan Dawn) coalition said on Saturday, however, that they captured the airport following many days of clashes with nationalist militiamen.

THE UAE declined to comment on their involvement in the airstrikes.

On Monday, a statement signed by the US, France, Germany, Italy and the United Kingdom was released - warning that interference from countries outside Libya would worsen divisions and slow down any hope of a democratic transition in the country.

According to the statement, the US and four EU countries "strongly condemn the escalation of fighting and violence in and around Tripoli, Benghazi, and across Libya, especially against residential areas, public facilities, and critical infrastructure, by both land attack and airstrikes."

The North African country is currently facing its worst violence since the fall of Moammar Gadhafi in 2011, which the government is proving unable to control. Various militias are continuing to fight against each other with fears that an all-out civil war could begin if fighting spreads across the entire country.

Libya's North African neighbors have pledged not to intervene in the crisis-ridden country. They also expressed support for Libya's elected parliament, which has been challenged by the former interim assembly. (25.08.2014)