Libya is experiencing its fiercest fighting since the fall of Moammar Gadhafi. Its new parliament has little authority. With various militias fighting one another, the political transition is on the point of collapse. 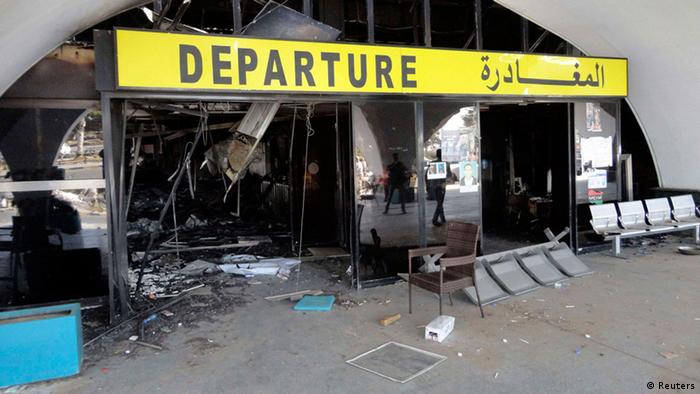 Tanks roll over the runway as black smoke drifts across the airport in Tripoli. The waiting rooms have been wrecked; many of the buildings are badly damaged.

Different militias have been fighting for weeks over this key traffic hub in the Libyan capital. Now the Islamist-dominated alliance Fajr Libya [Libyan Dawn] has captured the airport - and destroyed the hope of quieter times ahead for this North African country.

The government is having less and less success at controlling the situation. Militarily, the militias have the advantage over the security services, which are still being rebuilt. The country's security services and army were also massively weakened by dictator Moammar Gadhafi in favor of the palace guards, which were loyal to him. Now the Libyan government cannot even safeguard streets and public buildings - let alone a large airport.

"An international airport in the capital of a country is a symbol of statehood," Wolfram Lacher, a Libya expert with the German Institute for International and Security Affairs in Berlin, told DW. "The destruction demonstrates that no one is controlling the state, and that the conflict parties are prepared to destroy state infrastructure - to prevent their opponents benefiting from it.

Three years after the fall of Gadhafi after more than 40 years in power, the chaos in Libya continues to worsen. In 2011 the militias combined forces to fight against Gadhafi, but after his violent death they turned on each other.

"These are local, armed groups which, over the past two years, have gradually formed alliances," Lacher explained. The Fajr Libya alliance, for example, includes not only militias from Misrata and other revolutionary strongholds of 2011, but also Islamist forces. 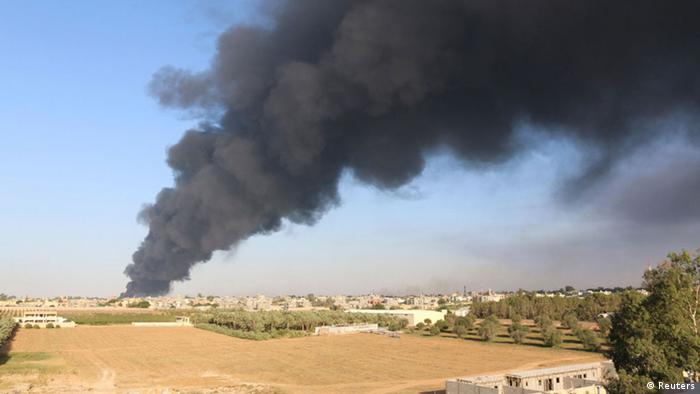 More than three years after Gadhafi's downfall, Libya is witnessing one of the worst bouts of violence

Another alliance is led by militias from Zintan. "Zintan also played a leading role in the 2011 revolution," said Lacher. "Since then, though, the group has gradually turned away from its revolutionary allies. Now it's making common cause with conservative forces such as the federalists in the east, remnants of the old army, and tribal elders - as well as groups that were close to the old regime."

This camp also includes the so-called National Libyan Army of General Khalifa Haftar, which has been fighting Islamist militias in the east since May with varying degrees of success. Haftar broke with Gadhafi in the late 1980s, after which he lived in exile in the United States for many years. He can count on the support of elements of the regular armed forces, especially the air force.

The power of the militias is so great that it is almost impossible to make out any central government. A new parliament was only elected in June, but not all of the parliamentary groups recognize it. The Islamists' results in the parliamentary elections were disastrous, and as a result they have declared the parliament illegitimate. Many observers see the offensive by militias with close ties to the Islamists as an attempt to reverse their electoral defeat by means of force.

"The parliament has now adopted a clear position against the revolutionary camp, declaring the forces in Tripoli terrorists," said Lacher. "In doing so it has become a party to the conflict. Important political forces are boycotting the parliament, which means it can no longer claim to have a central leadership role."

Because of the violence in Tripoli and Benghazi the parliament is sitting further east, in the city of Tobruk. In recent weeks thousands of Libyans have fled the fighting, the majority of them to Tunisia. Many diplomats have also left Libya. 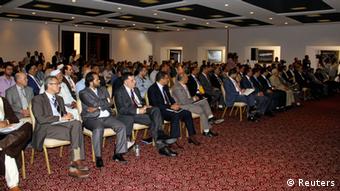 The newly-elected parliament is not recognized by all parliamentary groups

Parliamentary president Aguila Saleh Issa has called for the United Nations to intervene. "We are still waiting for an intervention by the international community that will protect the Libyan people and end the bloodshed," he told television broadcaster Sky News.

Many observers now believe there will be civil war - or even that the country, which had not long been unified when Gadhafi seized power, will fall apart. It was only in 1963 that the regions of Tripolitania, Cyrenaica and Fezzan, which had until then been broadly autonomous, were combined to form a single, central state; and Libya itself was only created during the Italian colonial period, gaining its independence, under King Idris, in 1951.

This unity is now in serious jeopardy. It is becoming increasingly clear that the government and parliament are losing control over large areas and major cities in Libya - Fajr Libya's capture of the airport is only one example. "It's possible that an alternative government and possibly even an alternative parliament will be set up in Tripoli," Lacher said. "If that happens, it means that, for the time being, the political transition process has failed."

Libya's neighbors are already worried that the chaos could spread to their own countries. At a meeting on Monday (25.08.2014) with his counterparts from Libya and its other five neighboring states, the Egyptian Foreign Minister Sameh Shukri called for the strengthening of the Libyan state, and for the militias to be disarmed.

Libya's North African neighbors have pledged not to intervene in the crisis-ridden country. They also expressed support for Libya's elected parliament, which has been challenged by the former interim assembly. (25.08.2014)

Egyptian President Abdel-Fattah el-Sissi has denied military involvement in Libya after Cairo was implicated in a deadly airstrike against Islamist militia. Jihadists have accused Libya's parliament of complicity. (24.08.2014)

Politicians in restless Libya have called on the United Nations to take measures to protect civilians. How this could be done, however, remains unclear. The international community's options are limited. (15.08.2014)