Sigmar Gabriel: To survive, the EU must become more assertive

Sigmar Gabriel declared at a foreign policy forum that relations with the US will "never be the same" after Trump. He warned institutions like the EU and the UN that they were running the risk of becoming irrelevant. 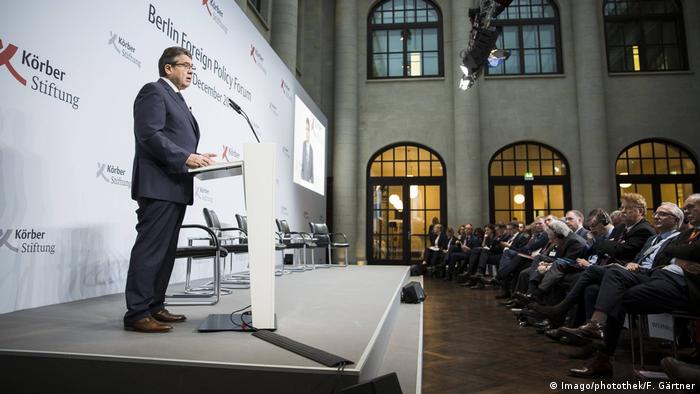 German Foreign Minister Sigmar Gabriel offered a bleak view of international relations and Germany's place in the new world order at the Berlin Foreign Policy Forum on Tuesday. In his half-hour speech, Gabriel spoke of how the West, liberalism and institutions like the United Nations had failed in their stated missions.

First, however, the vice chancellor spoke about strained relations with the United States under the administration of President Donald Trump.

"The US no longer sees the world as a global community, but as a fighting arena where everyone has to seek their own advantage," Gabriel said.

The Social Democrat argued that German foreign policy must be more daring, and not simply follow the line from Washington.

"Germany can no longer simply react to US policy but must establish its own position…even after Trump leaves the White House, relations with the US will never be the same."

But, Gabriel suggested, an inward-looking White House was no boon to Europe if the EU did not do enough to define its own interests.

"As the US has withdrawn from the international stage, nobody has turned to the European Union," Gabriel argued, claiming that the bloc no longer stood for a specific set of values and accusing members of treating the EU "as if they have a second one in their hip pocket."

"We could stand right now in front of a new nuclear arms race in Europe," Gabriel said, unless European countries stand up for the progressive ideals they claim to represent.

Gabriel viewed the UN of having similar failings in its lack of clarity and ability to get anything done. Western liberal elites have failed to understand "the desire for order and clarity," that was driving waves of populism around the world, he said.

He used the example of the Ukraine, and how after over three years the frozen conflict showed no sign of resolution as no one, including the UN, was bold enough to take serious steps. He also accused western countries of failing Syria.

"At no time during the last 7 years did the West achieve a reasonable balance between its very ambitious goals [in Syria,] and its very limited willingness to invest," he told the crowd.

Germany prefers to stay in the middle

Gabriel also remarked on the place of his own country in a changing global arena. He said that Germany did not want to take a leading role, but rather stay in the middle of an international order led not by a "G20, or a G0 with no leadership," but by a "GX" where all nations that may want to leave their mark are welcome to.

Gabriel brushed off criticism that after 72 days without a new government,  Berlin could hardly be called upon to take a prominent role in shaping global policy.

"Some countries have a government without working institutions — Germany has the opposite right now," he said.

The world is not as it once was. An impatient German foreign minister is calling for Europe to finally start acting and thinking strategically, not morally. High time indeed, yet DW's Jens Thurau has a few issues. (05.12.2017)