The world is not as it once was. An impatient German foreign minister is calling for Europe to finally start acting and thinking strategically, not morally. High time indeed, yet DW's Jens Thurau has a few issues. 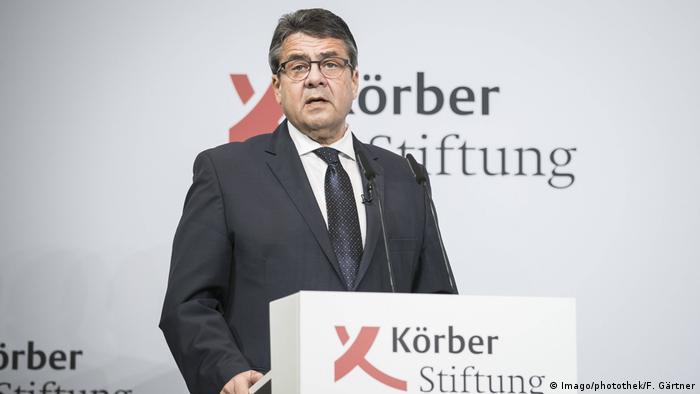 Speaking at the non-profit Koerber Foundation, German Foreign Minister Sigmar Gabriel addresseda world not in the midst of change, but one already transformed. In a nutshell: The post World War II global order, the so-called "American Century," is history. China is seeking greater global significance and the US has retreated into egoism and nationalism. And every new geopolitical vacuum is filled by another actor: by Russia in Syria and China in Africa, for instance. For Gabriel, the consequences for Europe are clear. Europe can no longer continue to shout moral objections "from the sidelines," but must clearly define its own interests and finally begin to think strategically. In other words: Europe must get its own house in order and deepen European integration – even if that idea is anything but popular at the moment. It must also seek partners where they are to be found: not on the other side of the Atlantic, which has been the historical default position. So far, so good, but here is my first objection.

Is Gabriel right to claim that the seismic changes in the US are happening independently of President Donald Trump? That the global leadership role of the defender of democracy, freedom and indeed Europe, has forever ceased to exist in its old form? Gabriel's statement that, for the first time in its history, the US will soon be populated by more people with African or Latin American roots than European is absolutely true. But are we not also seeing broad protestations against the egomaniacal actions of the current US president? Protest against his arrogance and historical amnesia? Is it not true that despite a brutal election campaign, more people voted for the highly unpopular Hillary Clinton than for Trump in an effort to avoid the worst? It is likely that Gabriel is writing off the US prematurely, even as he claims that, "the US remains our most important ally." Perhaps his analysis is simply evidence of his impatience and his desire to finally get serious about the future of the European project rather than continuing to wait.

And another thing. Gabriel is correct in his assessment that Europe must finally look inward, defend its own values and make sure that it assumes more power, for a world with no clear leaders is one that is especially precarious for Germany. But to this end, he spoke most forcefully about German cooperation with France. He mentioned the United Kingdom only once, when the topic of Brexit was broached. Would it not make more sense for Berlin and Paris to seek cooperation with all of their European allies, independent of the EU? With London, with southern European nations, but also with eastern European countries, as irrational as that might sound at the moment? If Europe, then all of it. This is the point at which observers could sense Gabriel's frustration over the fact that Germany's currently hobbled government has yet to answer French President Emmanuel Macron's far-reaching reform plans. Or, to put it more clearly – the fact that German Chancellor Angela Merkel has yet to do so. "As far as the European idea goes, the score is 10:0 for France," Gabrel shouted into the room. Again, impatience.

That sentiment may also have to do with the fact that Gabriel's speech was also a bit of a campaign speech. He would like to stay in his current post as German foreign minister. Recently, as coalition talks between Merkel's Christian Democratic and sister Christian Social Union (CDU/CSU) parties, the liberal Free Democratic Party (FDP) and the environmental Green party were taking place in Berlin, it appeared as if Gabriel's political career was coming to an end. Now, his Social Democratic Party (SPD) is set to meet with Chancellor Merkel to discuss a continuation of the outgoing CDU/CSU/SPD grand coalition. Gabriel may yet keep his job – that's how quickly things can change.

Thus, Gabriel's analysis is correct and pointed. But if it is true that the world is in flux, then surprising improvements are also possible, in the US and perhaps even in the United Kingdom. It would not be a bad idea to keep that in mind. Gabriel's call for Europe to get off the sidelines and into the game is also correct. There are enough values to be defended, and that is best done with a lot of thought and less moral posturing.