Sieren′s China: Tension rises between Washington and Beijing | Asia | An in-depth look at news from across the continent | DW | 01.08.2020 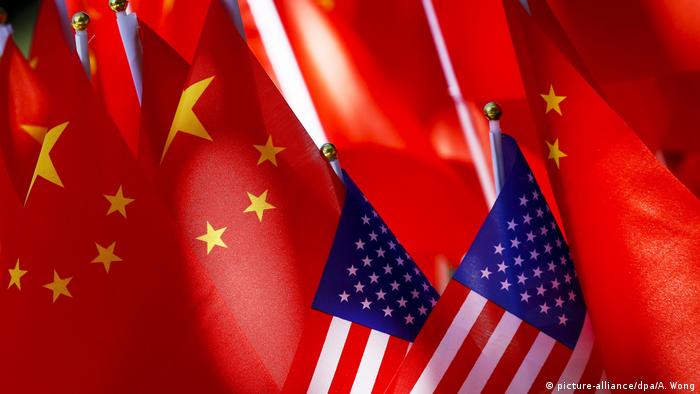 The tension between the US and China continues to rise. Last week, US authorities ordered the closure of the Chinese Consulate in Houston, Texas. Then, the US Consulate in Chengdu in western China was shut down by Chinese authorities. During a speech in Yorba Linda, California, US Secretary of State Mike Pompeo, a former head of the CIA, struck a tone not heard in the past 40 years.

"If we bend the knee now, our children's children may be at the mercy of the Chinese Communist Party, whose actions are the primary challenge today in the free world," he said.

Minutes earlier, he had said: "We must admit a hard truth that should guide us in the years and decades to come, that if we want to have a free 21st century, and not the Chinese century of which Xi Jinping dreams, the old paradigm of blind engagement with China simply won't get it done. We must not continue it and we must not return to it.

"General Secretary Xi Jinping is a true believer in a bankrupt totalitarian ideology.

"But by insisting on fair terms, as our trade representative did when he secured our Phase One trade deal, we can force China to reckon with its intellectual property theft and policies that harmed American workers," he said.

He ended with a call to the "free world" arguing that "Communist China is already within our borders."

Former US President George HW Bush did not even resort to such harsh tones after the bloody crackdown on Tiananmen Square in 1989. Why have Pompeo and US President Donald Trump chosen such a tone now? The answer is obvious: China is much more powerful than it was then. By some measures, it is responsible for 30% of the global economy, whereas the US is responsible for only 11%.

China's government is becoming increasingly authoritarian and intolerant of criticism. The US has huge domestic problems, which reach far beyond the COVID-19 pandemic. Washington is doing everything that it can to conjure up a foreign enemy so that Americans stick together, under Trump's leadership. The elections are set to take place not even 100 days from now. There couldn't be more of a need for a foreign foe.

It is no coincidence that Pompeo held this speech in former US President Richard Nixon's place of birth. The Houston consulate that he described as "a hub of spying and intellectual property theft" was one of the first Chinese consulates in the US, opening in 1979 as a direct consequence of Nixon's opening the way for the establishment of diplomatic relations with China.

"President Nixon once said he feared he had created a 'Frankenstein' by opening the world to the CCP,” Pompeo said. "And here we are."

Nixon is long dead but his national security advisor, former Secretary of State Henry Kissinger, who is going on 100, is still very much alive. Last November, he warned that China and the US were in the "foothills" of a Cold War that would have no winners if allowed to escalate.

"Everybody knows that trade negotiations, which I hope will succeed and whose success I support, can only be a small beginning to a political discussion that I hope will take place," he said.

Fear of China is rife across the US political spectrum. Trump has poked fun at his Democratic rival using the nickname "Beijing Biden,” but Biden too insists that he will be "tough on China" if he wins. The Democrat called Chinese President Xi Jinping a "thug" because of the incarceration of Uighurs in Xinjiang. Pompeo has spoken of "concentration camps." Biden accuses Trump of concentrating solely on trade deal in mind and having no respect for human rights. He has also slammed him for being too careless with regard to Beijing at the beginning of the novel coronavirus outbreak and says that he has no strategy regarding China.

According to a number of polls, the US public does not think that Trump will necessarily be tougher than Biden with regard to China. But Trump needs to be seen to be tougher, so he is escalating the rhetorical arms race between the Democrats and the Republicans.

Whoever wins the presidency, conflict between China — a rising global power — and the United States — a failing global power — will continue. Many high-ranking Chinese Communist Party officials would like to see Trump win. After all, China has benefitted from his short-sighted policies, including his shunning of global institutions, such as the World Health Organization, canceling US involvement in international climate agreements and the nuclear deal with Iran, which have alienated the US from its allies.

If Biden wins, he will probably try to reverse these developments, improve relations with traditional allies and establish new partnerships in Asia to exercise pressure on China.

Trump cannot do this, whatever Pompeo would like, because he has shown too much disdain for international cooperation.

Apart from Japan and Australia, there are few countries in the Asia-Pacific region that seem to want to get closer to the US. India is cautious. In Africa and South America, most countries seem to be more interested in developing relations with China.

Europe, too, is torn. German Chancellor Angela Merkel, who herself suffered under communism, is not likely to be persuaded by the Trump administration's current rhetoric.

Chinese Foreign Minister Wang Yi said earlier this month that US policy was driven by a "McCarthy style paranoia."

"It seems that every Chinese investment has a political purpose, every student studying abroad has a spy background, and every cooperative initiative has an ulterior motive," he said.

Merkel might agree with him on this but on issues such as Hong Kong, the treatment of the Uighurs or access to the Chinese markets, she prefers to talk. Her motto has always been that people should talk if there are problems.

The fact that Beijing is becoming increasingly intolerant of criticism with regard to its activity in the South China Sea, its Hong Kong policy and its attitude towards Bhutan as well as the harsher tone it has struck towards India, Australia, Britain and Canada is not making the situation any easier. 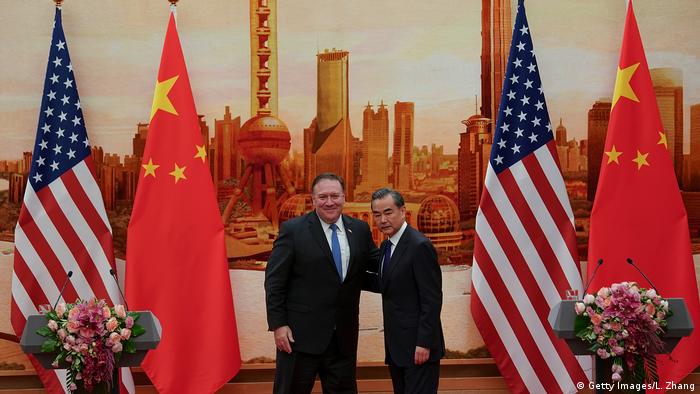 Relations between China and the US used to look slightly better

However, it is unlikely that China will get carried away by a military adventure. It has too much on its plate maintaining economic stability at home. That means Beijing is sticking to Phase 1 of the deal agreed with the US in January and hopes to cooperate in fighting the COVID-19 pandemic.

"As long as both sides have the positive will to improve and grow this relationship, we will find ways to steer this relationship out of the difficulties and bring it back to the right track," Foreign Minister Wang Yi said.

That's a start. His US counterpart, on the other hand, would like a change of regime in China and has called on freedom-loving Chinese citizens to rise up against their government. This is not likely to happen any time soon. On the contrary, it seems that the US system is losing its attraction for many Chinese citizens. Beijing knows this. Not all of the hundreds of people who applauded the closing of the US consulate in Chengdu were sycophants. As the Trump administration steps up its attacks, Chinese citizens are coming together.

Pompeo and Trump's China-bashing will not have much effect on foreign policy, but it could play an important role in domestic politics.