Beijing made the demand in retaliation for the closure of China's Houston consulate earlier this week over alleged Chinese espionage. The move was described as a response to "unreasonable measures" by the United States. 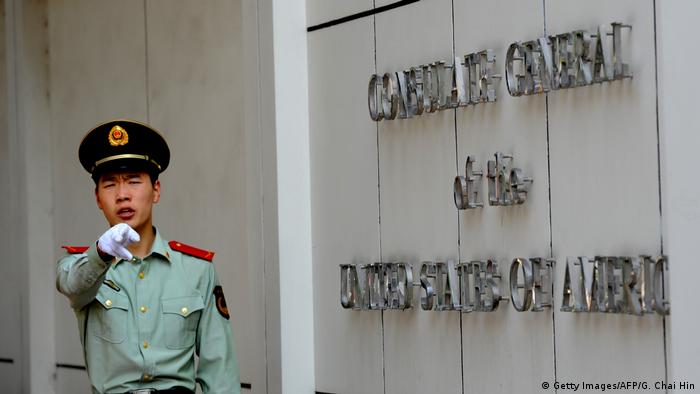 China on Friday ordered the United States to close its consulate in the western city of Chengdu, in retaliation for the closure of China's Houston consulate earlier this week.

The move is a "legitimate and necessary response to the unreasonable measures by the United States," the foreign ministry said in a statement.

"The current situation in China-US relations is not what China desires to see, and the US is responsible for all this," the statement said.

The Trump administration on Tuesday ordered the Houston consulate closed within 72 hours, alleging that Chinese agents tried to steal data from facilities in Texas including the Texas A&M medical system.

The US cited Chinese theft of intellectual property, which came a day after the Justice Department unveiled the indictment of two Chinese nationals for allegedly hacking hundreds of companies and attempting to steal coronavirus vaccine research.

"The US move seriously breached international law, the basic norms of international relations, and the terms of the China-US Consular Convention. It gravely harmed China-US relations," China's foreign ministry said in a statement.

Also on Thursday, the US Justice Department said it believes the Chinese Consulate in San Francisco is harboring a Chinese researcher, Tang Juan, who is accused of lying about her background in the Communist Party's military wing on a visa application.

Meanwhile, Chinese shares sunk over the escalation of tensions, with the Shanghai Composite Index falling 2.25% to 3,250.37 points and the blue-chip CSI300 index falling by 2.99%.

The US has an embassy in Beijing and consulates in Hong Kong and five other mainland cities including Shanghai and Guangzhou.

DW's Beijing correspondent, Mathias Bölinger, said the importance of the Chengdu consulate was more or less equivalent to the one in Houston: "It is not one of the regions where the main economic American activities are, but it is still important because it covers Tibet," he said.

"China has not chosen to do something that would further escalate the situation," he added.

The Chengdu consulate was established in 1985 and has around 200 staff, with 150 locally hired Chinese staff, according to its website.

Relations between Washington and Beijing have deteriorated sharply over the past two years over a range of issues, from trade and technology to coronavirus, China's territorial claims in the South China Sea and its clampdown on Hong Kong. Earlier this week, the US Commerce Department sanctioned 11 Chinese companies for their connection with Xinjiang human rights abuses and forced labor programs.

The US also recently imposed visa restrictions on employees from Chinese tech companies deemed to have provided "material support to regimes engaging in human rights abuses globally," including the telecommunications company Huawei.

In a speech on Thursday, US Secretary of State Mike Pompeo said Beijing was using "slave labor" practices and keeping ethnic minorities in "concentration camps" in Xinjiang, as well as ripping off "our prized intellectual property and trade secrets."

Washington and its allies, he said, must use "more creative and assertive ways" to press the Chinese Communist Party to change its ways, calling it the "mission of our time."

"Pompeo made a speech in which he carried out a malicious attack on the Chinese Communist Party and China's social system, and made groundless accusations against China's domestic and foreign policies," he said.