Even 70 years after the Universal Declaration of Human Rights, none of it seems to be negotiable but emerging countries such as China are judging it according to their own successes and mistakes, says DW's Frank Sieren. 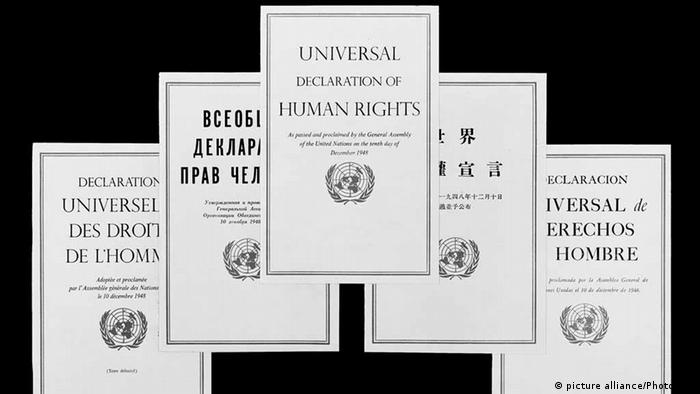 Not only the government but also the people of China have different ideas from those in the West when it comes to the role of the individual and the community or democracy and authoritarianism. This has to do with historical experience.

There is also a difference if 80 million people have to get on board or 1.4 billion. Moreover, the state of development is also important. China might be the second most important economy in the world, but its GDP is similar to that of Bulgaria, one the poorest countries in Europe.

"Every country primarily thinks about this question on the basis of its own experiences in the past — on the basis of its achievements, yes, but also its mistakes," said German President Frank-Walter Steinmeier in a recent speech that he gave in China.

Stammtisch — China in your hand

"In a few days, we will mark a milestone and auspicious moment from the past — the adoption of theUniversal Declaration of Human Rights 70 years ago. It took two devastating world wars and millions of deaths before the world’s countries signed up to this joint basis predicated on the rights of the people. We see what has grown from this basis — the multilateral system, the Charter and institutions of the United Nations, agreements and regulations on topics ranging from trade to climate protection. None of this has ever been perfect or equally available to everyone. Nor has it ever been a panacea. But despite all its imperfection, it is still an amazingly valuable achievement."

There is no doubt that it was Western ideas of human rights that influenced the Charter. The Drafting Committee included one Canadian, two French people, one US citizen, one Lebanese and one Chinese diplomat and philosopher (P.C. Chang). However, the latter was in a very weak position because at this time China practically played no international role. There was no Russian at the table, no Indian, no Iranian, nobody from Africa or South America.

The times, they are a-changin'

Seventy years later, the West can no longer expect the world to follow when it says that it has developed values that are so convincing that there is no alternative. "The world around us is changing. New opportunities are arising and old certainties are now less sure. In many cases, we do not even know what is just around the next corner. To be able to navigate at all under these conditions, we need one thing in particular — assurance about our own viewpoint and role in the world," Steinmeier said.

"Our countries enjoy closer ties than ever before," he continued. "However, it is precisely this increasing level of interconnectedness that makes differences apparent. When we consider the make-up of our societies and the role of the individual, we sometimes discern clear contrasts. Dealing with this complexity and this tension requires both sides to exercise particular caution."

This means that we have to talk more and more with each other than we have done until now. Germans have to explain to China why they think in such a way and find out why many Chinese people think differently.

Speaking about ethical digital transformation, Steinmeier did not say that European ideas or even German ideas were correct but spoke of "our direction" and said that Europe needed its "own convincing answers" to these questions, which might be different from those in China. To admit that there are different perspectives is the first step towards a compromise. It means respect for the other position. However, it is not easy to find the right balance between insisting on one’s own values and giving them up especially as the West has been used to defining the rules for several hundred years.

It seems as if Europe is handling the change of situation in global politics a little better than the US, or at least the US president, when it comes to admitting a change of perspective. There’s also a historical reason: We have more practice. France and Germany ceased to be arch rivals over 70 years ago. They are now friends and partners. This historical experience helped Steinmeier to strike the right tone.

In the past few years, hundreds of thousands of ethnic Uighurs and Kazakhs have allegedly been locked up in "reeducation camps" in China's Xinjiang province. DW met some of their relatives and former prisoners. (17.09.2018)