Coming of age: The Universal Declaration of Human Rights at 70

Drawing on a variety of cultural and political philosophies, the milestone document outlining the rights of the individual was a landmark when it was signed 70 years ago and remains a moral guidepost today. 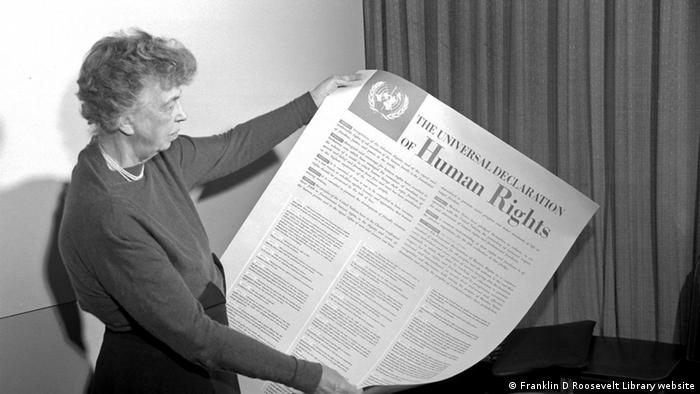 The world looked like a completely different place 70 years ago when the UN General Assembly adopted the Universal Declaration of Human Rights on December 10, 1948. World War II had left many nations in ruins and the United Nations itself was still in its infancy. And yet representatives from countries the world over, people with a diversity of social, political, legal and cultural backgrounds, met to create a milestone document that enshrined a set of rights for every human being.

The most translated document in the world — available today in 500 languages — the Universal Declaration of Human Rights proclaims a series of inalienable rights for everyone "without distinction of any kind, such as race, color, sex, language, religion, political or other opinion, national or social origin, property, birth or other status."

These rights, outlined in 30 articles following a brief preamble, encompass nearly every aspect of an individual's life. Beginning in Article 1 with the statement that "All human beings are born free and equal in dignity and rights," the declaration goes on to prohibit slavery, torture, and arbitrary arrest while advocating for the right to seek asylum, to marry and to own property. It addresses the right for an individual to his or her privacy, freedom of movement and religion, as well as the freedom of expression and access to information.

Written in response to the genocide and catastrophic consequences of the war, the foundational document seeks to create a common ground for understanding human rights the world over. Its creators sought to answer the question, as Eleanor Roosevelt put it, as to "where, after all, do human rights begin?"

A cornerstone to base peace on

"Many of us thought that lack of standards for human rights the world over was one of the greatest causes of friction among the nations," Roosevelt wrote in, "The Promise of Human Rights," published in Foreign Affairs magazine. The US representative to the UN's Third Committee, Roosevelt oversaw committee meetings and voiced her opinion on what the declaration should include. Drawing on her experiences as first lady of the United States throughout World War II, she offered unique insights into the political tensions that existed during the document's creation and maintained high hopes for its importance. "[R]ecognition of human rights might become one of the cornerstones on which peace could eventually be based," she wrote. "I'd like to think that the declaration will help forward very largely the education of the people of the world."

Her Chinese colleague, P.C. Chang, held a similar hope for the declaration. Citing a Chinese proverb that "laws alone are not sufficient to bring about results," Chang later noted the declaration's main goal was to "build up better human beings, and not merely to punish those who violate human rights."

Although implementation and acceptance of the articles laid out in the declaration have been left up to individual nations, it has served as a foundational document for the creation of laws both at the national and international levels. According to Harvard Law Professor Mary Ann Glendon, who collected the papers of the committee members during the document's drafting in the book "A World Made New: Eleanor Roosevelt and the Universal Declaration of Human Rights," the declaration's greater effect has been its moral authority. 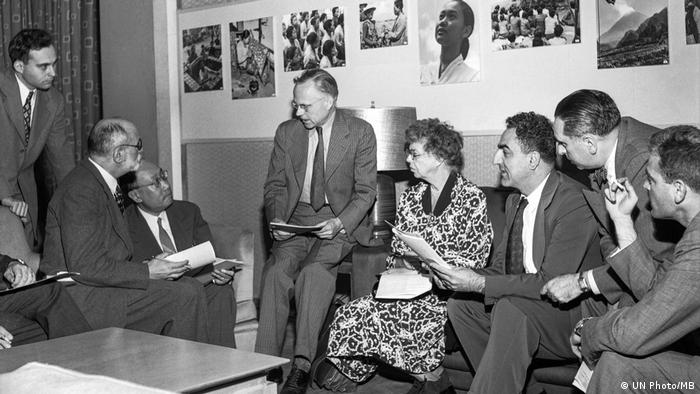 P.C. Chang, third from left, with fellow authors of the Declaration, including Rene Cassin (2 from left), Eleanor Roosevelt (center) and Charles Malik (3rd from right)

"Its nonbinding principles, carried far and wide by activists and modern communications, have vaulted over the political and legal barriers that impede efforts to establish international enforcement mechanisms. Most, though not all, flagrant and repeated instances of rights abuse now are brought to light,and most governments now go to great lengths to avoid being blacklisted as notorious violators," Glendon writes.

Written in an easily comprehensible tone, the declaration, as it exists in its final form, was intentionally brief to allow anyone to understand its greater meaning. The document was thus aimed not only at nations but at the citizens of the world.

French philosopher and committee member Rene Cassin believed that only through individual acceptance of these rights as a moral guidepost could progress occur.

"In the eyes of the declaration’s authors, effective respect for human rights depends primarily and above all on the mentalities of individuals and social groups," he wrote.

Given the historical context – numerous conflicts arose over the course of the two years during which the declaration was written, from the division of Korea, the Soviet blockade of Berlin and the Arab-Israeli conflict of 1948 – it was remarkable that the nations of the world could agree to the freedoms granted by the declaration.

Although the world is a different place 70 years on, the declaration remains a comprehensive statement on what rights are in need of protection. While some legal experts today have argued that in a rapidly changing world its efficacy will only be protected with continued reappraisals, in its essence, the document remains vital.

This article is a part of Deutsche Welle's DW Freedom project which aims to highlight the topics of freedom of expression and media freedom around the world. You can also follow the project on Twitter and Facebook.