Should NATO be doing more to tackle the coronavirus? | Europe | News and current affairs from around the continent | DW | 01.04.2020 While European Union leaders dithered, Italians died. Their government's pleas for help from Brussels and other capitals went unanswered for weeks.

By comparison, Russia and China rushed assistance right over.

Now, NATO foreign ministers in a virtual meeting on Thursday are expected to issue a statement, warning potential bad actors not to try to exploit the fragile situation created by the initial disagreements and disarray.

"For a very long time, nobody did anything," said Elisabeth Braw, the head of the Modern Deterrence project at the Royal United Services Institute in London. "And then the Russians came and sent 100 military officers from the medical branch of the armed forces."

Braw underlined that some of the Russian provisions seemed an odd match for Italy's most critical needs and part of the Chinese supplies proved defective, but added that, "if you're Italian, you're receiving nothing else. I think it would make sense to say we'll take whatever we can get."

Retired US Army General Ben Hodges, who formerly commanded American forces in Europe, is puzzled that Washington also lagged in backing up a major NATO ally.

"I can't explain that. I wish like hell that, at the first sign of trouble, the US in a big positive way had reached out," he said. "The US has always been the first one to show up after a tsunami, after an earthquake. And I think we missed an opportunity there."

It seemed like a missed opportunity not just to save lives, but to better shield European citizens against the all too familiar onslaught of Russian and Chinese disinformation amplified by Italian, and later Spanish, feelings of anger and abandonment. Facing no competition from fellow rescuers on the ground in the early days of their transports, Moscow's and Beijing's messaging machines pumped out the narrative that they cared for beleaguered European citizens whose own neighbors didn't.

Contributions from allies to Italy and Spain have in the meantime picked up, but the initial damage has been done.

"We've got to be more forward leaning," Hodges said "We have to think in terms of this as competition in the information space and because we don't necessarily think about it in terms of information competition, they literally stole a march on us."

"It should be a major concern for NATO now that one of its most generous and most significant member states has had to rely on aid from Russia because fellow European countries didn't come through," she said. Empowering the Supreme Allied Commander Europe to assess the amount of resources possessed jointly by the 30 allies and to allocate them as needed would be most efficient and equitable, she added.

When asked by DW about this possibility in a pre-ministerial meeting on Wednesday, NATO Secretary-General Jens Stoltenberg said the alliance's priority is to make sure the "health crisis doesn't become a security crisis." But he wasn't enthusiastic about suggestions NATO could take on a central planning role, saying only that he expects foreign ministers to "look into what can be done to provide more support and to speed up the support we provide."

The alliance does have structures in place that have now been called into use, in particular a joint strategic airlift capability funded by 10 NATO Allies and two partner countries which jointly own and operate three C-17 heavy cargo aircraft under NATO auspices. Romania became the first country to use its share of hours for COVID-19-related emergency missions rather than military transport, bringing in tons of equipment purchased from South Korea. 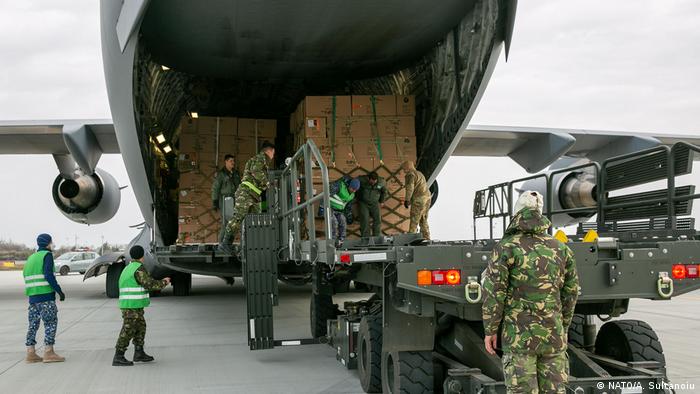 Romania used some of its allotted hours in a shared NATO strategic airlift capability to ship in emergency aid from South Korea.

Romanian Lieutenant Colonel Costi Spinu said the program had proven hugely important for his country. "There is no greater sense of emergency than we are all facing right now," he said. "This pandemic is a threat not only to our health, but also our security. So I think through examples like this we can see how we can put together resources and do better when we help each other rather than trying to to fight only by ourselves."

But with the pandemic the primary public focus, Russia-watchers warn that's all the more reason to stay vigilant.

There's been an uptick in Russian warships entering allied waters and warplanes buzzing NATO airspace. The largest joint exercise involving American troops in 25 years, Defender 20, would have been underway now but had to be severely curtailed due to the fear of infection. Sensitive issues related to Turkey's activities in northern Syria, the resumption of training of Iraqi armed forces and management of the international drawdown from Afghanistan have all dropped lower on the agenda as the world reels from the health crisis.

Meanwhile, Russia's next major shipment of medical equipment and masks was making its way to the US on Wednesday.