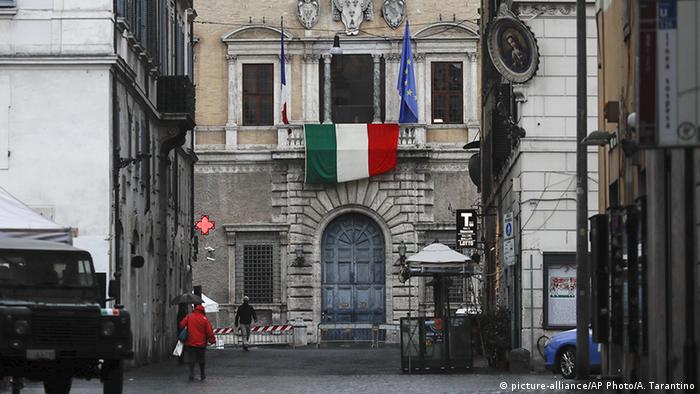 The coronavirus pandemic has already claimed thousands of lives and triggered a global recession, but also opened up not-quite healed wounds between members of the European Union.

Italy, the hardest-hit EU country, wants massive help from Brussels to keep its economy afloat. Specifically, Italian Prime Minister Guiseppe Conte is pushing for a joint borrowing system that would allow poorer EU nations to take out cheap loans with the richer members guaranteeing the funds would be returned. Several other countries, including Spain, Portugal and Greece have also signaled their support for the scheme.

Speaking to Il Sole 24 Ore newspaper, Conte called for the EU to take immediate action, otherwise the coming generations could be forced to bear the "immense cost of a destroyed economy," he warned.

"If Europe does not rise to this unprecedented challenge, there is a danger that the European house loses its foundations before the eyes of our citizens," Conte told the daily.

'Hard' clash between Conte and Merkel

However, member states including Germany and the Netherlands have already bluntly refused the so-called "corona bonds" scheme. The issue prompted a row at the Thursday video conference which included Conte and other top EU leaders.

According to the Italian prime minister, he and Germany's Angela Merkel had "not just a disagreement but a hard and frank confrontation" during the talks. Eventually, Conte rejected the pledge proposed by other EU leaders, saying that it did not go far enough, and publicly gave the EU a 10-day deadline to come up with an alternative solution.

The idea of an EU borrowing scheme was already floated and dismissed in the years following the 2008 market crash, and remains an emotionally charged issue. In 2012, the head of Germany's central bank Jens Weidmann summed up how many German leaders and bankers feel about it.

"One does not just trust someone else with their credit card when you don't have the option of controlling their expenses," Weidmann told Le Monde at the time.

Following the Thursday conference, Merkel said she was not in favor of the corona bonds solution. Instead, the German leader recommended using the European Stability Mechanism, the EU agency that was deployed to assist Greece's lengthy economic recovery.

Dutch Prime Minister Mark Rutte went a step further, saying that a system to share debt would mean "crossing a Rubicon" for the eurozone.

"We are against it, but it's not just us, and I cannot foresee any circumstances in which we would change that position," he told reporters.

"This type of response is completely ignorant and this recurring pettiness completely undermines what makes up the spirit of the European Union," he was quoted by the AFP news agency as saying.

French President Emmanuel Macron also added to the pressure on Berlin and other opposing countries.

"We won't overcome this crisis without strong European solidarity, in terms of health and budgets," Macron said in a joint interview with Italy's Corriere de la Serra, La Stampa and La Repubblica.

"This could involve a capacity to assume common debt — whatever it is called — or an increase in the EU budget to provide real support for the worst-hit countries."

The pressure on Merkel's government might also be mounting from the inside, after German President Frank-Walter Steinmeier also called for joining forces across the bloc.

"We must look beyond the next border fence," Steinmeier said in a video posted on social media on Thursday. "The virus has no nationality, and suffering does not stop at borders."

He praised German hospitals for treating Italian and French patients and added that he would like to see "more such concrete solidarity in the European spirit."

Separately, Merkel's long-time ally and former defense minister of Germany, Ursula von der Leyen, did not exclude the possibility of "corona bonds" from her current post as the head of the EU Commission.

"The word corona bond is actually just a buzzword," she told Germany's dpa news agency on Saturday, adding that reservations in Germany and other countries were "justified."

At the same time, the EU's goal "has always been to bring us together economically," von der Leyen said.

"Italy stands in this coronavirus crisis through no fault of its own, the crisis that has hit the country right through its industrial heart, the medium-sized businesses in the north," she added. "These healthy companies need to be saved."

When asked directly on her expectations regarding the scheme, von der Leyen noted that EU officials are working on developing a policy proposal that would be presented to EU states' leaders in the next 14 days.

"One should wait this out," she said.

To many, the ongoing squabbles and lackluster pledges of help sound like a recipe to repeat the eurozone crisis which only faded away after years of conflict with the European bloc. It is far from certain, however, that the EU would be able to push through another crisis of this magnitude.

Is Russia using the coronavirus pandemic as a chance to incite unrest in the West by spreading fake news and misinformation? EU observers of Russian media say that's what it looks like. (20.03.2020)

EU closes borders to foreigners to halt coronavirus spread: What to know

All EU member states have agreed to close their borders to non-EU visitors in an attempt to slow the spread of the deadly coronavirus. Brussels hopes the move will convince the bloc to keep its internal borders open. (18.03.2020)