Mayor in seven German cities pled with the government for the right to welcome underage refugees from Greece. The move comes after the federal parliament rejected a motion to accept minors from Greek refugee camps. 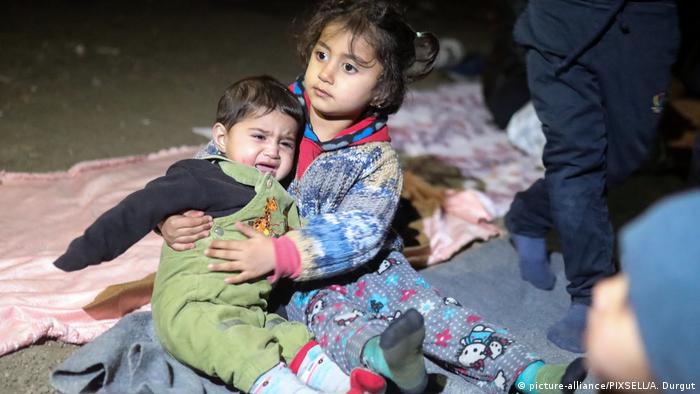 A plea letter signed by the mayors of seven German cities has called on the federal government to allow the cities to accept underage migrants from refugee camps in Greece.

The mayors of Cologne, Düsseldorf, Potsdam, Hanover, Freiburg, Rottenburg and Frankfurt (Oder), as well as the interior minister of Lower Saxony, Boris Pistorius, signed the appeal. The plea came two days after the Bundestag, Germany's lower house of parliament, rejected a motion to admit thousands of underage asylum-seekers from Greek refugee camps.

"The situation on the Greek islands" has "dramatically worsened in the last few days," read the joint statement, excerpts of which were published by the Hanover-based RND news network. "For children and women, in particular, the completely overcrowded camps, which lack the most necessary infrastructure, medical care and shelters, are untenable."

Safe havens at the ready

The letter pointed out that around 140 German cities have already declared themselves "safe havens" and want to help additional refugees. The mayors demand that the government create legal avenues immediately to allow these cities to accommodate refugees.

According to the statement, the alliance Cities of Safe Havens, a network of 130 cities and communities in Germany, as well as other German municipalities have already declared their readiness "to immediately accept up to 500 unaccompanied minors under the age of 14 years within the framework of an emergency program, who are accommodated in unacceptable conditions on the Greek islands."

It added that the reception capacities in the cities concerned have been examined, and they are "available for the accommodation and educational care of the children."

The cities would prioritize "children whose parents are in many cases no longer alive and who are alone in the refugee camps."

Waiting for a broader plan

The German government has been closely following the situation at the Greek-Turkish border after Turkey said in February it would no longer stop refugees from entering the European Union.

Turkey's announcement, effectively shredding a 2016 migrant deal with the EU, caused thousands of migrants to head towards neighboring Greece and Bulgaria — two EU member states. Both countries have sent security forces to their respective borders with Turkey to prevent a massive influx of migrants.

Greece has already seen the number of refugees from Turkey increase annually, with more than 60,000 asylum-seekers landing on its Aegean islands in 2019. Refugee camps on the islands are over-crowded and have a shortage of food, clothing and medicine.

On Wednesday, the Bundestag voted down a motion by the Green party to admit 5,000 minors from Greek refugee camps. German Interior Minister Horst Seehofer, who has taken a hard stance on migrants, has said Germany would only take in refugees as part of a broader European initiative.

Germany was one of the most sought after destinations during the European migrant crisis of 2015. The country saw more than a million asylum-seekers between January and December 2015.

Opinion: What happened to Europe's stand on human rights?

More and more migrants and refugees are gathering along the Turkish-Greek border. They are desperate — but Europe seems to have forgotten about its own core values, says DW's Jaafar Abdul Karim. (05.03.2020)