Greek officials say they have blocked 10,000 people from entering the European Union from Turkey, while Ankara reports 76,000 people have crossed the border. The EU's border control agency says it is on "high alert." 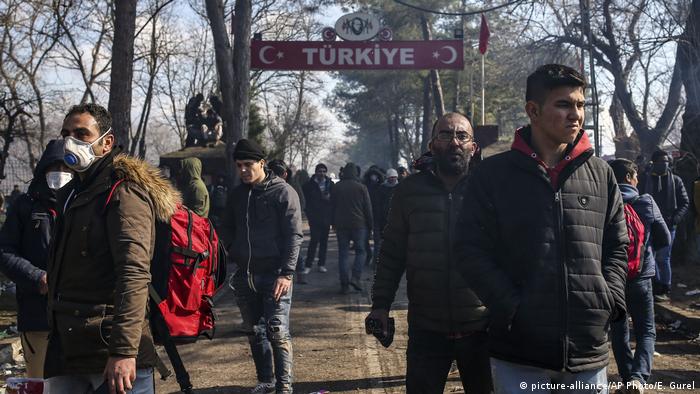 Greece blocked nearly 10,000 "illegal" entries into the European Union from Turkey on Saturday and Sunday morning, a government official has said.

The statement on Sunday comes a day after 13,000 migrants gathered on the Turkish-Greek border, following Ankara's announcement that it will no longer stop refugees from crossing into Europe.

But Turkey claims more than 76,000 migrants successfully crossed into Greece.

"As of 09.55 hours, the number of immigrants leaving our country via Edirne; 76,358," Turkish Interior Minister Suleyman Soylu wrote on Twitter, without specifying a time frame.

Meanwhile, Greek Defense Minister Nikos Panagiotopoulos accused Turkey of intentionally organizing the migrants along the shared border after finding out where Greek troops are posted.

Greece is reportedly sending text messages to migrants gathered on the Turkish side of the Evros river border, which read, "Do not try to illegally cross the Greek border."

Some migrants did manage to cross into Greece on Saturday night and Sunday morning.

"Here in Greece, 220 refugees arrived on the coast of Lesbos and were brought into a camp," DW's Greece correspondent Florian Schmitz reported. The Reuters news agency reported that more than 500 people may have made it to Greece from Turkey within 24 hours.

Thousands more remain in Turkey near the border.

"We heard on the news that the border was open," one man told DW's Turkey correspondent Julia Hahn. "Now we understand it was all just a political game."

The Greek government arranged an automated text message to be sent to mobile phones in the northern border areas of Greece. The text said the country had increased its security to a maximum and urged people not to attempt to enter.

Bulgaria, which also shares a border with Turkey, said that not a single migrant has illegally crossed the border.

The EU's border protection agency Frontex also said Sunday it is on "high alert" on borders with Turkey, as thousands more migrants are expected to attempt to enter the bloc, adding it is deploying support to Greece.

"We have raised the alert level for all borders with Turkey to high," a Frontex spokeswoman said in a statement to the Agence France-Presse news agency.

"We have received a request from Greece for additional support. We have already taken steps to redeploy to Greece technical equipment and additional officers," she added.