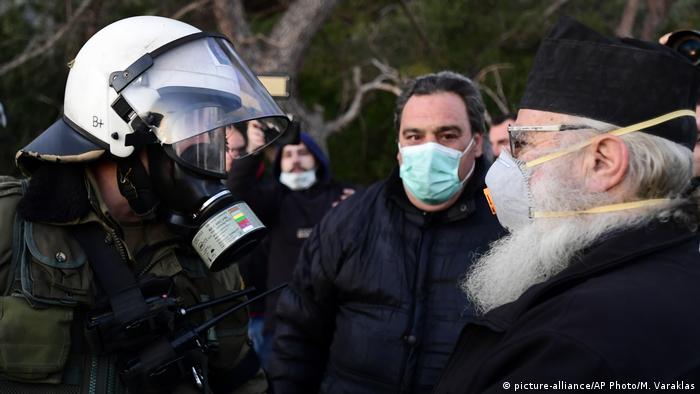 The local governments of the Aegean islands announced on Wednesday a general strike against the actions of the Greek central government. The move follows violent clashes between protesters and riot police over plans for new migrant camps.

All regional and municipal authorities and most businesses were shut down on the islands of Chios, Lesbos, and Samos.

"We want our islands back" is the motto of the protests, as well as: "The islands must stop being the camp of lost souls."

The island of Lesbos is expected to continue rallies on Wednesday afternoon against the new camps for a second day in a row.

Witnesses said police fired tear gas at some 500 protesters who tried to block the unloading of machinery at the construction sites of new migrant facilities on Lesbos.

Similar flare-ups were also reported on Chios, where residents say they are bearing the brunt of Europe's refugee crisis.

Condemning the protests as a "day of shame," Moutzouris called the deployment "extremely aggressive" and so decided on a services shut down, the Athens News Agency reported.

Greek Prime Minister Kyriakos Mitsotakis plans to replace old, overcrowded camps with new ones. The four north Aegean Greek islands host some 42,000 migrants who live in crowded conditions in and outside of camps built for only 8,000.

But some local populations, who say the there is not sufficient space on the islands, strongly oppose the government's plan for further development of the camps, saying authorities should relocate them to mainland Greece.

The Greek government also announced plans to strengthen land border controls and maritime patrol to restrict the influx of migrants.

Lesbos wants to get back to normal

Athens has announced tougher action against migrants and refugees. New deportation camps are to be set up, while asylum applications are to be processed more quickly. But some doubt the efficacy of the planned measures. (25.11.2019)