Refugees endure living hell of Greece′s Moria camp on Lesbos | Europe | News and current affairs from around the continent | DW | 18.11.2019

The Greek government has vowed to do something about its overcrowded island migrant camps. But things are not getting much better, as Max Zander reports from the island of Lesbos. 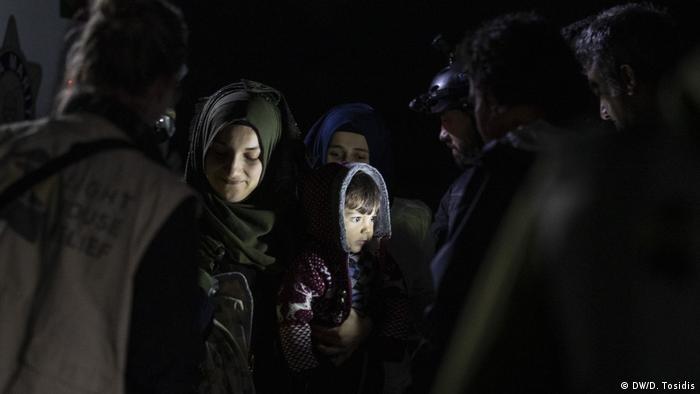 It is 3 a.m. when the Portuguese Frontex vessel arrives at Skala Sikaminea on the Greek island of Lesbos. It is crammed with people. Roughly a dozen men up front, and many women and children in the back. They look exhausted.

The mothers and children are the first to disembark. A young woman, maybe about 20 years of age, with a red headscarf and trainers, smiles hesitantly as she leaves the vessel. Once on European soil, she looks relieved that she's finally made it. One by one, they all get off, though some require assistance because they are too weak.

Ahmed from Syria is among the new arrivals. He says he lived in the Turkish city of Istanbul for four years until he was illegally deported back to Syria despite the war there. Ahmed vowed that on his next attempt, he would try to make it to Europe. Behind Ahmed, the lights along the Turkish coast are clearly visible. That is where they set out shortly before 10 p.m. that night in a rubber dinghy, he tells me, because the sea between Turkey and Greece is only 10 kilometers wide here. Then, at 2 a.m., they were rescued off the coast of Lesbos.

Thirty-two people made it across safely together with him. But now that they are on Greek soil, none of them know what will come next. 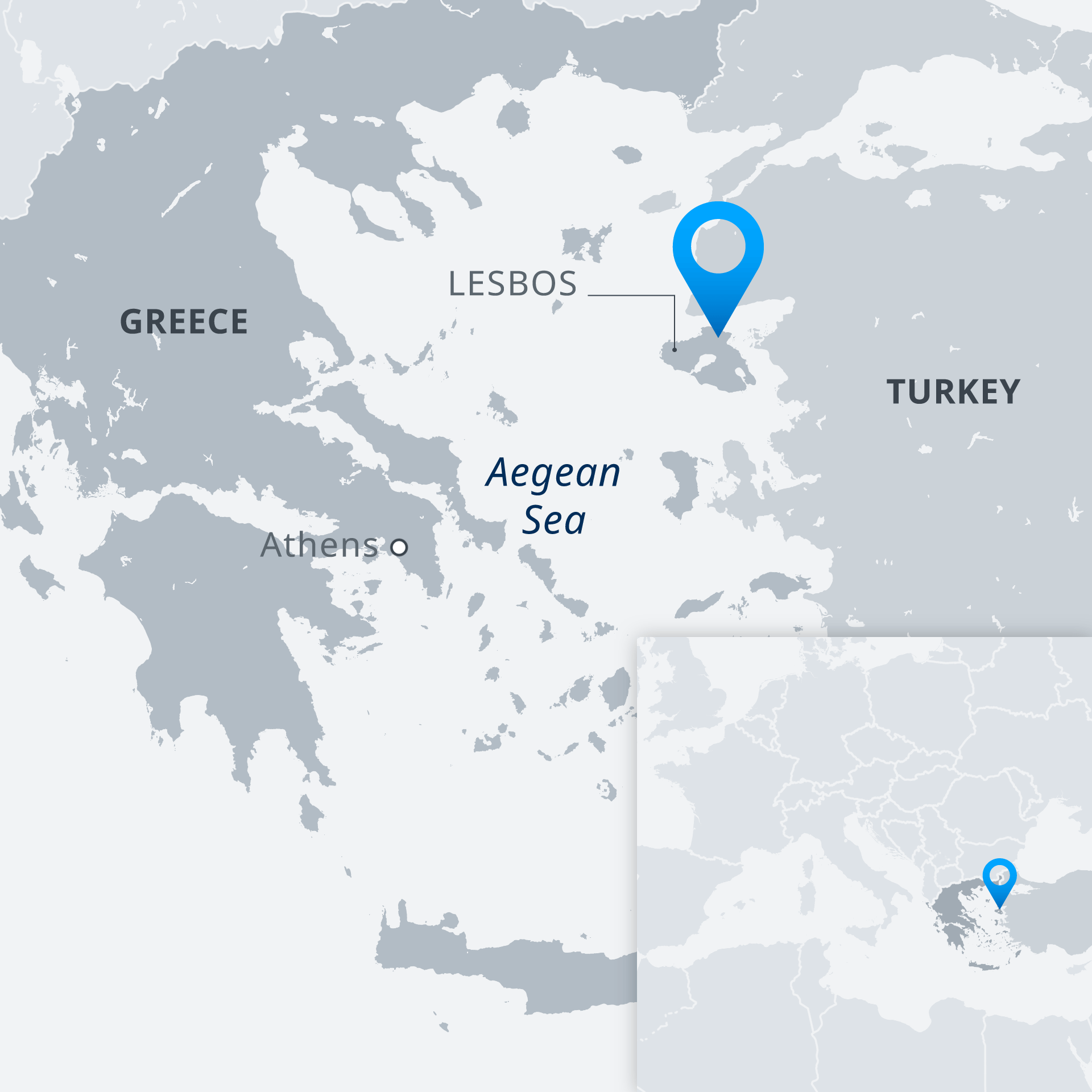 Getting out of Moria

Roughly an hour's drive south of Skala Sikaminea lies the Moria refugee camp, where most asylum-seekers are housed. Originally set up for 2,000 people, today it is home to some 14,000. The 2016 EU-Turkey migration deal had originally envisioned that authorities would quickly decide on the status of new arrivals and then either send them back to Turkey or let them travel onward to the Greek mainland. However, this plan has not worked.

Now, Moria is at overcapacity, with tents pitched cheek by jowl. Bin bags are everywhere and the temporary sanitary station has had no running water for days. At night, some camp residents get violent, and many say they live in fear. 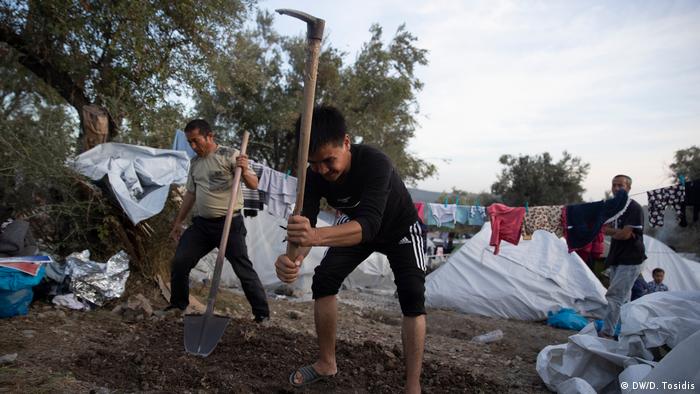 The camp is growing and new tent sites must be created

On this afternoon, however, the mood is different near the camp's entrance. A group of young Congolese people are celebrating. Dozens of women and children are standing beside their packed suitcases and bags. They are about to board a bus that will finally take them out of the camp. There are hugs, and many tears. It's a joyous moment, but also one of great sadness. 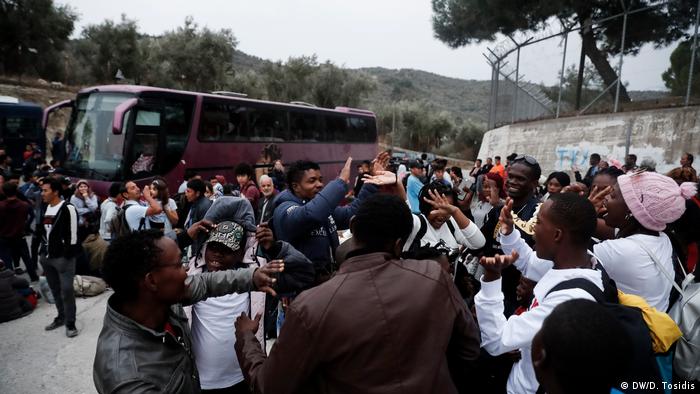 Taking leave of friends: A group of migrants celebrates the departure from the camp for the mainland

Raha Amiri from Afghanistan, along with some 200 other asylum-seekers, will also be taken to the mainland. Together with her 7-year-old daughter Ziba, Raha, 24, has lived in the camp for a year. She says she became involved in various local projects during this time and that she's deeply passionate about painting and tattoos. One day, she says, she would like to run her own tattoo studio.

She made many friends at Moria and is certain she will miss them badly. She says: "I cried all morning." Shortly afterward, she takes her daughter by the hand and makes her way through the crowds to the bus.

A stricter approach to asylum

With growing numbers of migrants and asylum-seekers again arriving on Greek islands, authorities have begun transferring ever more of them to the mainland. Yet these transfers do not keep pace with the number of new arrivals. The new conservative Greek government has therefore decided to make it harder to claim asylum in the country, and has also planned to move 20,000 migrants from the island to the mainland by the end of 2019. 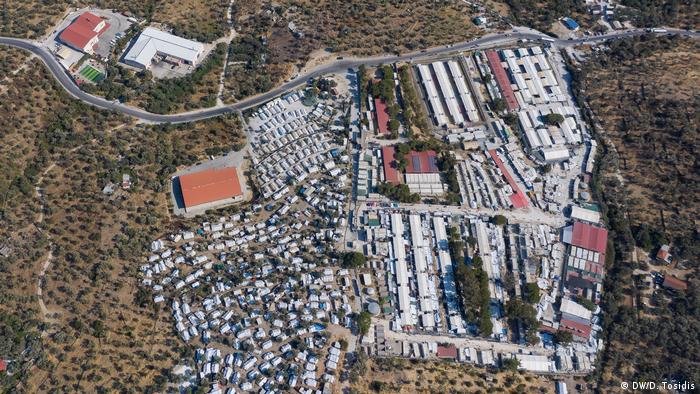 More than 14,000 migrants live in Moria and surrounds

The deputy regional governor, Dimitris Kursubas, supports the government's stance. He wants migrants arriving at the islands to be distributed throughout Greece. Kursubas used to serve as the Lesbos police chief. He says that back in the 1990s, there was a similar influx of asylum-seekers. Most of them had come from Iraq and had fled the Gulf War. "They were crippled and injured. They really needed international help," he says. But of those who are now making their way to Greece, he says, "more than 80% are economic migrants and should to return to their home countries." 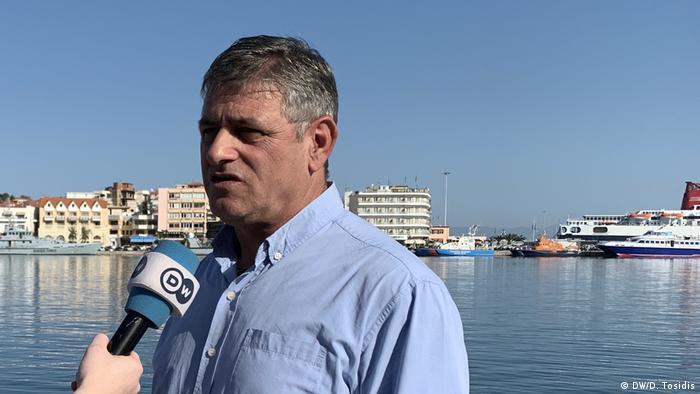 Kursubas agrees with a more radical stance on migration

Many migrants are now very worried about getting deported. The Greek government says one reason migrant camps on Greek islands are so crowded is because their asylum applications are taking too long to process. The tightened asylum rules aim to change this. Cases must now be decided within six months instead of nine. Migrants whose asylum application has been rejected must actively contest the decision; otherwise, the application process is closed. This means migrants and asylum-seekers who are not familiar with Greek law or have no money are more likely to be deported.

According to German news magazine Der Spiegel, Greek authorities have also illegally deported almost 60,000 migrants and asylum-seekers to Turkey in the past year. Citing documents from Turkey's Interior Ministry, the magazine reports that that the illegal pushback operations were carried out along the Greek-Turkish border in the country's north. New arrivals were reportedly sent straight back to Turkey without allowing them to apply for asylum. The Greek government has denied the reports.

A journey into uncertainty

But Raha Amiri is among the fortunate who will travel onward to the Greek mainland. By the time her bus arrives at Lesbos' ferry terminal, it is almost dark. She got on the last bus to leave Moria and seems stressed out. "I have so much luggage and have to take care of my daughter. It's hard but I'll manage it. I'm strong," she says, and smiles. The crowd board the ferry. Raha and her young daughter are among the last to embark. Pulling her large suitcase behind her, she slowly ascends the gangway. Tomorrow morning, they'll be in Athens. She has no idea where she will head after that.

But one thing is clear to her: She never ever wants to return to Moria.