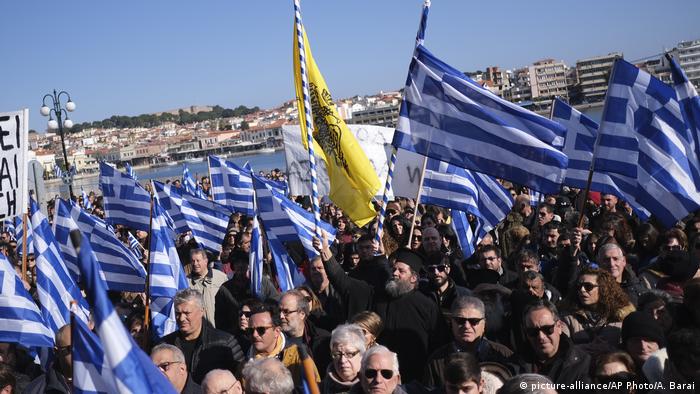 Residents of the Greek islands of Lesbos, Samos and Chios went on strike on Wednesday, angry at the overflowing migrant camps.

Under the slogan "we want our islands back, we want our lives back," the islanders shut stores and closed public services, as people demonstrated on the streets, waving Greek flags.

DW correspondent Max Zander tweeted that there was a "massive" turnout at the anti-migration policy protest in Mytilini, Lesbos.

Trade unionists and regional lawmakers demanded that the Greek government immediately transport the thousands of migrants stranded at camps to the mainland after registration. Some of the camps are at 10 times the intended capacity.

Protest organizers said they are also seeking more information on the government's announcements that it will build more camps on the islands.

'Our island can no longer be the site of lost souls'

"We can't continue to put up with this situation in our small town," said Giorgos Stantzos, mayor of Vathy, the main town on the island of Samos.

"Our island can no longer be the site of lost souls and suffering people," the regional governor of the northern Aegean Sea region, Kostas Moutzouris told Greek broadcaster ERT Open.

Governors and mayors from the region plan to travel to Athens on Thursday to present their demand to the government. The Greek government, under conservative Prime Minister Kyriakos Mitsotakis, announced in October 2019 that it wants to send 10,000 migrants back to Turkey by the end of 2020 as part of a more hardline approach to migration.