Scholz: Putin's war not just against Ukraine, but European values too

"Putin must not be allowed to get away with his cynical, inhuman war," the German chancellor in remarks to a major Catholic conference. Scholz warned Moscow is attempting to instrumentalize the impending food crisis. 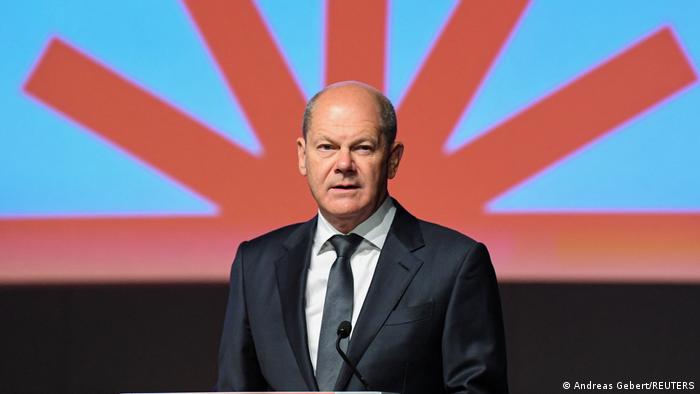 German Chancellor Olaf Scholz  on Friday emphasized that Germany is committed to supporting Ukraine, while also thanking the Catholic Church for its efforts in helping rehouse refugees from the war-torn country.

"This war is not directed against Ukraine alone, but against values and convictions that shape and define us as a society in Europe: Democracy, freedom and human dignity," he said, adding that 800,000 refugees from Ukraine have now arrived in Germany.

Scholz made the comments whilst addressing the Central Committee of German Catholics (ZdK) in Stuttgart, a five-day meeting that traditionally occurs every two years.

From the podium, Scholz said the German government had "stood by Ukraine," adding that "brute force" instigated by Russian President Vladimir Putin must not prevail.

"Putin must not be allowed to get away with his cynical, inhuman war," he said, echoing remarks made a day earlier during his speech at the World Economic Forum (WEF) in Davos.

Regarding the looming hunger crisis must be, Scholz said "the Putin narrative" must be denied.

"He has indeed found a formulation for it. He always talks about us as the global West," said Scholz. The chancellor added that Putin is seeking to paint those who oppose him as larger enemies, against whom he wants to ally with all other countries.

Earlier this month, the World Food Programme (WFP) called for the immediate reopening of Black Sea ports so that critical food from Ukraine can reach people facing food insecurity in countries such as Afghanistan, Ethiopia, South Sudan, Syria and Yemen, where millions are on the brink.

And Scholz laid the blame for this firmly at Putin's door.

"The hunger crisis that his war, which he instigated, is causing, he then tries to blame on those who stand by Ukraine," he said, emphasizing the importance of talks with leaders in countries in the global South.

Olaf Scholz: 'There will be no dictated peace'