The Arab kingdom has identified 19 offenses against decency that will be punishable with a fine. The code of conduct comes as the country begins offering tourist visas for the first time. 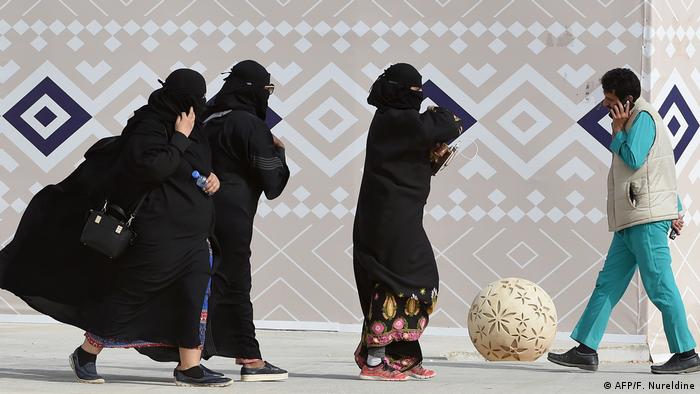 Saudi Arabia has said it will impose fines on tourists for violations of "public decency," the Interior Ministry announced Saturday.

The new code of conduct lists 19 different offenses that include dressing immodestly, public displays of affection, taking photos of others without their permission, spitting, littering and playing music at prayer time. Fines can range between 50 and 6,000 riyals ($13/€12 to $1,600/€1,500).

The announcement comes a day after the ultraconservative Islamic country launched a visa system that allows citizens from 49 countries to apply for travel visas to the kingdom.

"The regulations are meant to ensure that visitors and tourists in the kingdom are aware of the law relating to public behavior so that they comply with it," said the government Center for International Communication in a statement.

The job of monitoring for violations and imposing fines will fall to the Saudi police force and not the country's religious anti-vice squads, who have grown less powerful in recent years. The squads, called mutawa, were previously responsible for enforcing religious laws like bans on music, alcohol and gender mixing, or ensuring that people prayed five times a day as Muslim teachings instruct.

Since ascending to power in 2017, controversial Crown Prince Mohammed bin Salman has relaxed many of Saudi Arabia's ultraconservative laws and reduced the influence of the mutawa. The move is part of a gradual plan to open Saudi Arabia up to the rest of the world and reduce the economy's dependence on oil.

The monarchy hopes that by embracing holiday travel, tourism will grow from 3% to 10% of GDP by 2030. In the past, Saudi Arabia only granted travel visas for short-term business trips or religious pilgrimages to the holy sites in Mecca and Medina.

While young Saudis have embraced the new relaxed social norms, foreign holidaymakers may have a harder time looking past practices that are still extreme relative to most countries, like the ban on alcohol and hostility to socializing between the genders.

Saudi women are treated as legal minors their entire lives — they even need permission from a male guardian to travel. This rule is set to be relaxed, but will it actually help lead to gender equality in the country? (22.07.2019)

International pop artists like K-pop group Super Junior are hugely popular in the Gulf monarchy. But should international stars shun the country because of its poor record on human rights? (21.07.2019)