Russian President Vladimir Putin said he is against imposing sanctions on Georgia despite an escalating row. A prominent Georgian journalist recently went on an expletive-filled tirade against Putin while live on air. 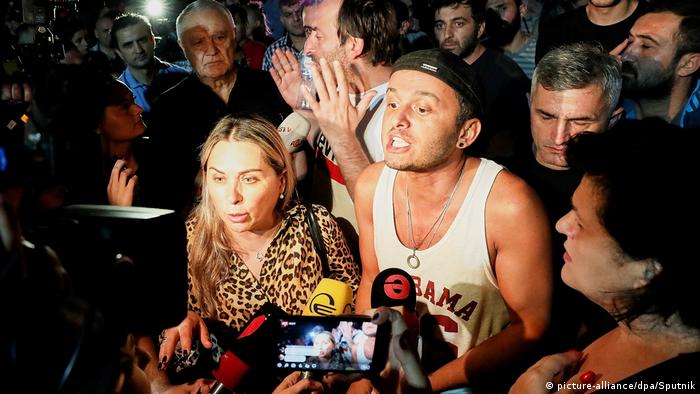 Protests in Tbilisi after a reporter's anti-Putin tirade

In an apparent bid to defuse tensions with Georgia, Russia's Vladimir Putin said he was unwilling to take any steps that "would burden our relations."

Earlier on Tuesday, Russian lawmakers asked their government to ban imports of wine and mineral water from Georgia and to limit money transfers to the country from Russia. The move comes as the latest escalation in the weekslong crisis prompted by a Russian lawmaker speaking in the Tbilisi parliament.

The sanctions against Georgia would require approval by Cabinet members and Putin.

Deputies in Russia's parliament suggested imposing sanctions after a Georgian journalist launched a tirade against Putin in his Sunday show. The prominent TV host, Georgi Gabunia, berated Putin in Russian for over a minute on Georgian broadcaster Rustavi 2.

'Nobody knew him before'

Gabunia used numerous profanities targeted at the Kremlin chief, the most moderate of which included calling Putin a "stinking occupier" and hoping that the Russian president's mother and father were burning in hell. The outburst prompted a protest near the TV channel's HQ in Georgia on Sunday evening. Rustavi 2 also stopped broadcasting for several hours citing "attack and threats" directed at the organization.

Commenting on the event,  Putin said Tuesday that politics should be considered "seriously, deeply" and not respond to outbursts made by "some scum."

"Somebody came out, said something, pretended to be something," Putin was quoted by the Interfax news agency as saying. "Nobody knew about him before, now everyone is talking. When you look it like that, he got something out of it."

However, Putin also noted there were people protesting against the reporter in Georgia.

"When it comes to various kinds of sanctions against Georgia, I would not do it precisely out of respect for Georgian people."

No flights for Georgia

The ex-Soviet state of Georgia fought a brief war against Russia over two border provinces, Abkhazia and South Ossetia , in 2008. The conflict ended with Russia routing Georgian troops and setting up military bases on the disputed territory. 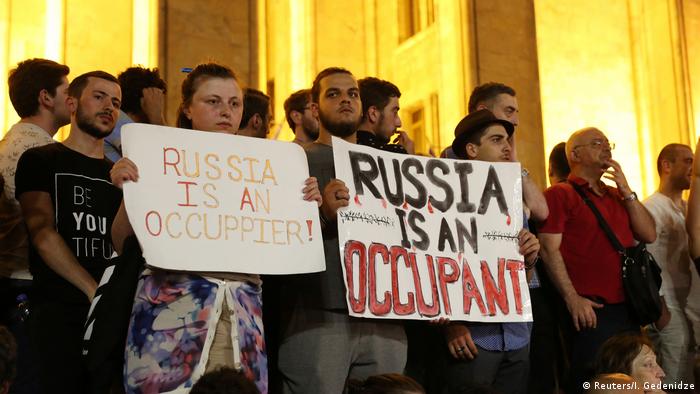 While the current ruling party, Georgian Dream, pursues a more reconciliatory course towards Russia, the resentment over the war is still strong in the smaller nation.

Last month, Georgian lawmakers hosted a delegation from Russia and had Russian colleague Sergey Gavrilov address the chamber.  Gavrilov was sitting in the speaker's chair, as per protocol, and spoke in Russian.

The event sparked violent protests in Tbilisi with crowds trying to storm the parliament building on June 20. Hundreds of people were injured. Georgian Parliament Speaker Irakli Kobakhidz resigned the next day.

Russia condemned the protest as a "Russophobic provocation." On June 21, Putin signed a decree  banning Russian airliners from flying to Georgia, which came into effect on Monday.

Reporter to keep his job

Talking to DW's Russian service on Tuesday, Tbilisi-based political scientist Stefan Meister described the reporter's outburst as a "provocation." However, he said the tirade was likely not directed at Putin or Moscow but was really meant to rally the voters in Georgia. 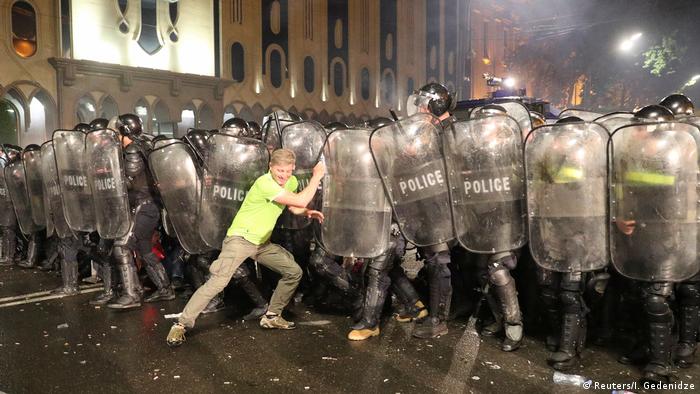 The Georgian Dream, which is often described as pro-Russian, and the opposition United National Movement are vying for power in the ex-Soviet state. In this struggle, the topic of Russia is a "trigger" which has an "insane" effect on the voters, said Meister, who leads the Georgian department of Germany's Heinrich Böll Foundation.

"We have only these two parties... that need each other just so they can be enemies, but are actually just polarizing and have no interest to find a solution," he told DW.

Georgia's Rustavi 2 broadcaster, which is known for its anti-Kremlin slant, apologized for the reporter's use of profanities and promised to keep Gabunia off the air for two months.

However, the broadcaster's CEO Nika Guaramia said Gabunia would not be fired and called his goals "legitimate."