Irakli Kobakhidze has stepped down following a night of violent protests outside the Georgian parliament. A decision to allow a Russian politician to address lawmakers fueled the anti-Moscow rallies. 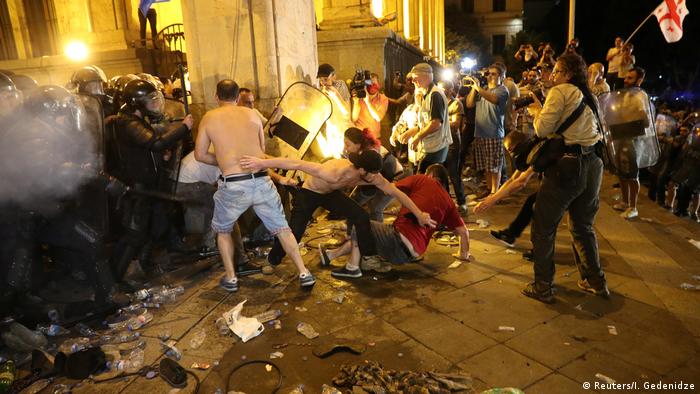 The decision followed a night of violent protest in the capital Tbilisi following a contentious parliamentary address by a Russian lawmaker.

"Speaker Kobakhidze's decision to step down is proof of the high standards of accountability set by our party and not a concession to irresponsible opposition parties' demands," the Georgian Dream party's General Secretary Khakha Kaladze told a news conference.

State media reported that more than 240 people were injured on Thursday night after police fired tear gas and rubber bullets during the largest rally in years outside the parliament building. More than 100 are still hospitalized.

Thousands had gathered to voice outrage over the visit of the Russian delegation, more than a decade after the two nations fought a war in which Georgia effectively lost two large chunks of its territory, South Ossetia and Abkhazia. 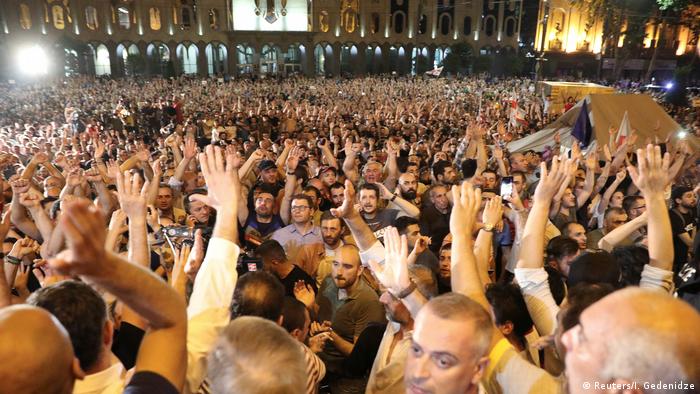 Moscow has recognized both as independent states and stationed permanent military bases in each, prompting deep anti-Russian sentiment.

Russian lawmaker Sergei Gavrilov addressed an inter-parliamentary forum of lawmakers in his native Russian from the Georgian parliamentary speaker's seat. The sitting was cut short as a result of the protests.

"Russia is our enemy and occupant," Georgian President Salome Zourabichvili said amid the protests, calling for the restoration of peace and suggesting that such destabilization actually benefits Russia.

"The breakdown of our country and society, the internal confrontation does not help anyone else but Russia. This is its most well-known weapon," she said in a statement on Facebook.

But Georgian opposition leaders said they would hold mass protests until parliament was dissolved.

"From July 8, 2019, Russian airlines are temporarily banned from undertaking flights from the territory of the Russian Federation to the territory of Georgia," said the presidential decree published on the Kremlin website.

The use of force has sparked an international outcry with Human Rights Watch accusing Georgian police of failing to protect the human rights of "thousands of non-violent protesters."

Police in six countries have dismantled a cybercrime ring based in Eastern Europe that stole $100 million from thousands of victims worldwide. The GozNym malware was delivered via email to unsuspecting users. (16.05.2019)

Rural Georgians look to the sun to ease energy poverty

In the Georgian countryside, many are reliant on firewood for heating. Can local energy cooperatives help fight the resulting air pollution and deforestation, and help families save cash, with a solar-powered fix? (22.05.2018)