The IMF has issued a warning that the world's food supplies are in peril. Russian's invasion of Ukraine is not the sole factor driving global food insecurity, but it is significant. 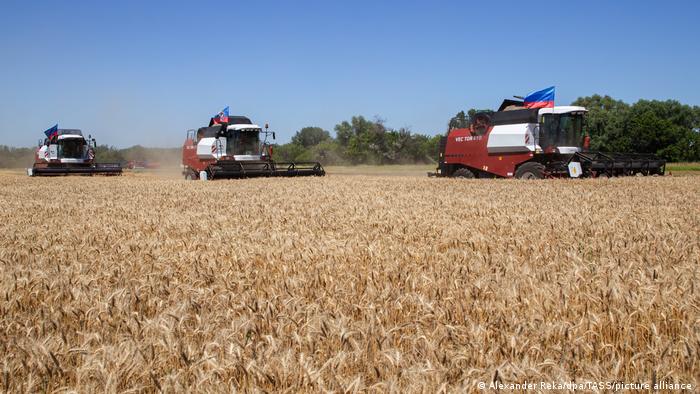 The International Monetary Fund (IMF) said on Monday that Russia's invasion of Ukraine could plunge the world's food supply into chaos, with rising prices and the inability of Ukrainian farmers to plant crops, including wheat.

Warning of "massive uncertainty" and global food insecurity should the war go on for some time, the IMF's Vladyslav Rashkovan, the alternate executive director for Ukraine on the IMF board, said events since the February 24 invasion meant that "the economy in Ukraine dramatically changed."

In a statement, Rashkovan said: "As of March 6, 202 schools, 34 hospitals, more than 1,500 residential houses including multi-apartment houses, tens of kilometers of roads, and countless objects of critical infrastructures in several Ukrainian cities have been fully or partially destroyed by Russian troops."

From the Middle East to Latin America, the UN Secretary-General Antonio Guterres warned that the war is impacting the world's most-vulnerable people because of the disruption in a country known as the breadbasket of the world.

Guterres said Monday that the "sword of Damocles hangs over the global economy, especially in the developing world." He added: "We must do everything possible to avert a hurricane of hunger and a meltdown of the global food system."

Because of price hikes resulting from economic sanctions following Russia's invasion, the Kremlin will restrict exports of barley, rye, wheat, maize, mixed grains, sugar and brown sugar in order to ensure supplies for the domestic population.

The export restrictions will begin Tuesday and are currently in place until June 30.

Exceptions will apply to countries in the Eurasian Economic Union, as well as the Luhansk and Donetsk regions of Ukraine, where Russia has unilaterally declared independence on behalf of its proxies.

Moldovan farmers feel the consequences of war in Ukraine

In Yemen, where one of the world's most dire conflicts has ravaged an impoverished population, people count on food aid to avoid starvation. One-third of wheat supplies come from Ukraine.

The World Food Program's chief David Beasley warned that "these harrowing figures confirm that we are on a countdown to catastrophe in Yemen and we are almost out of time to avoid it."

Beasley tweeted, "Reality: it's not only families in Ukraine impacted by this war."

A joint statement by UNICEF and the World Food Program called the rise in the number of people expected to die of famine conditions this year "extremely worrying." More than 150,000 people in war-ravaged Yemen face starvation.

The UN humanitarian coordinator for Yemen, David Gressly, said: "The resounding takeaway is that we need to act now."

Half of the world's sunflower oil comes from Russia and Ukraine and nearly one-third of the world's wheat. The UN has plans to allocate an additional $40 million (€43.9 million) from the Central Emergency Response fund for humanitarian aid for Ukraine.

On Monday, Argentina said it was suspending exports of soybean flour and oil as rumors grow that tax hikes are on the table with the costs of primary material costs soaring in the wake of Russia's invasion of Ukraine.

Argentina is the world's largest supplier of both products.

In a statement, Argentina's undersecretary for agricultural markets in the Agriculture Ministry said exports were suspended "until further notice."

Buenos Aires is considering increasing export tariffs by 2% from 31% to 33%. Last year, soybean flour was Argentina's largest export and soybean oil was the third-most significant export.