Russia announces Syria talks with US, regional powers in Lausanne

Russia's Foreign Ministry has said bilateral talks with the US on Syria will take place in Lausanne at the weekend. Washington has announced a second round of talks on Sunday in London to discuss the conflict. 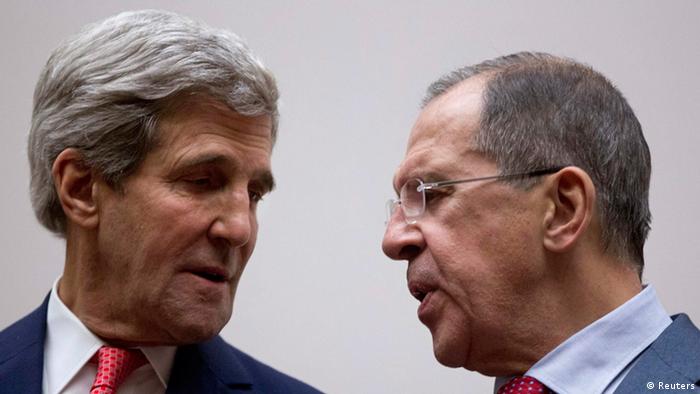 The United States and Russia are to resume talks on the conflict in Syria in Lausanne, Switzerland on Saturday, Russia's Foreign Ministry said on Wednesday.

Russian Foreign Minister Sergei Lavrov and US Secretary of State John Kerry agreed to hold talks aimed at "creating the conditions for the resolution of the Syrian crisis." They will be joined by other key regional powers.

"We would like to have a meeting in this narrow format, to have a businesslike discussion, not another General Assembly-like debate," Lavrov was quoted as saying on Wednesday. Speaking to CNN, the Russian foreign minister called for Turkey, Saudi Arabia and possibly Qatar to be included in the talks.

On Wednesday, US Secretary of State Kerry announced that another meeting was planned on Sunday in London. On both days, Saturday and Sunday, international representatives would discuss "a multilateral approach to resolving the crisis in Syria, including a sustained cessation of violence and the resumption of humanitarian aid deliveries," Kerry's spokesman John Kirby said.

This will be the first meeting between the two countries since Washington froze bilateral ceasefire negotiations on October 3.

The US pulled the plug on peace talks amid reports of Moscow's continued shelling of the besieged Syrian city of Aleppo. Tensions between Russia and the West subsequently reached heights not seen since the Cold War.

Moscow has propped up the regime of Syrian President Bashar al-Assad and unleashed an intense bombing campaign over rebel held areas in eastern Aleppo. Some 300,000 civilians are thought to be trapped in the city. Food and medical supplies are limited as airstrikes have repeatedly hit underground hospitals.

A brief ceasefire deal brokered between Washington and Moscow collapsed in September.

Putin: West to blame for Syria

Western governments, including the United States, France and Britain have accused Moscow of potential war crimes for its military actions.

In an interview with French television TF1, Russian President Vladimir Putin dismissed the allegations as "political rhetoric," and said the West was to blame for the war in Syria and the rise of radical Islam.

"I am deeply convinced that it's our Western partners, and especially the United States, that are responsible for the situation in the region in general and Syria in particular," he said.

Ban Ki-moon on President al-Assad: 'More than 300,000 people have been killed because of his failure of leadership'

The Kremlin has rejected allegations that Russia bombed an aid convoy near Aleppo, citing 'Russophobic hysteria.' Despite the tension, a meeting of US and Russian foreign ministers in Lausanne is planned. (12.10.2016)

US suspends talks with Russia on Syria: Heike Slansky reports from Washington