The US Secretary of State has demanded that a war crimes investigation be launched into Russian and Syrian government attacks on hospitals in Aleppo. He said the attacks were deliberate attempts to "terrorize" civilians. 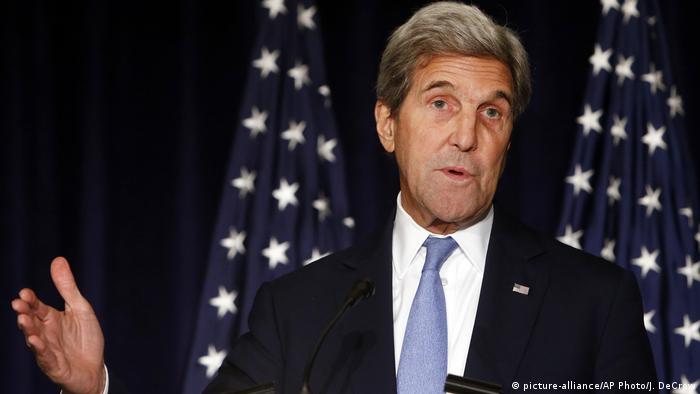 Ongoing attacks carried out by Syrian and Russian troops on Syrian civilians "are acts that beg for an appropriate investigation of war crimes," said US Secretary of State John Kerry on Friday.

In his remarks to the press, Kerry said Syrian forces struck a hospital overnight, injuring 100 people and killing 20.

"Russia and the regime owe the world more than an explanation about why they keep hitting hospitals and medical facilities, children and women," Kerry told reporters alongside French Foreign Minister Jean-Marc Ayrault in Washington.

"This is a targeted strategy to terrorize civilians and to kill anybody and everybody who is in the way of their military objectives."

The comments further illustrate the deteriorating relations between Moscow and Washington over Syria. Earlier this week, the US suspended its cooperation with Russia on Syria after a September 9 ceasefire agreement fell apart.

'Moment of truth' for Russia

The comments come ahead of an emergency United Nations Security Council vote on imposing a draft resolution submitted by France on a ceasefire in Syria.

"Tomorrow will be a moment of truth, a moment of truth for all the members of the Security Council," Ayrault said on Friday alongside Kerry. "Do you want a ceasefire in Aleppo, yes or no? And the question is in particular for our Russian partner."

The French draft resolution demands a ceasefire in Syria and an end to Russian and Syrian government airstrikes in rebel-held eastern Aleppo.

Russia, an ally of Syrian President Bashar al-Assad, launched an air campaign against militant groups in the war-torn country a year ago. The war in Syria has killed around 500,000 people since it began in 2011, forcing millions to flee their homes.