UN's Syria envoy Staffan de Mistura says if Syria and Russia do not agree to halt fighting in Aleppo, "history will judge them." The comments came as the Syrian army announced a reduction in airstrikes on eastern Aleppo. 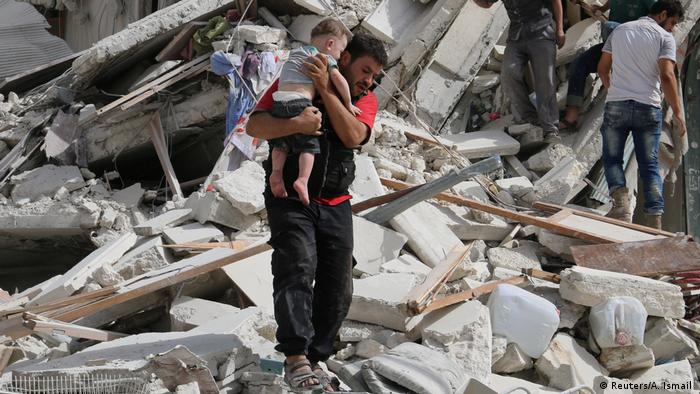 The United Nations Special Envoy for Syria Staffan de Mistura made a plea to Nusra Front fighters in eastern Aleppo on Thursday, saying he would personally accompany them if they want to leave the besieged city.

"If you decide to leave with dignity...I am personally ready to physically accompany you," de Mistura said, in a direct appeal to the fighters. He asked them not to keep the 275,000 civilians there hostage in exchange for passage out of the city, during remarks at a news conference in Geneva.

De Mistura said the rebel-held area of the city could be destroyed by the end of the year if an offensive by Syrian government troops supported by Russia continues.

"The bottom line is in a maximum of two months, two and a half months, the city of eastern Aleppo at this rate may be totally destroyed. We are talking about the old city in particular," he said.

The UN envoy said that if Syria and Russia did not accept an offer to halt fighting in Aleppo, "history will judge them."

De Mistura said Russian and Syrian forces were using the presence of around 900 former Nusra Front in Aleppo as an "easy alibi" to destroy the area, killing thousands of civilians in the process.

Thursday's comments were a revision of earlier estimates de Mistura presented at the UN Security Council last month, when he said that half of all fighters in Aleppo were tied to the Fatah al-Sham Front, formerly known as the Nusra Front.

In an interview with BBC last week, Russia's Foreign Minister Sergey Lavrov said that 50 percent of opposition fighters in the city were aligned with the former Nusra Front, citing the UN's pervious estimates.

Russia's Lavrov expressed interest in de Mistura's proposal to escort Nusra Front fighters out of the city during a meeting with his French counterpart Jean-Marc Ayrault on Thursday.

He also said Russian officials are studying a draft resolution on the confict in Syria submitted by France to the UN Security Council.

"We are ready to work on the text," Lavrov said during a press conference in Moscow with Ayrault, saying Russia will propose its own amendments to the draft and hoped they would be taken into account.

Russia previously rejected the draft, which called for the the cessation of hostilities in Aleppo and putting an end to all military flights over the city. President Vladimir Putin is set to meet with French President Francois Hollande to discuss "international issues including Syria and Ukraine," Lavrov said.

On Thursday, the Syrian army announced a "reduction" in air strikes on Aleppo. The UK-based Syrian Observatory for Human Rights said that the night from Wednesday to Thursday was the quietest since the ceasefire agreement brokered by the US and Russia collapsed more than two weeks ago.

Syrian military officials said that the reductions would allow civilians to flea the eastern area of the city, which is currently occupied by rebel forces.

However, UN reports suggest army forces are blocking the key entry and exit points in the east of the city, preventing civilians from escaping.

Thursday's announcement came as the Syrian government seized around half of a key opposition neighborhood in the north of Aleppo on Wednesday.

US Secretary of State John Kerry and his Russian counterpart Lavrov also held talks on Wednesday, despite the US having frozen cooperation with Russia in Syria.

However, Kerry's spokesman Mark Toner said that the discussions did not mean a quick resolution was on the cards.

Since the collapse of the ceasefire agreement two weeks ago, around 270 people have been killed in rebel neighborhoods.

The perpetrator of the Aleppo air convoy attack cannot be determined with certainty but strong clues have been found through the use of digital technology. The new information points to one guilty party. (05.10.2016)