Russia is sending more warplanes to Syria to bolster its air campaign, according to reports. Earlier, Moscow dismissed allegations that attributed more than 3,800 civilian deaths in Syria to Russian attacks. 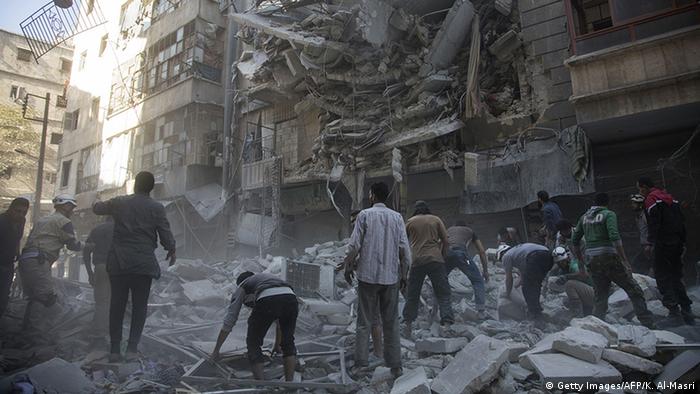 Fighting is reportedly intensifying a week into the latest Russia-backed Syrian government offensive to capture rebel-held eastern Aleppo and crush the last urban stronghold in a five-year revolt against President Bashar al-Assad.

Russia's "Izvestia" newspaper has reported that a group of Su-24 and Su-34 warplanes - armored twin-engine jets battle-tested during the Soviet war in Afghanistan in the 1980s - have arrived at Syria's Hmeymim base. They can be used to strafe targets on the ground or as a bomber, the paper reported.

Russia and Assad rejected a US-Russian brokered ceasefire agreed in early September and have continued attacks on rebel-held areas in Aleppo. 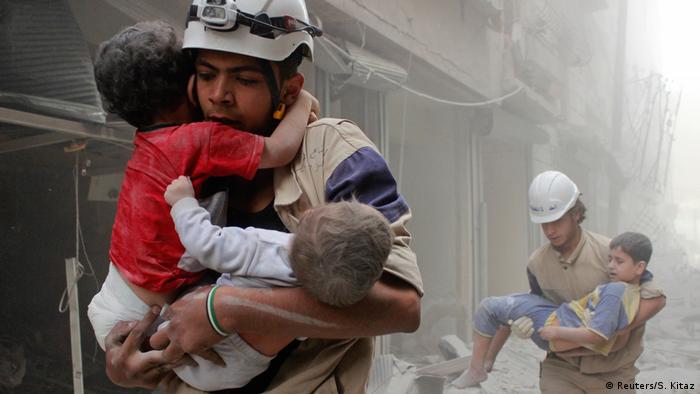 Western countries have accused Russia of war crimes, saying it has targeted civilians, hospitals and aid deliveries in recent days to crush the will of 250,000 people trapped inside the besieged city.

Attacks by Russia since it entered the Syrian conflict a year ago, backing forces loyal to Assad, have killed more than 9,000 people, the UK-based Syrian Observatory for Human Rights reported on Friday. At least 3,800 of the casualties were civilians, it reported.

The aid group Doctors Without Borders (MSF) has also accused Syria and Russia of causing a "bloodbath" in Aleppo, saying the city has become a "giant kill box."

Moscow, however, dismissed the allegations on Friday. "We do not consider as reliable the information … from this organization, which is based in the United Kingdom," said Kremlin spokesman Dmitry Peskov. It is not the first time Russia has dismissed information implicating its jets in atrocities committed during the Syrian war.

The World Health Organization (WHO) has repeated its urgent demand on the warring sides to allow the evacuation of sick and wounded people from eastern Aleppo. An estimated 300,000 people in the city are under siege by government forces, and residents report declining supplies of basic goods, including food, electricity and medicine.

The Kremlin said Friday there was no timeframe for its military operation in Syria. The main result of Russian airstrikes over the past year is that "neither Islamic State, nor al-Qaeda nor the Nusra Front are now sitting in Damascus," Peskov told Reporters.

US won't give up on diplomacy

After US Secretary of State John Kerry said Thursday that Washington was "on the verge of suspending the discussion" with Russia because of the ongoing assault in Aleppo, a State Department spokesman softened the US stance on Friday.

"This [diplomacy] is on life support, but it's not flatlined yet," State Department spokesman Mark Toner told reporters. "We have seen enough that we don't want to definitively close the door yet."

Kerry and Russian Foreign Minister Sergey Lavrov spoke by telephone for a third straight day on Friday, the latter reportedly saying Moscow was ready to consider more ways to "normalize" the situation in Aleppo, while also criticizing Washington's failure to separate moderate rebel groups from those the Russians call terrorists.

This, Lavrov said, has allowed forces led by the group formerly known as the Nusra Front to violate the US-Russia truce agreed on September 9.

Meanwhile, an audio recording released by the "New York Times" on Friday indicated that Kerry is frustrated that his efforts to end the civil war have not been supported by US military force. Speaking to a group of Syrian civilians in New York in the recording, Kerry lamented that his call for US action against the Assad government had fallen on deaf ears.

"I think you're looking at three people, four people in the administration who have all argued for use of force, and I lost the argument," he tells the group. "I've argued for the use of force ... but things evolved into a different process."

CIA Director John Brennan said in an interview that Russia's actions in Syria over the last several weeks have shown that Russian President Vladimir Putin has not been serious about negotiating a political solution to the conflict.

"I think that pushing back against a bully is appropriate," Brennan told the Reuters news agency. "I think that is very different than rushing in and bombing the hell out of a place."

Government forces and rebels fought battles on Friday in the city center and north of Aleppo, where government troops recaptured a Palestinian refugee camp on Thursday that had changed hands once already since the start of the attack.

At least 31 civilians were killed in tit-for-tat violence between Syrian government forces and rebels in Aleppo, a monitoring group reported, amid global calls for a let-up in the fighting that has killed hundreds in recent weeks. Airstrikes by unidentified jets killed at least 18 civilians in the rebel-held districts on the northern edge of eastern Aleppo, the Syrian Observatory for Human Rights said.

War in Syria: Shame on the world?

Russia marks one year in Syria with denials

An independent war monitor has attributed more than 3,800 civilian deaths to Russia since it entered the conflict. But Moscow has again rejected claims it is implicated in war crimes committed in Syria. (30.09.2016)

Pressure on Russia from US, Germany and Turkey over Syria assault

There has been increased diplomatic pressure on Russia to stop its airstrikes on Aleppo and allow humanitarian access. The US and Germany said Russia bears special responsibility for ending the fighting in Syria. (30.09.2016)

Washington has vowed to end coordination with Moscow in Syria in response to the siege of Aleppo. More than 250 civilians have been killed since the Syrian army launched a brutal campaign to retake the city last week. (28.09.2016)