The UN Security Council has called for a new truce deal for Syria and an immediate end to the fighting in the city of Aleppo. Russia has dismissed the resolution as a rehashing of futile tactics. 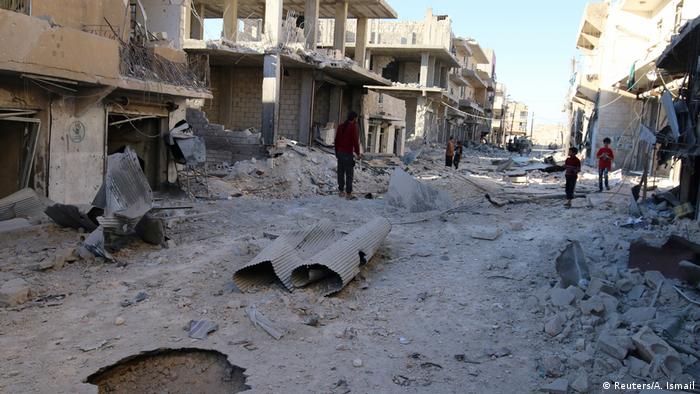 The United Nations Security Council began discussions on a new draft resolution on Monday in a desperate bid to end fighting in the Syrian city of Aleppo.

US suspends bilateral contacts with Russia on Syria

The US on Monday suspended negotiations with Russia on reviving the stalled ceasefire in Syria and on cooperating militarily to target jihadis in the country. (03.10.2016)

The city's dire humanitarian crisis has been compounded by government shelling in the rebel-held east. On top of the hospital attack, Human Rights Watch has accused President Assad of using banned chemical weapons. (28.09.2016)

The Turkish military says at least 15 Syrian rebels fighting with Turkish troops have been killed by mines laid by 'IS' militants. Turkey is engaged in an operation to clear Syrian border regions of the jihadists. (03.10.2016)

Russia is sending more warplanes to Syria to bolster its air campaign, according to reports. Earlier, Moscow dismissed allegations that attributed more than 3,800 civilian deaths in Syria to Russian attacks. (01.10.2016)

The UK and France have accused Russia of possible war crimes as the Syrian army-led offensive entered its fourth day. Thousands of civilians remain trapped in Aleppo amid a brutal campaign to uproot rebels in the city. (26.09.2016)

The proposal, drafted by France, calls for a UN-led task force to monitor a truce and threatened "further measures" should any party to the conflict violate it.

A US-Russia brokered ceasefire between government forces and moderate rebels that had given nearly a week reprieve to spiralling violence, but since it broke down Syrian allied forces have pushed a major offensive on the encircled rebel-held eastern part of Aleppo.

The aftermath of the ceasefire breakdown has seen Russia and the West trading accusations, as a humanitarian crisis in Aleppo deepens.

The US-Russia spat, which included accusations against Moscow of war crimes for its bombing raids, culminated with the US suspending its Syria cooperation with Moscow on Monday. Russia has insisted it had to resume its bombing campaign to prevent terrorists from taking over Aleppo.

US suspends talks with Russia on Syria: Heike Slansky reports from Washington

US suspends talks with Russia on Syria

The French resolution calls on Russia and the United States "to ensure the immediate implementation of the cessation of hostilities, starting with Aleppo, and, to that effect, to put an end to all military flights over the city."

Moscow: Airstrikes needed to counter IS

Veto wielding Security Council member Russia immediately shot down France's proposal before it even got off the ground, saying they did not believe it offered any viable solutions.

"The main practical thing, a new kind of innovation in that draft resolution is the idea of creating some kind of a new monitoring mechanism for the cease-fire - but there is one in Geneva and it is a mechanism which has been there for a long time and frankly has not been used very effectively," said Russian UN Ambassador Vitaly Churkin. 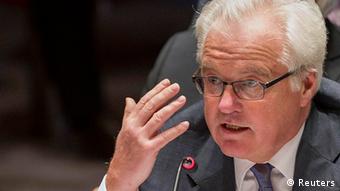 Churkin told the UN airstrikes were necessary in Syria

Churkin said his government took particular issue with one facet of the proposal,  "singling out aviation, where terrorists (on the ground) would be allowed to do whatever they want, would not be a very attractive proposition."

"I am not even sure many other Security Council members would like to see a resolution on cessation of hostilities that has no chance of working," Churkin added.

On top of blocking supply routes, the non-stop bombardment of rebel-held eastern Aleppo has also damaged local water supplies and hospitals. More than 300,000 people have died since the beginning of the Syrian conflict in 2011.