Report: Germany would rather invest in EU defense than NATO | Germany | News and in-depth reporting from Berlin and beyond | DW | 12.10.2017 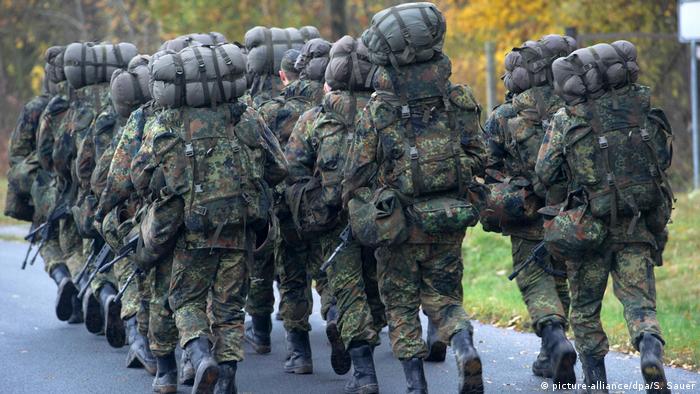 A survey of some 200 senior figures in Germany's defense industry reveals they no longer view the United States as their most important ally and believe Berlin should focus on European Union mechanisms instead of NATO. The Brussels think tank "Friends of Europe" has just released the study, along with a book, suggesting Europe's economic powerhouse has actually been a "free rider" on its partners when it comes to defense and needs to step up.

Author of the new study, journalist Paul Taylor, says Angela Merkel's world has changed beyond recognition in the last few years and that the German chancellor needs to change along with it. Taylor looks at German public and elite opinion in the new book for Friends of Europe and suggests how Merkel should forge ahead, urging her to do so to the maximum extent possible given her looming coalition-forming difficulties.

"There were two really big shocks that shook her out of a certain complacency about defense and Germany's comfortable position in the middle of Europe surrounded by NATO allies and EU partners," Taylor told DW, and those were Russia's annexation of Crimea in 2014 and the migrant crisis of 2015. "She took career-threatening decisions but it changed her view of the world, her geographical map of Europe," he said. Taylor reveals the chancellor literally had maps drawn up for her that colored in the Schengen zone so that it became starkly obvious Germany's "borders" were actually Russia and Ukraine, North Africa, the Middle East. 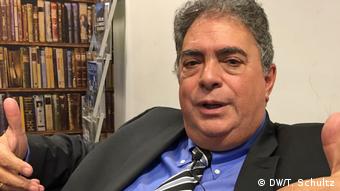 Taylor says Merkel realized she'd weakened her armed forces by years of budget cuts and reversed that in 2016. Nonetheless, it will take ages to recuperate – an estimated 15 years just to bring the air force up to par, Taylor claims.

It's not a matter of money for Germany, it's mindset. As Taylor explains, Germany has the "fiscal space" to spend more and despite the burden of German history, there's no excuse to leave the "dirty work" to other countries. "It's the shadow of history that makes it so difficult for Germans," he said, "but it's also so comfortable and convenient for Germans to say 'we are constrained by history' and let others do it for them."

Merkel has indicated she's ready to turn away from that, with her now-famous statement that Europeans must "take our fate into our own hands" due to the ambiguity of President Donald Trump's commitment to NATO collective defense. Still, with 1.2 percent of GDP spent on defense, Germany is on the low end of the NATO-mandated 2 percent of GDP expenditure and it's highly unlikely any amount of US browbeating is going to budge Berlin.

Even knowing all that, an analyst with the European Council on Foreign Relations, Ulrike Franke, says when she saw widespread opposition to meeting the NATO standard at a Berlin foreign policy conference on Tuesday, she was surprised.

Franke said she had presumed the German political establishment, attuned to the needs of fighting a seemingly endless war in Afghanistan and implementing anti-terrorism measures at home, was broadly in favor both of spending more and doing more.  She thinks the US pressure is backfiring and pushing Germans to examine EU defense options more seriously. "[I]n the German population, the Trump administration is now undermining this growing will to increase defense spending and do more," Franke told DW, "because [Donald] Trump is considered a warmonger, and Germans are worried the US under Trump may start a war and drag NATO and thus Germany into it."

Franke believes Germans are willing to take on a stronger role, but says this should be understood in context. "This is in comparison to the even lower level of willingness before," she explained, and "compared to other countries, it's still at a very low level."

PESCO to the rescue?

Alice Billon-Galland, a research fellow with the European Leadership Network (ELN), calls the history of European defense a "series of missed opportunities," but notes there are encouraging new initiatives. One of those is "PESCO," or Permanent Structured Cooperation, which is based on sharing resources and filling gaps in pan-EU capabilities. With the German Marshall Fund, Billon-Galland has just analyzed the prospects for PESCO, which has the backing of Germany and France. "There is a general idea that now is time to actually do things," she told DW. There has already been an announcement of a joint German-France procurement of fighter jets.

Taylor believes no matter however and wherever Merkel and her new government partners choose to invest in defense, things need to change. He advocates going forward with a so far unsuccessful proposal to have parliament pre-approve certain military actions for German soldiers serving in NATO or other multinational forces. Currently, all German military actions must be approved by the Bundestag. Taylor also suggests loosening restrictions on the authorization of arms exports and improving efficiency EU-wide by creating common EU arms export rules and enforcement. Germany is already one of the world's leading arms exporters.

Taylor writes that "in the 12 months that followed the Brexit vote, the EU made more progress on paper towards establishing a European defense union than in the previous quarter century." While he notes the removal of British "obstructions" will smooth decision-making, he also counsels Berlin and Paris to maintain cooperation with the UK, Europe's biggest spender on defense.

While his book seeks to outline deficits in Germany's defense structures and debunk outdated thinking, Taylor also believes the "stars have rarely, if ever, been better aligned for a major advance."

This, however, will require Germany and France agreeing on what the threat priorities are and how to best combat them. "The bargain needs to bridge France's priority for swift 'hard security' interventions with Germany’s preference for a holistic approach aimed at preventing conflicts, and providing tools for post-conflict stabilization, state-building and reconstruction," Taylor writes. But "if Europe’s two leading founder members can strike a compromise," he concludes, "most other member states will be eager to go along."