Refugees in Serbia - stranded in a warehouse | Europe| News and current affairs from around the continent | DW | 17.01.2017

Refugees in Serbia - stranded in a warehouse

A great number of refugees are living in inhumane conditions in a warehouse in Belgrade. They are waiting to travel to Western Europe. In Serbia, people are arguing about who is responsible for the miserable situation.

Refugees trying to survive the winter near Belgrade

When the bus rolled up, Abbas Khan was unimpressed as he lay on his gray blanket in "Little Peshawar." That is what Khan and his companions call the tiny room they live in on the second floor of an old warehouse behind Belgrade's main train station.

All of the men in the room come from Peshawar in Pakistan, and they are all too old to get on the bus. Currently, the Serbian Refugee Commission is only focused on relocating minors to official camps. Abbas Khan has been in Belgrade for months. He is what one might call a camp veteran.

More than 1,000 grown men and teenagers are stuck here, most from Afghanistan and Pakistan. Several say that they have been unable to find a spot in official asylum camps in Serbia. Others don't even want to go to one because they are scared that they may be taken to the dreaded Preševo camp on the Macedonian border. Many believe that once they get there, they will be deported. Some are waiting for human traffickers rumored to have headquarters in Belgrade.

The city is well situated in that sense. From here, one needs only an hour to travel to the Croatian border by car, and two hours to reach the Hungarian border. Abbas Khan has tried to enter the EU along the route twice, both times in vain. "One time we crossed the Croatian border at night and then walked for 18 hours. When the police caught us they took away our cellphones and our money. Then they hit us like boxers. When I raised my arms to protect my head they hit me even harder," Khan explains. 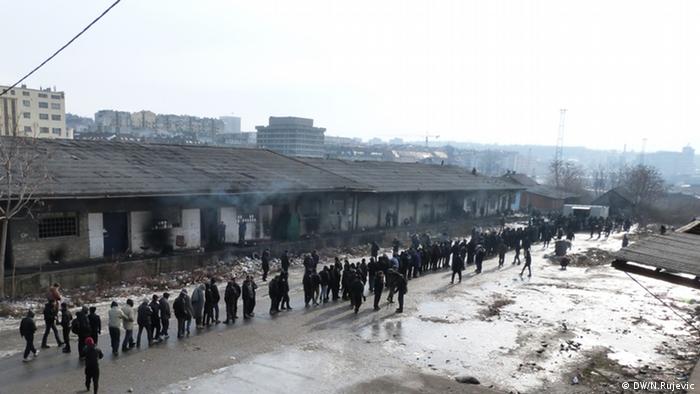 Some 1,000 refugees are living at the Belgrade warehouse

The warehouse, packed with sick people and full of lice, has been a topic of discussion in Serbia for months. But it has only been over the last few days, which have brought much snow and temperatures of 15 below zero (5º F) to Belgrade, that international journalists have begun gathering at the warehouse because it offers such "great pictures." Serbian media outlets speculate that it is that international media presence that has forced the government to send in busses to take some of the refugees to more adequate lodgings.

According to DW information, 48 minors were taken to the asylum center in the Krnjača neighborhood of Belgrade on Monday. Space is in short supply at the center and there is hardly any privacy. For that reason, an old barracks in Obrenovac - some 30 kilometers (18.6 miles) away - is to be renovated soon. Unofficial statements have said that the warehouse behind the train station will be emptied very soon. The state says it cannot be held responsible for the precarious situation in the area around the station. The government claims that there are enough openings around the rest of the country, one just has to want to go.

Only a handful of assistants stayed behind after the government "suggested" that NGOs stop handing out food and clothing in early November. Most aid workers simply left because they didn't want trouble from the authorities. The only international group that has remained is called "Hot Food Idomeni," named for the town on the Greek-Macedonian border that has long been a synonym for the larger refugee crisis.

Rados Djurovic also stayed, he runs an NGO in Belgrade called the "Asylum Protection Center." Above all, he helps with legal issues. "Refugees have heard about illegal deportations and they are scared." And the stories are more than just rumors. There are confirmed media reports about an Iraqi family of seven being dragged off a bus by police in mid-December, only to be taken to the wooded border and sent off to Bulgaria. An investigation into the incident ended inconclusively.

Djurovic says that the Serbian government is once again pretending to be the "good pupil." When the German border was open, Belgrade acted generously. Serbian Prime Minister Aleksandar Vucic even criticized his Hungarian colleague, Prime Minister Viktor Orban, as being "un-European" for building a border fence. Apparently the rules in Europe have changed, and Serbia is adapting to those changes. It is often said that Serbia doesn't want to become a catchall for migrants. 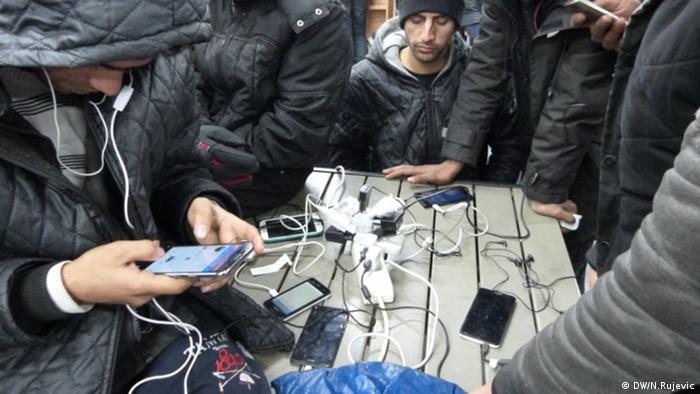 Poor living conditions, bad food, but everybody has a cell phone

Suddenly there is activity in the Belgrade warehouse. Everyone gathers around a man that seems to have something important to say. "I had to cry when I saw this place," says Lukas Siegfried, as he points to the warehouse. "It took me back to the 19th century. These are conditions that we cannot allow to exist in the middle of Europe." Eleven years ago, the man from Basel founded the organization "Elim Open Doors" to facilitate the integration of refugees in Switzerland.

He hands out empty sheets of paper - refugees are told to write down their names and cellphone numbers on them. Lukas Siegfried explains: "A few years ago, Switzerland took in 3,000 Syrian refugees, those people were legally determined to have been in grave danger. But these people here are also in danger, and I want to present these lists to the Swiss government."

An unknown attacker has fired on a group of migrants walking along a Serbian highway, hitting one of them near the Hungarian border. The victim was hospitalized with a stomach wound and is now in stable condition. (03.12.2016)

Refugees trying to survive the winter near Belgrade