Syrian rebel groups have announced they are suspending talks about planned peace negotiations this month in the Kazakh capital, Astana. The rebels have blamed "violations" of the four-day old ceasefire deal. 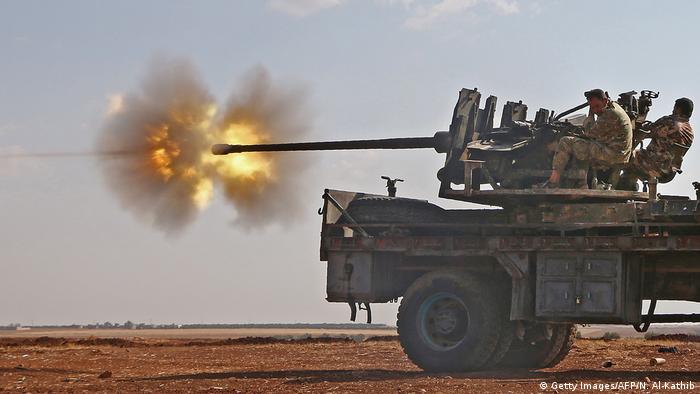 After what rebels have described as "violations" of the current ceasefire, 10 non-jihadi rebel groups said Monday they have refused to participate in further talks about planned peace negotiations with the Syrian government.

"The regime and its allies have continued firing and committed many and large violations," read the statement, which was signed mostly by rebel groups under the so-called Free Syrian Army (FSA) umbrella.

The statement continued by saying the "worst violations" were in an area northwest of Damascus in rebel-held Wadi Barada valley. Syrian government forces and the Lebanese Hezbollah group have been trying to make advances in an ongoing campaign.

The Syrian army and Lebanese Hezbollah made it to the outskirts of Ain al-Fijeh on Monday, which has the primary drinking water source for the area, according to the UK-based Syrian Observatory for Human Rights.

The ceasefire, which was agreed to by Russia and Turkey, which back opposing sides in the conflict, has been in place since midnight Friday.

Rebel groups have denied violating the agreement, which was on shaky ground from the beginning, with Russia supporting Syrian government forces and Turkey backing the rebels. Peace talks were set to take place in the Kazakh capital, Astana, later in January.

More than 300,000 people have been killed in the war in Syria, which has lasted for nearly six years. Over half of Syria's population has been displaced, including millions who have fled abroad becoming refugees.

The UN has approved a Russia-drafted resolution supporting a shaky but functioning ceasefire in Syria. The measure calls for immediate and speedy access for humanitarian workers to the country's hardest-hit areas. (31.12.2016)