Airstrikes in parts of Syria have threatened an unstable truce brokered by Russia and Turkey. Hundreds of people have also fled a mountainous region near Damascus, where government forces were battling insurgent groups. 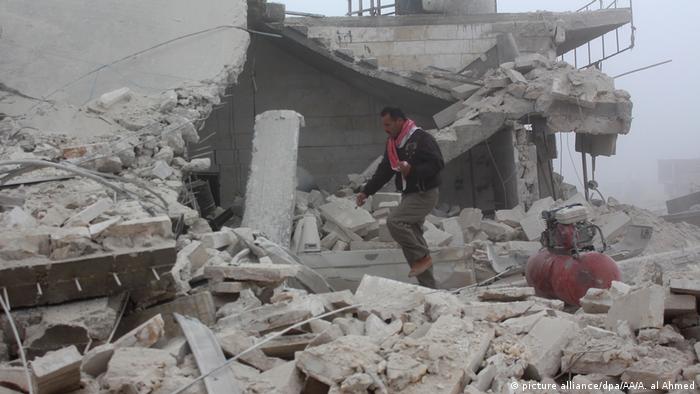 According to the British-based Syrian Observatory for Human Rights, jets bombed the villages of Kafr Kar, Mintar and around the town of Banan in the southern Aleppo countryside.

'Unlikely to lead to the ceasefire collapse'

Outside Damascus, the Observatory also reported exchanges of fire between the regime and rebels in Eastern Ghouta, where President Bashar al-Assad's forces have waged a months-long offensive to retake an opposition bastion.

Despite the unrest, Observatory head Rami Abdel Rahman said the air strikes and fighting were "unlikely to lead to the ceasefire collapsing, but they are violations of the deal."

As a result of the strikes, the Syrian military said some 1,300 people have fled the Barada Valley region since Saturday.

Talks due in Damascus

The nationwide truce, between the Syrian regime and  non-jihadist rebels, aims to ease the path to peace talks in Kazakhstan later this month, orchestrated by Damascus' allies Moscow and Tehran and rebel backer Ankara.

But German Foreign Minister Frank-Walter expressed doubts about a lasting settlement beyond the current ceasefire.

"For there to be prospects for peace, more is needed than the absence of military confrontations," Steinmeiner told the Rheinische Post newspaper Monday.

He said political negotiations among all of the relevant parties would be needed for a definitive end to the fighting.

"The fact that the ceasefire is more or less holding is a hopeful sign for the people of Syria," he added. "Whether it stabilises remains to be seen in the coming days and weeks."

The truce excludes "Islamic State" (IS) militants, however, as well as the formerly al-Qaeda-linked Fatah al-Sham Front.

The United Nations Security Council unanimously backed the Russia and Turkey initiative on Saturday. If it holds, the ceasefire could mark a potential breakthrough in Syria's multifaceted war, which began in 2011 with an uprising against President Assad. Hundreds of thousands people have died in the Syrian conflict, which also made way for the so-called IS terrorist group.