The UN has approved a Russia-drafted resolution supporting a shaky but functioning ceasefire in Syria. The measure calls for immediate and speedy access for humanitarian workers to the country's hardest-hit areas. 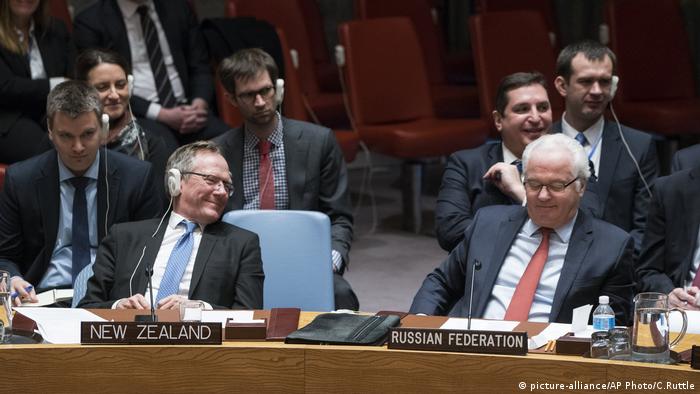 The United Nations Security Council unanimously backed a ceasefire deal for Syria on Saturday, though Western members included language that dropped any direct endorsement of the Russia-Turkey brokered truce. According to reports, the deal was largely holding despite opposition forces accusing government troops of minor violations.

Under the Moscow-penned resolution, a transitional government would be put in place to bring the country out of nearly six years of bitter war. The Syrian conflict has not only caused hundreds of thousands of deaths and untold destruction, but the multi-sided war also led to the creation of the so-called "Islamic State" (IS) terrorist group.

The proposal also demands that humanitarian aid workers are given immediate and safe access to the many civilian populations in desperate need of food, water and medical care.

Moscow and Ankara have also announced plans to host talks between moderate opposition groups and representatives of President Bashar al-Assad in the Kazakh capital of Astana in January. This is to be followed by talks in Geneva held by UN special envoy for Syria, Staffan di Mistura.

According to the Syrian Observatory for Human Rights, small clashes continued to break out between rebel fighters and regime soldiers in the Wadi Barada region near Damascus. A collective of rebel groups warned that the truce will be "null and void" if the violations continue. Although the warplanes that carried out the strikes in Wadi Barada have not been identified, the government has accused rebels in that area of tampering with water pipelines headed to the capital.

The ceasefire excludes extremist groups like IS and the Fatah al-Sham Front, and Turkish airstrikes against their positions continued on Saturday in northern Syria. The Turkish military has also been operating on the ground in Syria since August, and in recent days has launched a push to retake the city of al-Bab from IS.

A nationwide truce was largely holding across Syria, with Russia and Turkey throwing their weight behind the deal aimed to facilitate fresh peace talks. This is the third attempt at a truce in the last 12 months. (30.12.2016)

A ceasefire deal between the Syrian government and rebels has gone into effect at midnight local time. The deal, brokered by Russia and Turkey, is a potential major breakthrough after nearly six years of civil war. (29.12.2016)