In a personal essay, DW's Beina Xu reflects on a coronavirus-related racist attack and confronts Germany's — and Europe's — deeply problematic idea of race. 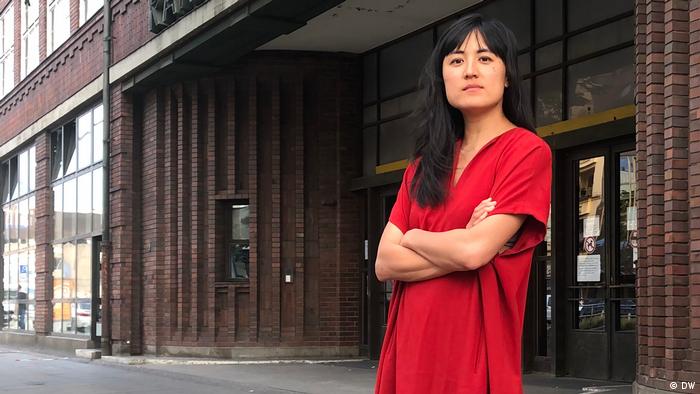 Beina Xu is a video journalist for DW in Berlin

I hadn't seen him coming. The man was short, stocky, roughly my father's age. Suddenly he was standing before me as I sat having a drink on a bench. He pointed at the face mask crumpled in his other fist.

"This is shit," he informed me. I blinked out of confusion.

"Corona comes from China," he clarified. "It's shit, what you brought here."

My first thought was of the image on the cover of German news magazine Der Spiegel, in late January. It was a photo of an Asian person in a red hazmat suit, captioned with an alarming yellow font "Made in China: When Globalization Becomes a Deadly Threat." The colors were a nod to the Chinese flag.

I stared at the man. He seemed like a meek, ordinary retiree. I tried to see what he saw in me—and I could, because I'd ingested those same images my whole life. Looking at my face is to look at centuries of Eastern bodies in the white imagination: the silent, "almond-eyed" masseuse; the replicated worker manufacturing replicas; the sun-dried slave born in a bamboo forest, who built your railroads but will nonetheless steal your social security. There's the buck-toothed cook, and small-footed prostitute.

Read more: The EU has a racism problem too

Faces like mine have freakishly adorned magazines, movies, books, and posters since Marco Polo galloped home in the 13th century. As an Asian woman who spent her life in the West, I can assure you that the pain of understanding yourself through the gaze of whites is double-edged: it kills you, then shows you how to survive.

But the title of pandemic creator was a first. Racism is dynamic; it morphs to fit political expediency. And it is exposing a harrowing crack in the European project. Amidst the global reckoning about race ignited by the death of George Floyd, I want to make one thing clear: that Western Europe touts a vile relativism when it comes to facing its own racism. It points its finger at the US as if to say, we're not as bad as that.

I'd like to remind them, in my red hazmat suit, of just one detail: that the adolescent nation internally combusting from racial pain was the brainchild of European colonialism. That is to say: it is, and always was, a project founded on the vision of white supremacy.

A matter of bad manners

Let's address the curiosity before it gets in the way: I am Chinese. I grew up in the US, studied in Europe, and have been living in Berlin for six years. It goes without saying that the racism I endure in the West is persistent, quotidian, and mind-numbingly unoriginal. But because I am not getting knifed by Nazis, most Germans diminish my experiences to a matter of bad manners by bad people.

"He's just a racist nut," a German friend said of the vitriolic pensioner (as if that were ever a source of comfort.) "Most people aren't like that."

Read more: Racism on the rise in Germany, study reveals

When she said "most people," I didn't know if she included her own sister, who imitated the Chinese language in front of me at the dinner table. (A resounding performance akin to, as the old joke goes, throwing a fork down the stairs.) Or my former water polo coach, who referred to the slits in a kickboard as my eyes. Or the French boutique owner who approached me at a bar to continue the apparently Olympic pastime of verifying "what kind of Asian" I was — just so she could win a bet with her friend.

And lest we forget those self-congratulating liberals who actually work in the name of human rights and journalistic diversity—whose insistence on their non-racism is so dogged and shameless that on my first day at work, they invited me to an editorial conference during which I realized I was the only person of color at a table of twenty.

I certainly don't consider any of the above people nuts. They just seem to equate poor manners with systemic oppression and othering rooted in the racial hierarchy their ancestors created at the beginning of their conquest of Earth. And this is something Germans seem to know little about: not a single German I've met knew that a part of China was once one of the Germans' many colonial projects—Qingdao, my grandparents' ancestral home, where the Kaiser blew through with his Navy and set up shop to brew his beloved pilsner, still widely exported today.

And thus I find it distasteful to have to remind Germans, in their own country, about what German-American philosopher Hannah Arendt meant when she wrote about the banality of evil. It is not murderous, diabolic scheming — but rather the "inability to think, namely, to think from the standpoint of somebody else," that leads us to unfathomable chambers.

I got ahead of myself when I said I wasn't getting knifed by Nazis. A few months ago, a woman of East Asian descent living in the Netherlands woke up to a swastika scratched into the hallway outside her flat. In Munich, a German woman from China was assaulted by a neighbor, who sprayed her with disinfectant, screamed "corona," and threatened to cut off her head.

The morning after my incident, my Vietnamese neighbor posted a notice on our building door that for over a month, someone had been stuffing trash and used tissues in his mailbox. "I don't know what your mailboxes look like," he wrote, "but mine looks like corona racism." Getting harassed on the street is close, but at home is closer.

To live in a place is to continue its history. What I felt in this moment was a cold-sweat reckoning of Germany's past. There is a particular kind of horror one feels thinking about the path fear has taken on the very ground you stand on. There is yet another when you realize what that implies for your own condition: that you are living in unprecedented times, when the stability of the world order is teetering—and you're the one they're blaming.

To put it explicitly: never before have I felt so afraid.

I chose to pen this piece as an act of resistance—because I have the privilege to articulate my voice to an audience, and because we should never forget what kind of power it is to disseminate words on a mass scale. But I am also desperate about the limits of language, as I am desperate about many things today. This moment is a hostile, desolate one. It is so painful to write. If you take anything with you at the end of this piece, dear reader, let it be the call to think.

A letter signed by all 54 African nations requested the UN Human Rights Council to urgently debate racism and police violence as protests over George Floyd's death grow around the world.  (13.06.2020)

After being criticized for their first statement regarding the controversial ad, VW has issued a second apology. The commercial contained references to colonialism and appeared to show a racial slur. (20.05.2020)

Blast at Kabul educational institute kills over a dozen 0m ago

Brazil: Bolsonaro, da Silva jab at each other in presidential debate 2m ago

US: Biden fears 'substantial loss of life' in Hurricane Ian 4h ago