Raccoons wreak havoc with agriculture and native species in Japan | Asia| An in-depth look at news from across the continent | DW | 25.09.2018

Raccoons wreak havoc with agriculture and native species in Japan

Originally brought to Japan as pets, raccoons are being released into the wild when they become too big. Now it has become too difficult for Japanese authorities to control them. Julian Ryall reports from Tokyo. 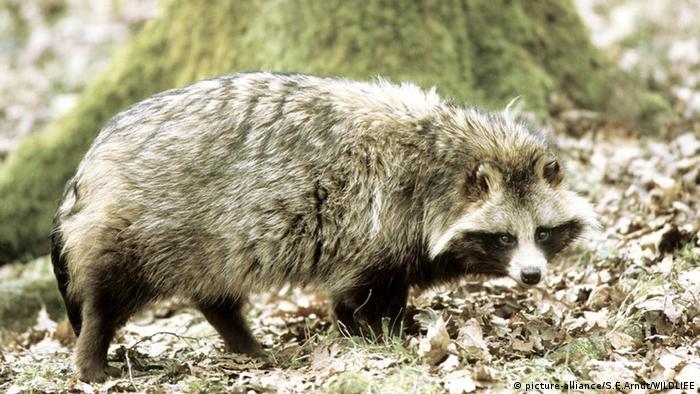 They are large and frequently aggressive. They can decimate farmers' crops and suburban gardens. They are being blamed for damage to infrastructure and the wooden homes that are still common across rural Japan.

Raccoons may look cute and cuddly, but they are rapidly becoming a menace across the country.

And they are just one of 148 species that are on the Environment Ministry's list of invasive alien creatures that are causing similar havoc with local flora and fauna.

"Our research shows that raccoons have expanded their habitats threefold in the last decade," Haruka Yamaguchi of the ministry's Task Force for Countermeasures Against Invasive Species, told DW.

The statistics suggest that raccoons are now found in 44 of the nation's 47 prefectures, and are particularly unwelcome in crop-growing regions.

"We are providing funds to prefectures so they can produce booklets and other literature to educate people about stopping raccoons spreading into more areas, while the farm ministry is providing funds for electric fences and other deterrents," Yamaguchi said.

"It is a constant battle," she added.

The other problem is that foreign species that lack natural predators in Japan are encroaching on the habitats of local creatures and taking over their ecosystems, in extreme cases putting them at risk of extinction.

One of the most at risk are the insects that are indigenous to Chichijima Island, a tiny speck of land about 1,000 kilometers south of Tokyo, which has become a new home to the green anole lizard, a rapacious, fast-breeding invader.

Some of the insects on Chichijima are not found anywhere else in the world, and there has been a knock-on effect among other inhabitants of the local ecosystem.

Most worryingly, the lizards appear to have found a way to traverse the channels that separate Chichijima from the rest of the Ogasawara archipelago, which was recognized as a UNESCO Natural World Heritage site in 2011. In 2013, the first lizards were found on Anijima Island, which is 500 meters away across a channel.

Experts believe the first lizards were brought to Chichijima by US military personnel when they were stationed on the island in the 1960s, while they may be spreading through the archipelago in tourists' backpacks on the small ferries that crisscross the local waters.

The Celastrina ogasawaraensis, a butterfly designated as a nationally protected species, and the indigenous Ogasawara dragonfly have both been driven to the brink of extinction on Chichijima by the lizards. The plight of local insect life has also been felt by a number of unique species of birds and bats.

The Environment Ministry has placed 36,000 traps in the southern part of Anijima, while a fence is also being erected in an effort to halt the lizards' occupation of the island.

Other foreign creatures have taken up residence in different parts of Japan, with colonies of red back spiders, native to Australia, found in Kawasaki, Okinawa and Osaka, while infestations of venomous fire ants have been discovered in shipping containers imported from China and Southeast Asia. Despite the authorities' best efforts to screen arriving freight and destroy any unwanted arrivals, fire ant queens have been found in areas around Japanese port cities.

Large-mouth bass, which were imported to stock lakes for sport fishermen in the 1920s, have escaped and decimated local populations of freshwater fish, while American bullfrogs and Mississippi crayfish have also escaped captivity to multiply rapidly.

"Right now, the biggest problems seem to be the raccoons and the civet cats, which were brought here in the late 19th century to produce fur," Kevin Short, a professor specializing in environmental education at the Tokyo University of Information Sciences, told DW.

"We get plenty of raccoons here in Chiba Prefecture, where I live, but they only became popular in the 1970s because of an animated television show about a raccoon called Rascal," he said. "People started keeping them as pets, and the pet importers could not get enough of them."

"The problem is that while baby raccoons are cute and friendly, they are big, heavy and aggressive when they become adults. And it becomes impossible to keep them in the average Japanese apartment, which is small and not designed to be a home to that sort of pet," he said.

"So owners had a choice; they could take them to the city to be euthanized – it was not a choice for most people because they had formed an emotional attachment to their pets," he added.

"So they did what they thought was the best thing and they released them into the wild. And now we're seeing the results of that."

And given that many of these imported species are adaptive by nature, Short believes that they will continue to multiply in Japan's countryside and that little can be done to stop that from happening.