After its kitten craze, owl cafés seem to be Japan's next big thing. Customers have been lining up to spend time with the big-eyed birds. But despite good intentions, experts say signs of stress are likely to be misread. 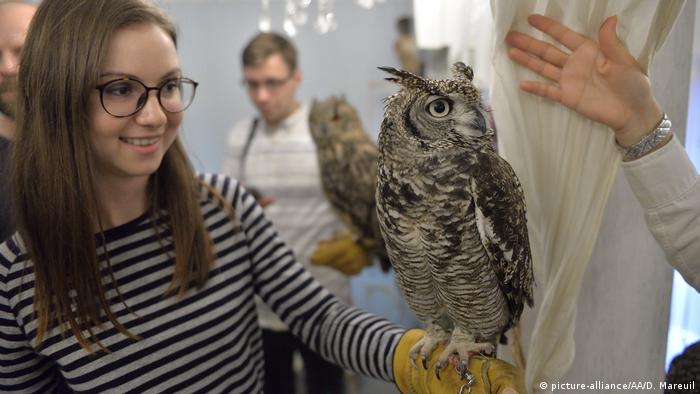 Sweet Potato, Cherry Tomato and Kuppi are only three of over 30 owls that are listed on Akiba Fukurou's website, an owl café at the heart of Tokyo.

They're pretty cute - and that's probably the main draw for visitors dropping in for an hour to hold the owls and take pictures.

In reviews, customers rave about the experience of getting up close and personal with owls of all shapes and sizes.

But keeping different types of owls in close proximity can be problematic, says Christian Artuso, a biologist and owl expert with Bird Studies Canada.

"You see a bunch of problems in the owl cafés with overcrowding - but you also see placements of larger owls and small owls together. That is extremely stressful for the small owls," he told DW.

"They are usually not going to be happy to sit beside a predator that would eat them under a natural context." 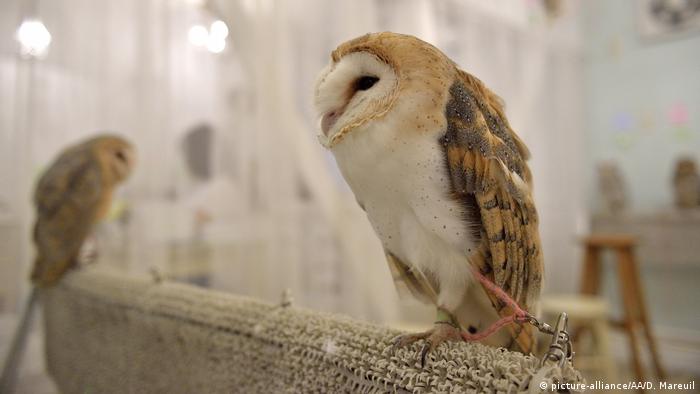 Owls also should not be touched, he added, as petting and stroking by unfamiliar people is extremely stressful for the animals.

Simulating natural behavior like preening might be the only situation where owls would not get stressed by human touch, he added. But that would only be the case if the owl is very familiar with the person.

Oil from hands can also damage the owl's plumage, causing bald spots that can take up to half a year to grow back.

"It does depend a little on the individual temperament of the animal - but certainly even owls born in captivity would be subject to these types of stresses," Artuso explained.

That view is echoed by ornithologist Rod Angus, who runs the Scottish Owl Centre.

"Owls don't like being stroked. Even with quite tame birds this can and does cause undue stress," he told DW in writing. "Also, if stroking is allowed among a crowd of people, everyone will want to do it - which would definitely be very stressful even for 'tame' owls."

According to reviews by customers, they were able to hold and pet owls at Akiba Fukurou. 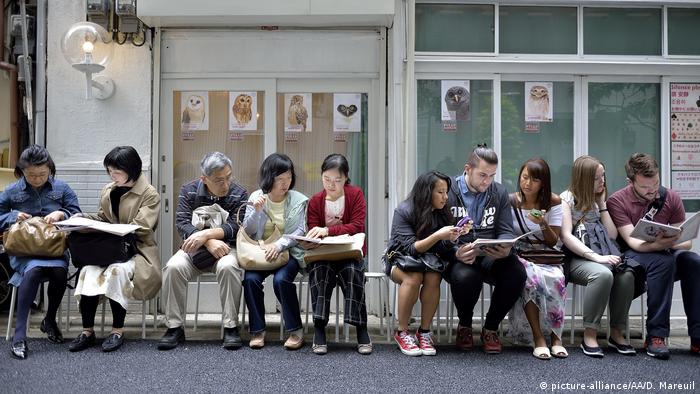 Lines are long in front of Akiba Fukurou to see the owls - it attracts Japanese and foreign visitors alike, the owner said

"Actually, touching is hardly allowed," the owner of Akiba Fukurou - who asked for his name not to be published - told DW in an email. It is possible for customers to hold owls on their arms, he added, saying Akiba's goal was to "connect the hearts of owls and people."

The owner also stressed he only keeps owls raised in captivity. "Wild and captive-bred owls are very different," he said. Only a small group of people is allowed to see the owls at the same time, although Akiba Fukurou's owner did not specify how many.

He said he looks after the owls together with his wife and brother, and considers the owls to be part of the family.

"I love owls," he said, adding that he does not want to cause them any stress. He said he carefully groups them together based on whether they seem to get along.

The owner also acknowledged other owl cafés in Japan might have different standards when it comes to the treatment of owls - but that his aim was to keep both owls and customers happy. 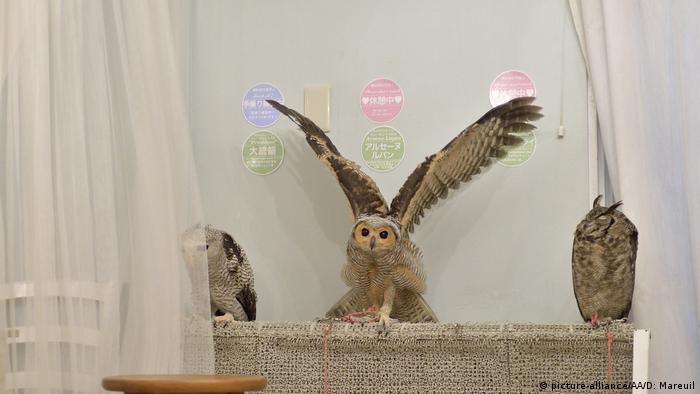 Akiba Fukurou has more than 30 owls listed on its website

"The popularity of 'owl cafes' can lead to all sorts of abuse," Angus said. "We feel that becoming overly 'touchy-touchy' with owls, especially with the untrained general public, is extremely unwise."

That view was echoed by Artuso, who has watched video footage from owl cafés that made him cringe.

"The owls are panting and they are making these high-pitched noises, they are in all sorts of defensive postures and their pupils are rapidly contracting and dilating," he recalled from one recording.

This shows the animals are stressed, he said. "There are all sorts of signs if you know what to look for."

He said keeping owls happy in a café-type context would be very difficult. "You'd have to have very few animals, maybe just one or two - and you'd have to keep them separated most likely, or at least the different species separated." 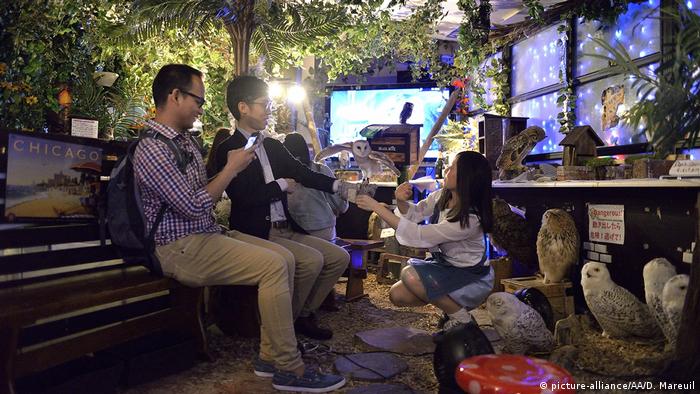 Are these owls stressed? It might be hard for visitors to tell - a 'frozen' owl could be seen as being 'curious' about people

In some cafés, you can even buy an owl to take home with you.

"Owls are not pets," Angus stressed. That's probably the most striking difference between kittens in cat cafés, which have popped up all over the world, and ... well, owls in owl cafes.

Artuso said that despite being on the fence about whether or not cat cafés are indeed a good idea, "there would be less of these animal welfare concerns having a domestic animal in that context."

Most cats also do enjoy being pet - and if they don't, "people might be better at reading those signals with cats than they are with owls," Artuso concluded.

In the US, "Finding Dory" has already become one of the most successful animated films ever. Such movies can fuel demand for home saltwater aquariums. Conservationists say that is not a good thing. (30.09.2016)

In India, owls are sacrificed in rituals intended to bring good fortune - and in some cases, to send bad luck to rivals. Although owls are protected by law, the black market is flourishing - as two reporters found out. (27.09.2016)

Do you think piranhas are bloodthirsty monsters, who skeletonize any creature they can eat within seconds? Then you will be surprised! DW's Brigitte Osterath has come to know seven piranhas quite intimately. (23.05.2016)

Owl for an owl