President Vladimir Putin has slammed the West as Russia is hit by sanctions. He called on emerging economies to cooperate with Russia as the Kremlin seeks to reroute trade. 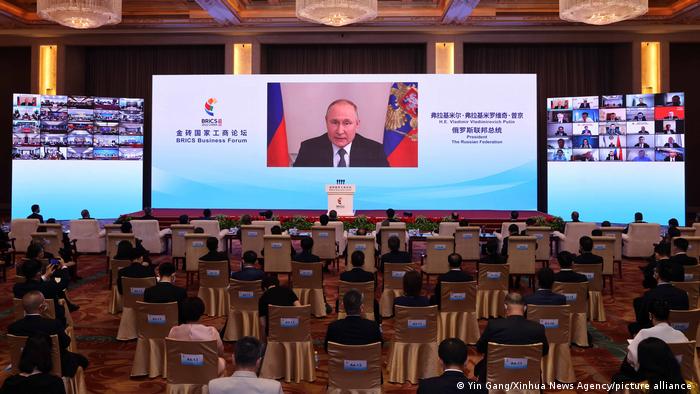 The Russian leader on Thursday called on the leaders of the BRICS nations — Brazil, India, China and South Africa — to cooperate in the face of "selfish actions" from the West.

The meeting takes place as Russian presses on with its war in eastern Ukraine. China, India, South Africa and Brazil have all avoided openly criticizing Russia over its February 24 invasion.

The Russian president hit out at the  West, accusing it of causing a global crisis.

"Only on the basis of honest and mutually beneficial cooperation can we look for ways out of the crisis situation that has developed in the global economy due to the ill-considered and selfish actions of individual states," Putin said.

In light of sanctions, Putin said Western states were "using financial mechanisms" to "shunt their own mistakes in macroeconomic policy on to the whole world."

"We are convinced that now, more than ever, the leadership of BRICS countries is needed to develop a unifying, positive course towards the formation of a truly multipolar system of intergovernment relations," Putin said.

No grain, no gas: Is scarcity Putin’s weapon of choice?

Putin had said on Wednesday that Russia was in the process of redirecting its trade and oil exports to BRICS countries as a result of sanctions.

China's Xi condemns use of sanctions

Chinese President Xi Jinping on Thursday said China, which is chairing this year's summit, stood opposed to any abuse of international sanctions. He called on other BRICS members to rise to their responsibilities in the world.

"We must abandon Cold War mentality and block confrontation and oppose unilateral sanctions — and the abuse of sanctions," Xi said. "The global economic recovery remains a tortuous process while peace and security become more salient problems."

China has the largest economy in the BRICS grouping by far. It accounts for more than 70% of the group's overall $27.5 trillion economic might.

Are there any red lines for China in Russia's war on Ukraine?

What is the BRICS group?

BRICS is the acronym used for five of the world's major emerging economies which also wield significant power in regional affairs.

The terminology was BRIC (or the BRICs) before South Africa, which was not an original member, joined in 2010. The name is believed to have originated from a 2001 Goldmann Sachs asset management report.

The governments of the BRICS states have met annually at formal summits since 2009, with last year's chaired virtually by India.

Three members — China, India and South Africa — have abstained from voting on a UN resolution condemning Russia's invasion of Ukraine. Brazil did vote in favor of the motion, but Brazilian President Jair Bolsonaro has declined to condemn the invasion. He has said Brazil will not take sides.

China and India have also significantly increased the amount of Russian oil they buy.

BRICS together represent some 42% of the global population, 23% of GDP, 27% of the territory and 18% of trade. Combined, they are bigger than the eurozone and, unless China slows dramatically, the collective size of the BRICS countries will soon be as big as the United States.