Washington and Beijing's tit-for-tat crackdown on foreign media could make work harder for US journalists in China. Experts say the principle of press freedom is being caught up in a geopolitical dispute. 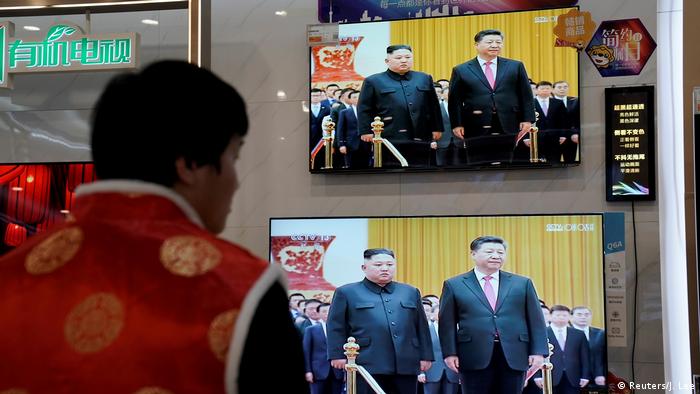 On Monday, the US State Department announced that the US would cap the number of Chinese nationals allowed to work for five state-controlled Chinese media outlets in the US.

This comes after three reporters from the Wall Street Journal (WSJ) were abruptly expelled by the Chinese government over the headline of an opinion piece on February 19.

At a press briefing last month, Chinese Foreign Ministry spokesperson Geng Shuang said the headline, which referred to China's handling of the coronavirus outbreak, was discriminatory.

Keith Richburg, director of the University of Hong Kong's Journalism and Media Studies Center and a former Beijing bureau chief for the Washington Post, said taking action against Chinese media was something new for the US.

"Previous administrations always said they didn't want to go down the tit-for-tat path," Richburg told DW, adding that the US has wanted to demonstrate that it believes in press freedom while avoiding falling into a pattern of retribution.

However, under President Donald Trump, the US has taken a more transactional approach towards foreign policy.

Richburg said it wasn't surprising that the Trump administration reacted to the move against the WSJ journalists in China by restricting the number of Chinese journalists allowed to work in the US.

"On the one hand, China does treat foreign journalists unfairly," said Richburg. "But on the other hand, I think that the value of a free press is something we should not tamper with."

However, the US has said it will not immediately deport the Chinese journalists and they will not be barred from seeking employment elsewhere in the country. Chinese nationals working for other media outlets in the US won't be affected by the new rule, and the five outlets in question won't be prohibited from hiring employees from other countries.

"Based on the Cold War mentality and ideological prejudice, the US State Department suppressed the Chinese media agencies with political means in the United States for unexplained reasons," said Chinese Foreign Ministry Spokesperson Zhao Lijian.

US Secretary of State Mike Pompeo emphasized that Beijing has imposed harsh surveillance, harassment and intimidation tactics against journalists from the US and other countries working in China.

"We urge the Chinese government to respect freedom of expression, including for members of the press," Pompeo said in a statement.

Chiaoning Su, an assistant professor of journalism at Oakland University in the US, said that the US crackdown on Chinese media is a response to the rise of Chinese propaganda around the world.

"I think the whole series of events reflects Washington's attitude towards the rise of China's sharp power," Su told DW.

China is known by free press advocates to be one of the most restrictive places for foreign journalists to report from. Su said Washington's move could make working conditions for US journalists in China even worse.

"China produces propaganda in the name of press freedom and that's when the US tries to restrict these activities," said Su, adding the China will be driven to respond to this by further restricting the work of foreign journalists.

"Ultimately, press freedom is the thing that pays the heaviest price."

Richburg said the US and China should find a way to calm things down, rather than embracing a combative approach.

"I think the US and China need to get back to the point where both sides can have different systems, while at the same time recognizing that sometimes they will criticize each other," Richburg said.