Pope faces tightrope act in Myanmar amid Rohingya crisis | Asia| An in-depth look at news from across the continent | DW | 27.11.2017

Pope Francis has arrived in Myanmar as the country grapples with the Rohingya crisis. While some stress the pontiff should refrain from using the contentious term "Rohingya," others disagree vehemently. 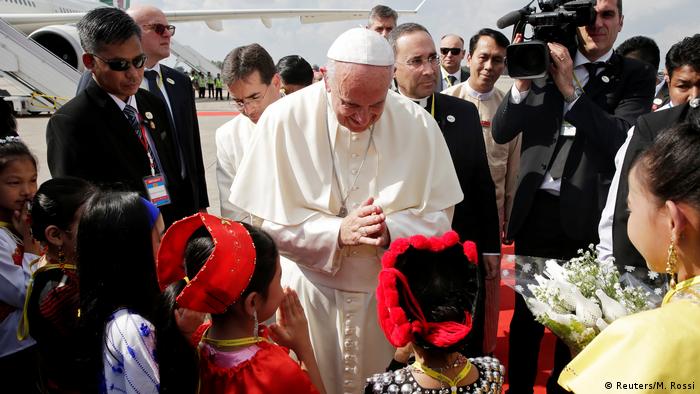 Pope Francis' trip to Myanmar and Bangladesh on Monday comes as the region confronts turbulent times, not least because of the festering Rohingya crisis. The violence and consequent displacement facing Rohingya Muslims based in Myanmar's western state of Rakhine have come under close scrutiny worldwide.

In August this year, violence flared up once again after the Arakan Rohingya Salvation Army (ARSA) raided several police posts and killed 12 people, according to government figures. The ARSA claims it is acting to secure the rights of the Rohingya.

The response from  Myanmar's military was swift and brutal. Since it launched its counterattack, some 600,000 Rohingya have fled to neighboring Bangladesh so far. The UN and human rights groups like Amnesty International speak of ethnic cleansing, accusing soldiers of committing "crimes against humanity," including murder, rape and burning down entire villages. The military, though, forcefully denies allegations that it has committed atrocities against the Rohingya.

Pope Francis, who has established himself as a strong human rights advocate, has repeatedly called for solidarity with the people regarded as one of the most persecuted communities in the world. In August, the Pope appealed for an end to violence against the Rohingya and urged "full rights" to be given to the community. "My full closeness to our persecuted Rohingya brothers and sisters," he said.

Prior to the papal visit, Yangon's Archbishop Charles Bo met the pope in Rome and reportedly recommended that the head of the worldwide Catholic Church refrain from using the controversial term "Rohingya" in Myanmar. Instead, it's suggested that the pope use "Rakhine State Muslims," to avoid controversy. Much of Myanmar's Buddhist-majority population reject the term "Rohingya" and refuse to recognize them as a separate ethnic group or as Myanmar citizens.

Even former UN Secretary-General Kofi Annan, a Nobel Peace Prize winner and author of an advisory commission report on Rakhine State, indicated that the pope should not use the term "Rohingya."

Human rights groups, however, call on the pope to raise the issue during his trip.

"The Rohingya have little left besides their group name after years of statelessness, discriminatory restrictions on movement and access to life-sustaining services, and being targeted by a military subjecting them to ethnic cleansing and atrocities," Phil Robertson, deputy director for Human Rights Watch in Asia, told Reuters news agency. "The Pope absolutely should stand up for the Rohingya by using the name Rohingya," he said.

- Watching the Rohingya crisis through WhatsApp

It's unclear whether or not Francis will heed the advice and use a term like "Muslims in Rakhine State." The Vatican does not make comments on papal speeches ahead of trips.

Yangon's Cardinal Charles Maung Bo was quoted by Radio Vatican as saying that the papal visit would focus mainly on the peaceful coexistence of different religious communities.

For years, the social situation in the country has been uneasy. The cardinal stresses that the pope could help end the spiral of violence. In this regard, Cardinal Bo advised Francis to meet with Myanmar's army chief, Senior General Min Aung Hlaing, during his trip. As supreme commander of the armed forces, the general has tremendous power and significant impact on the nation's politics. "For sixty years," he said, "the Church has had no dialogue with the Army, while now a relationship has started, and we hope that the dialogue will improve."

Last but not least, he recommended that Pope Francis meet with influential Burmese working for interreligious dialogue and harmony.

The motto of the visit is "peace and love." The symbol for the journey, designed by the Catholic Church, shows the pope with a dove of peace, next to an outline of Myanmar in the colors of the rainbow, which is expected to represent ethnic and religious diversity. The whole thing is surrounded by the flags of the Vatican and Myanmar in a heart shape.

Catholics are one of the smallest religious communities in Myanmar, accounting for only 660,000 (1.2 percent) of the country's population of 53 million.

So far, it is known that the pope will meet President Htin Kyaw and State Councilor Aung San Suu Kyi. After an interfaith-ecumenical peace meeting, among other events with Buddhist monks, a public mass is planned for November 29, following which Francis is scheduled to travel to Bangladesh.

Bangladesh has witnessed repeated incidents of violence against Catholics in recent years.

In 2001, radical Muslims detonated a bomb at a Mass, killing nine people. There were numerous violent attacks between 2014 and 2016, in which Catholics' houses were set on fire and priests were assaulted.

"The current situation faced by Catholics in Bangladesh is difficult but stable," said Rana Dasgupta, a lawyer who heads an organization representing minority religious communities in Bangladesh. "But I am afraid that the situation will worsen four or five months before elections," he told DW.

Bangladesh is set to hold a general election at the end of next year. In the run-up to elections in recent years, there has always been an increase in violence against minorities.

Dasgupta hopes that the pope's visit will increase understanding and compassion among various religious communities, especially as violent extremists seem to be gaining strength in society.

The Catholic community in Bangladesh is even smaller than the one in Myanmar, accounting for a mere 375,000 (about 0.2 percent) out of a population of 165 million.

In the South Asian country, the pope is scheduled to visit national memorials honoring the martyrs of Bangladesh's liberation war in 1971. He will also hold meetings with President Abdul Hamid and Prime Minister Sheikh Hasina. Towards the end of the trip, a meeting with clerics is planned as well as a trip to a Mother Teresa nuns' orphanage in the capital, Dhaka.