Rights advocate Amnesty International accuses the Myanmar government of imposing an apartheid regime. Since violence broke out in August, over 600,000 Rohingya have so far fled the country's western Rakhine state. 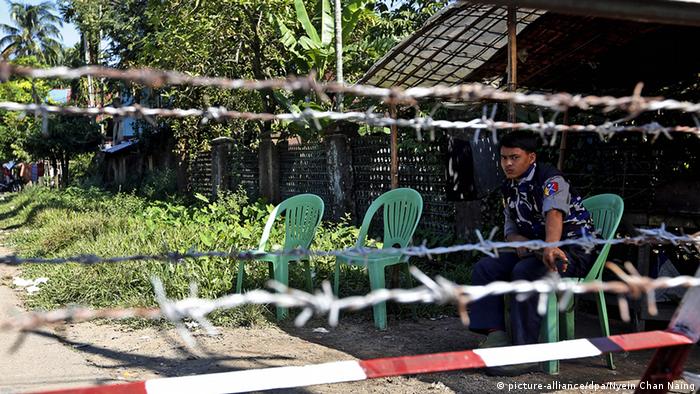 Myanmar's political transition in recent years has been accompanied by ethnic and religious violence, targeting particularly the Rohingya Muslims based in the western state of Rakhine. As early as in 2012, almost 100 people lost their lives in riots in the region, about 5,000 houses were destroyed and around 75,000 people were displaced.

In August this year, violence flared up once again after the Arakan Rohingya Salvation Army (ARSA) raided several police posts and killed 12 people, according to government figures. The ARSA claims it is acting to secure the rights of the Rohingya.

The response from the Myanmar military was swift and brutal. Since it launched its counterattack, some 600,000 Rohingya have so far fled to neighboring Bangladesh. The UN speaks of ethnic cleansing. The military, though, forcefully denies allegations that it has committed atrocities against the Rohingya.

Against this backdrop, human rights group Amnesty International has released a detailed report, titled "Caged Without a Roof," in a bid to shed light on the humanitarian crisis.

The research for the report, Amnesty said, was carried out between November 2015 and September 2017, and included four field trips to Rakhine State, over 200 interviews, extensive review of legislation, academic and other literature, as well as review of photographs, videos and other documentation.

The report focused on developments in the region since 2012, but doesn't provide a systematic historical evaluation of the conflict.

Amnesty's report follows the trend set by similar reports published by rights groups such as Human Rights Watch and Fortify Rights. The document held Myanmar's security forces responsible for murder, torture, rape and the burning of entire villages since August 2017. Amnesty emphasizes that these are crimes against humanity.

Like in other reports, most of the input that went into Amnesty's was based on eyewitness accounts of refugees, as the Myanmar government does not give overseas observers access to the crisis-plagued region.

Amnesty's criticism that the Myanmar government has set up an "apartheid regime" in the country is eye-catching. The organization's conclusion is that, at least since the violence in 2012, Myanmar officials have committed the crime against humanity against the Rohingya.

The charge has been leveled before, for instance, in an article published by the New York Times in May 2014.

In the report, Amnesty substantiated the charge in detail. After the 2012 riots, it said, Myanmar security forces separated the Buddhist and Muslim populations, housing tens of thousands of Muslims in refugee camps.

"Since then […], almost every aspect of their lives has been severely restricted, and for five years their human rights – including to freedom of movement, to a nationality, to adequate healthcare, education, work and food – have been routinely violated," Amnesty said.

The rights group said that research had shown institutionalized segregation and discrimination against the Muslims. "In the case of the Rohingya, this is so severe and extensive that it amounts to a widespread and systemic attack on a civilian population, which is clearly linked to their ethnic (or racial) identity, and therefore legally constitutes apartheid, a crime against humanity under international law."

Furthermore, it added: "As described in this report, this regime has been created and maintained through written laws, regulations and local orders, as well as through policies and practices that may not have been written down but have been consistently enforced by state officials."

The goal of the government and the military was always to dominate the Rohingya, the authors of the report said. And to raise the charge of apartheid, it is essential to demonstrate that Myanmar authorities have knowingly pursued their persecution and segregation.

Although Myanmar has not signed any of these conventions, they are an integral part of customary international law and therefore applicable to the Myanmar case.

In the closing section, Amnesty calls for the implementation of the proposals drawn up by former UN Secretary General Kofi Annan to resolve the crisis in Rakhine. "Reintegration, not segregation is the best path to long-term stability and development in Rakhine State."

Germany's foreign minister has said he believes Myanmar will make a deal to repatriate 600,000 Rohingya refugees who fled Rakhine state. Many in Myanmar see Rohingya as illegal immigrants responsible for terrorism. (20.11.2017)