Watching the Rohingya crisis through WhatsApp | Asia | An in-depth look at news from across the continent | DW | 24.10.2017

Watching the Rohingya crisis through WhatsApp

The plight of Rohingya refugees fleeing Myanmar in the past two months has been well documented. But how do these refugees stay in touch? Ashish Malhotra reports from a Rohingya settlement in India. 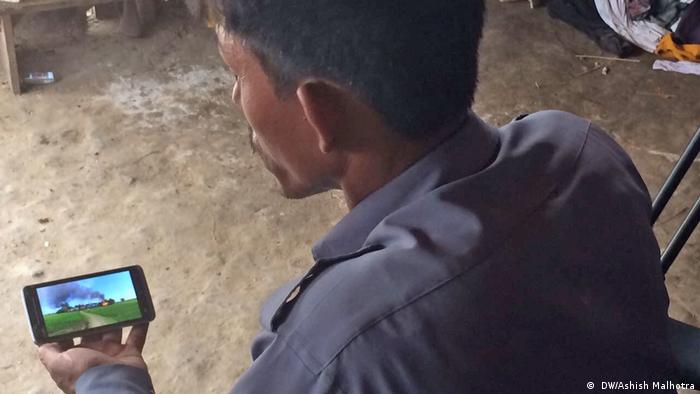 The past few months have brought little but bad news to Hafiz Ahmad. A Rohingya refugee who's been living in India's capital New Delhi since 2014, Ahmad has watched from afar since late August as more than half a million of his people have fled Myanmar in the face of a crackdown from the country's military.

The wave of violence has come after attacks on the military from Rohingya militants in the western state of Rakhine. The international community has largely seen the response as disproportionate. Leading human rights groups have accused the Myanmar military of committing crimes against humanity against the Rohingya, and say they have partially or completely destroyed at least 288 of their villages during the campaign. 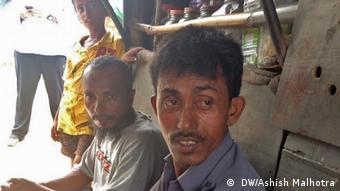 Ahmad and others do not use the messaging app on a simple one-to-one basis, but rather in a collective fashion

For Ahmad, the plight of his people can sometimes be overwhelming. The settlement where he and around 70 Rohingya families live on New Delhi's eastern flank has one television. But at one point in recent weeks Ahmad said he could no longer bear to turn it on because of the depressing news it delivered from back home.

"I feel very bad, not only for my family but for all Rohingya," he told DW.

"Our [Myanmar] government wants to cleanse our community as a whole from northern Rakhine and replace us with Rakhine community settlements," he added.

Watching tragedy unfold in the palm of their hands

But even if Ahmad is not always watching TV, there's one way in which he and many other Rohingya have stayed in touch with the latest developments back home: the WhatsApp messaging service.

For the most part, Ahmad and others do not use the messaging app on a simple one-to-one basis, but rather in a collective fashion, allowing them to keep a segment of an increasingly disparate community connected. Ahmad is currently a member of several community WhatsApp groups, most consisting of around 150 Rohingya residing in Myanmar, Bangladesh, India, Malaysia, Pakistan and Saudi Arabia.

Through these groups, members exchange countless amounts of multimedia messages, allowing the human tragedy taking place among their people to unfold before their eyes, and in the palms of their hands. Though Ahmad is illiterate, a large number of the messages are photos and videos, often attached to chain messages forwarded along by community members. These images resonate deeply with Ahmad, who looks through them every night before he goes to sleep.

"During the day, I don't look at [the WhatsApp messages] much. I'm busy. I go out around four or five in the evening and come back at 10 or 11 at night. I spend one or two hours looking at them."

Many of the messages lead group members away from WhatsApp to sites like Facebook and YouTube. The pictures and videos vary in nature – from formal news bulletins by the Malaysia-based news channel Rohingya Vision to montages of destitute villagers fleeing their homes. But much of the content is far more graphic and shocking.

"Oh brothers and sisters, please look at these pieces of human body…." says the narrator of one video which shows what appear to be human remains lying abandoned on a beach.

"Many come to this beach to cross the border to flee into Bangladesh. Those who couldn't manage to cross were killed by a mob that left the dead bodies to be eaten by dogs and foxes," continues the narration.

Ahmad points out another message that's similar – an image of dogs seemingly pecking at an unidentifiable carcass. Emblazoned on the picture is just one simple word: "Rohingya."

Other videos show villages being burned as well as mutilated and brutalized bodies, including those of children. Ahmad is left with an impression of what's going on back home.

- US considers sanctions against Myanmar over Rohingya abuses

In the era of "fake news," it would be fair to question whether all the images Ahmad is exposed to are authentic.

Another refugee at the New Delhi settlement says he does question them, and prefers to watch the news because he doesn't believe everything shared on the WhatsApp groups.

DW approached Pankaj Jain of Social Media Hoax Slayer, a fact checker of viral content in India, to check the authenticity of some of the messages Ahmad receives. In the case of the photo of dogs allegedly eating the bodies of dead Rohingya refugees, Jain traced the image back to a YouTube video supposedly posted from the Indian city of Varanasi last month. Rohingya were not mentioned in the post.

But Ahmad doesn't spend much time worrying about the veracity of the images he sees online. Almost immediately after being asked about the possibility of fake messages on the groups, he begins detailing the ordeal his brother went through last month when his home in Myanmar was attacked.

Though response seems unrelated to the question at first, with time it's easier to see its relevance. For Ahmad and many others like him, almost anything has become plausible because of the personal horrors they've endured.

"They put bombs in the middle [of our family homes]…three bombs. Before they put the bomb, my brother left his house," he recounts. Ahmad’s brother eventually fled to Bangladesh.

The power of WhatsApp

A recent Reuters report noted the way in which the Arakan Rohingya Salvation Army (ARSA) – the militant group that took responsibility for August attacks – also uses WhatsApp. According to the report, ARSA's leaders communicate via WhatsApp groups. They also use WhatsApp groups to generate wider levels of support.

DW did not see any indication that content shared on the groups Ahmad is a part of originated from ARSA, which Myanmar considers a terrorist organization.

But even if ARSA material does circulate on Ahmad’s groups, there are a few reasons why it would be unlikely to lead him to suddenly take up arms. Though the WhatsApp groups have played an important role in Ahmad's life in recent months, his participation in them is extremely casual, and he doesn't even download many of the messages exchanged on them. At the end of the day, Ahmad uses WhatsApp for a simple reason - the desire to stay connected to his community beyond the small settlement he lives in.

And for as little as about four euros a month, he's been able to do just that. Beyond the chain messages and forwards he sees on WhatsApp, the service has also allowed him to stay in direct contact with family. He has been able to stay in touch with his brother, who has now joined their 99-year-old mother in Bangladesh.