US considers sanctions against Myanmar over Rohingya abuses

The US is considering a range of actions against Myanmar over its treatment of Rohingya Muslims, including targeted sanctions. Earlier, the EU pledged €30 million at a UN fundraising conference to aid fleeing Rohingya. 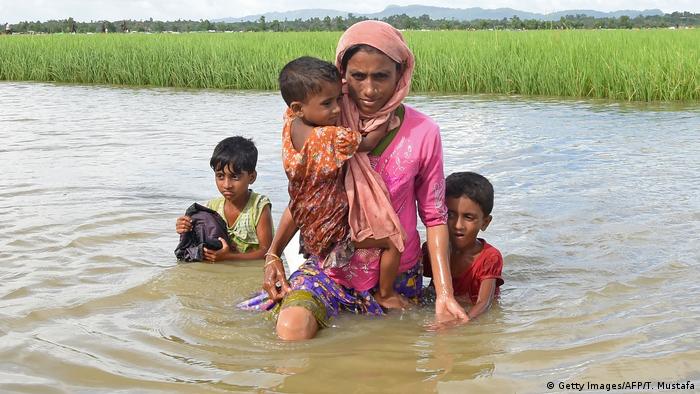 In a statement on Monday, the US State Department said it was considering a range of further actions, including targeted sanctions under its Global Magnitsky Act.

"We express our gravest concern with recent events in Rakhine state and the violent, traumatic abuses Rohingya and other communities have endured," State Department spokeswoman Heather Nauert said, announcing the punitive measures.

"It is imperative that any individuals or entities responsible for atrocities, including non-state actors and vigilantes, be held accountable," Nauert said, adding that Washington was "exploring accountability mechanisms available under US law."

Members of Myanmar's military involved in operations in northern Rakhine state will no longer be eligible for US assistance programs
and senior security force members have been uninvited for US-sponsored events.

Nauert said the US was working with international partners to urge Myanmar to allow "unhindered access" to relevant areas for the UN, international humanitarian organizations and the media.

Earlier Monday, the European Commission promised to give €30 million ($35 million) as the United Nations opened a fundraising conference in Geneva that aims to secure some of the $434 million sought by February for Rohingya refugees in Bangladesh.

"We need more money to keep pace with intensifying needs. This is not an isolated crisis, it is the latest round in a decades-long cycle of persecution, violence and displacement," Mark Lowcock, the head of the UN Office for the Coordination of Humanitarian Affairs, said during the pledging conference.

By the end of the day, a total of nearly $345 million had been pledged by governments and international donors, the UN said, calling it an "encouraging" step.

Keeping in mind past crises where the UN came up short after countries failed to deliver on their aid pledges, Lowcock stressed the importance of donors following through.

"Pledges are one thing," he told reporters. "It's really important to us that the pledges are translated as soon as possible into contributions."

More than 600,000 people from the Muslim minority group, over half of them children, have fled to neighboring Bangladesh from Myanmar's northern state of Rakhine since August amid a military crackdown on the community.

The latest influx has brought the total number of Rohingya refugees in Bangladesh to an estimated 900,000.

Shameem Ahsan, Bangladesh's UN ambassador in Geneva, told the one-day conference in Switzerland that his country was facing an "untenable situation." He said the Bangladeshi government was negotiating with Myanmar on the issue, but that Myanmar continued to insist that Rohingya were illegal immigrants from Bangladesh.

The Rohingya themselves maintain that they are indigenous to western Rakhine, with roots reaching back over a thousand years.

"Despite claims to the contrary, violence in Rakhine state has not stopped. Thousands still enter on a daily basis," Ahsan said.

The meeting was co-hosted by the European Union and Kuwait, which pledged $15 million.

The UK stepped up its pledge for the aid effort, bringing its total contribution to 47 million pounds ($62 million) while Australia pledged 10 million Australian dollars ($7.8 million).

"We are here today because, sadly, the needs are even greater than we can provide with our current resources," Elisabeth Rasmusson, the deputy chief of the World Food Program, told the conference.

"[On] behalf of the people we are trying to help, we must ask you for more."

Lowcock also urged for Myanmar to allow "full humanitarian access across Rakhine" where aid agencies have been blocked from entering.

The UN has said that Myanmar government troops and ethnic Rakhine Buddhist monks have been carrying out a campaign of killings, arson and rape since late August that is tantamount to ethnic cleansing.