German police have raided charities alleged to provide support to the Palestinian Hamas movement in the Gaza Strip. The enclave on the east Mediterranean Sea suffers from one of the world's worst humanitarian crises. 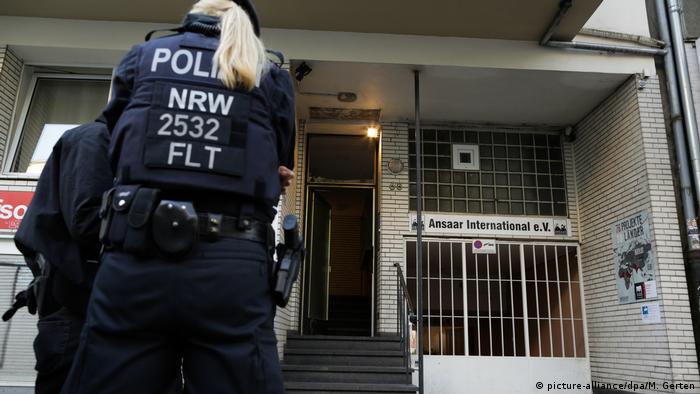 Around 90 properties in ten states were searched, with the focus of the raids targeting the charities WWR Help and Ansaar International in North Rhine-Westphalia.

"Whoever supports Hamas under the mantle of providing humanitarian aid disregards the fundamental values of our constitution," Interior Minister Horst Seehofer said. "This also discredits the commitment of the many aid organizations that have committed themselves to neutrality under difficult circumstances."

Hamas, which has armed and political wings, took control of the Gaza Strip in 2007 after it defeated the PLO-affiliated Fatah party in Palestinian elections. The US, Israel and the EU consider Hamas a terrorist organization.

Founded in 2012, the Dusseldorf-based Ansaar International describes itself as an aid organization carrying out projects "for the good of Allah." It claims to have 600 members in Germany and around 2,000 around the globe.

According the organization, it provides health services, water and sanitation, orphanages and education to the needy in Africa, Asia, Europe, the Middle East and Americas.

In Gaza, the organization says it provides emergency food aid, water, electricity and schooling. WWR Help says it provides humanitarian services in Gaza and collects donations for the Muslim holy month of Ramadan.

The raids in Germany come as the Gaza Strip suffers from a mounting humanitarian crisis marked by electricity shortages and the deterioration of critical health, water and sanitation services.

The crisis is in part caused by three wars between Hamas and Israel since 2008 and an Israeli-Egyptian blockade of Gaza. Israel blames the humanitarian crisis on Hamas' poor governance.

Israel regularly carries out airstrikes in Gaza in response to rocket and mortar fire directed at Israel.

Palestinian protesters have held weekly demonstrations for more than year along the security fence separating the Gaza Strip and Israel.

In February, the UN issued a report on the Gaza protests accusing Israel of committing "violations of international human rights and humanitarian law."

Nearly 200 Palestinian protesters have been killed and another 9,000 injured during the protests, many by live fire from Israeli military snipers.

The UN inquiry found that Israel's conduct could amount to "war crimes" or "crimes against humanity."

Israel blames Hamas for sparking the violence. It rejected the UN report as "hypocrisy and lies, out of obsessive hatred of Israel, the only democracy in the Middle East."

Hamas has been in a long-running battle in EU courts to remove its terrorist listing. In the latest ruling, a top EU court found Hamas could be labelled a terrorist organization. (06.03.2019)

A United Nations report found Israel's shooting of demonstrators could amount to crimes against humanity. The Human Rights Council adopted a resolution on Israeli accountability, but the European vote was divided. (22.03.2019)