A United Nations report found Israel's shooting of demonstrators could amount to crimes against humanity. The Human Rights Council adopted a resolution on Israeli accountability, but the European vote was divided. 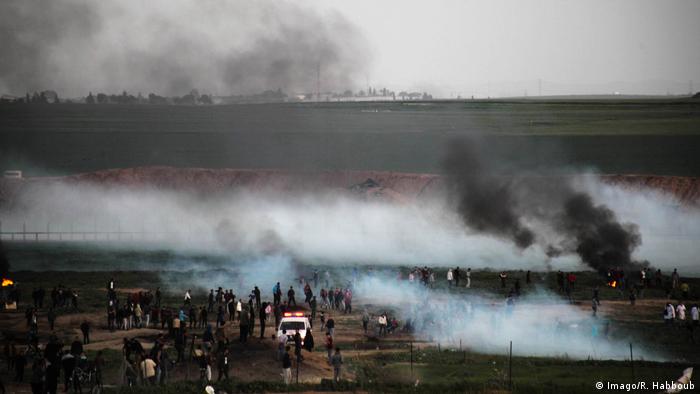 The United Nations will step up the presence of monitors in Gaza after its human rights body said Israel's shootings of Palestinians could be deemed crimes against humanity.

Five UN human rights officers will be sent to Gaza to monitor "ongoing violations" against civilian protesters after hundreds were killed in demonstrations last year.

The UN Human Rights Council passed a resolution on Friday condemning the "apparent intentional use of unlawful lethal and other excessive force by Israel" and called for the perpetrators to face justice.

The body asked for cooperation with an International Criminal Court examination into Israeli violations opened in 2015.

The resolution passed with 23 votes in favor, eight against and 15 abstentions, with European states divided.

More than 189 Palestinians have been killed and thousands more injured in the last 12 months in marches demanding Israel ease the blockade of the enclave and recognize Gazans' right to return to lands they fled during the creation of Israel in 1948.

A report released last month found only two incidences when Israeli troops were within their rights to use live ammunition when confronting protesters. The toll included 35 children, two journalists and medical workers.

It also acknowledged that Gaza's ruling party Hamas encouraged the use of incendiary projectiles.

European countries were divided on the resolution with Britain and Italy abstaining, Spain voting in favor and Austria and Hungary against. The US quit the organization last year over a perceived anti-Israel bias.

Demonstrators have turned on Hamas since last week, with multiple rallies against rising prices and dissatisfaction with the ruling party.
Rights groups said security forces cracked down on protesters and UN envoy Nickolay Mladenov condemned their "campaign of arrests and violence."

Youth unemployment in Gaza is 70 percent, mainly due to the Israeli blockade of the strip and the closed border with Egypt, according to the World Bank.

Israel says the blockade is to restrict Hamas but rights groups say it amounts to collective punishment.

Israeli airstrikes have hit an apartment building near central Gaza City. Israel says it was targeting the Islamic Jihad group, in response to an "imminent threat." The jihadists confirmed one of their top commanders was killed.