Phosphorus in our pee — the new gold? 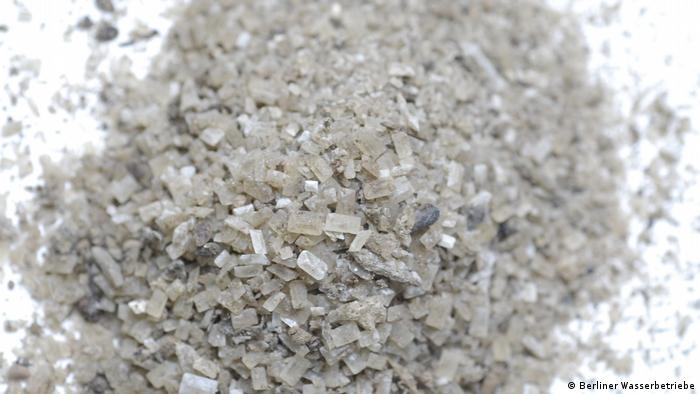 It's hard to imagine tennis fans fertilizing the pristine lawns at Wimbledon with urine, or soccer supporters slipping off at half time to donate their pee to green the grounds of Bayern Munich's home stadium. Yet such scenarios could become reality as a result of a Swiss invention called the "Urine Express."

The novel mobile treatment plant can be set up next to grass sports fields to recycle urine and collect phosphorus and other valuable minerals that would otherwise be swallowed into the sewage system.

"We want to use it as a way to make a contribution to saving resources," Bastian Etter, one of the project's founders, told DW. "We usually use 100 liters of water to flush away a single liter of urine."

Read more: Farming without pesticides: How can we make agriculture greener?

From sewage to pure water — in South Africa's townships

The mobile plant processes pee into liquid fertilizer and distilled water. Once human business has been collected in a steel tank next to the urinal, bacteria and algae are added to turn the solid excrement into sludge, while the wastewater is purified — by up to 90% — to eliminate pollutants, germs and unpleasant odors.

Magnesium oxide is then added to bind the phosphorus, leading to the formation of magnesium ammonium phosphate (MAP) — also known as struvite. Any residues from medications are filtered out with activated carbon. 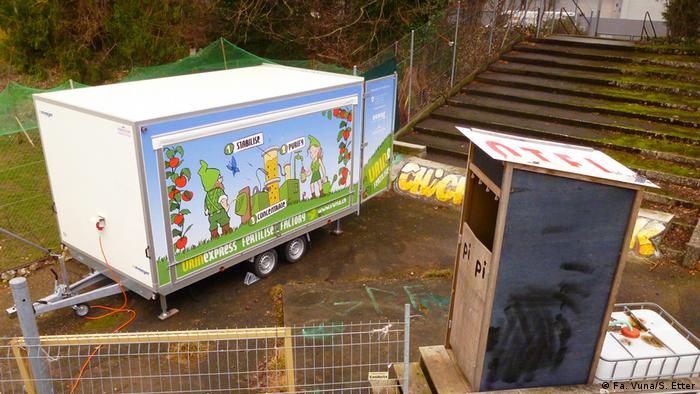 The 'Urine Express' is touring fields and sports grounds in Switzerland

Using this system, it's possible to extract 70 liters of fertilizer and 930 liters of water from 1,000 liters of urine within two to three days. That's enough to irrigate and fertilize 2,000 square meters of soil. Further purification steps could even produce drinking water.

"But that's not our approach," said Etter. "We want to use water sensibly, extract nutrients and industrially produce toilets in remote areas."

Etter and his colleagues from Vuna, the group behind the project, have tested the mobile plant in locations in Nepal and South Africa where there is no centralized sewage treatment.

Development and its consequences

It's a different story for German municipal water provider Berliner Wasserbetriebe (BWB). They handle the supply and disposal of water from millions of households that have flushing toilets and underground sewage systems. Waste is flushed away every time a toilet is used and transported to a sewage treatment plant via pipes. Once there, it is filtered and purified in a complex and water intensive process to ensure the cleanest possible effluent is discharged into water bodies.

The resulting sewage sludge, which is full of nutrients, pollutants, as well as hormones and drug residues, is dried and burned to generate energy or used in agriculture as fertilizer — as long as it meets safe limits for heavy metals. 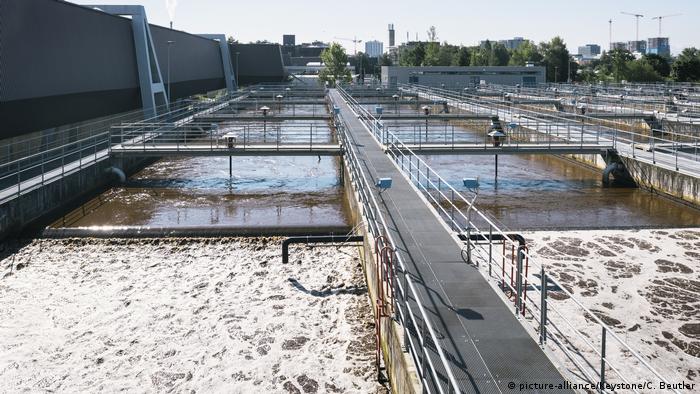 Human waste from German homes ends up in these septic tanks, where it is separated and processed

"The pipes had to be frequently milled and replaced," he told DW. So he and his colleagues began to develop a new way to remove phosphorus compounds from the water cycle.

Phosphorus in every living organism

It's no wonder so much phosphorus ends up in the water — all living things need it. Humans require about 700 milligrams a day. As a component of the organic compound ATP, it provides energy, and along with calcium helps keep bones and teeth strong. It is an essential building block of our DNA, cell walls, proteins and enzymes. It is also excreted, with other valuable nutrients, over and over again.

"It took us almost five years of research to come up with a chemical-physical process that used microorganisms to extract the bound phosphorus crystals from the water cycle," Lengemann said.

According to the engineer, their efforts had a groundbreaking side effect: "The crystalline mixture of magnesium ammonium phosphate (MAP) made for an ideal fertilizer." 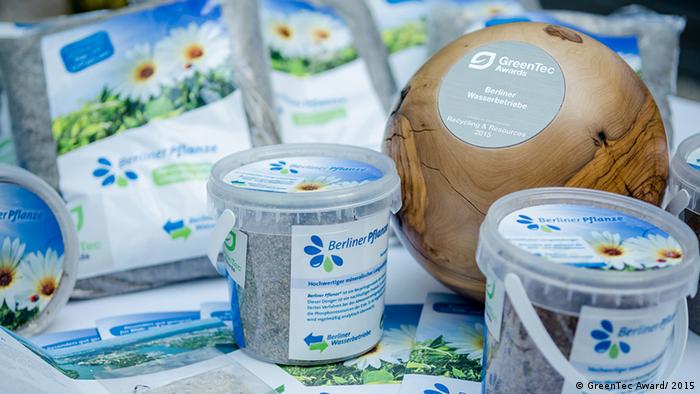 And the pressure is on. In 2017, the German government issued a new sewage sludge ordinance stating that from 2029, cities with 100,000 inhabitants or more must recover phosphorus from sewage. Cities with 50,000 or more residents have three extra years to comply.

All over the world, scientists are working to find solutions for sustainable phosphorus management.

"The time is ripe," said Bastian Etter, who is looking forward to innovative competition. 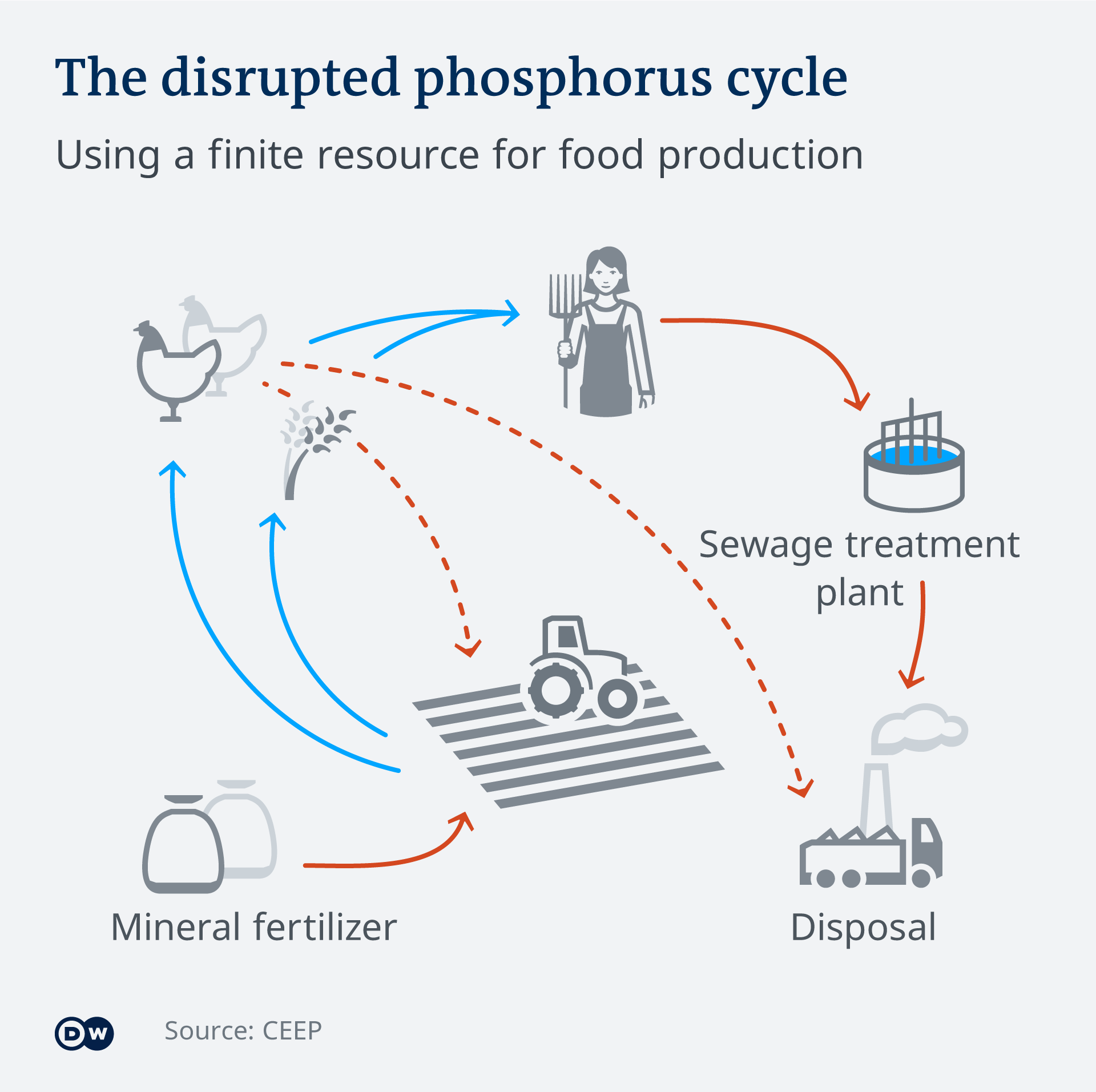 Natural phosphate deposits have been mined in several countries, including Morocco and Western Sahara territory, claimed by Morocco, China, Jordan and South Africa. Phosphorus mining often leads to environmental and health problems. Rocks rich in phosphorus often contain heavy metals such as cadmium or radioactive uranium. On top of that, some critics fear they could be depleted within a few decades.

The Moroccan based phosphate rock miner OCP relays in a DW note on the German scientists Roland W. Scholz and Friedrich-Wilhelm Wellmer. They say, there is no physical short‐term scarcity of phosphorus, despite its resource efficiency should be improved: "There are legitimate reasons for policies such as those of Germany, including: precaution as a way to ensure future generations’ long‐term supply security, promotion of technologies for closed‐loop economics and decrease in the current supply risk."

Recycling more phosphorus could therefore come with many benefits — especially in the agriculture sector, which according to the German Environment Agency, accounts for 85% of current phosphorous imports. Plants need phosphorus to stimulate root growth and the formation of leaves and flowers.

Manure over minerals in simpler times

Farmers used to spread pungent liquid manure from the stables over their fields as natural fertilizer. That was before scientist Justus von Liebig proved that the elements of nitrogen, potassium and phosphorus were essential for plant growth. His invention of the mineral "artificial fertilizer" is widely employed in industrial agriculture.

These days, huge amounts of are used in an effort to increase productivity — with fatal consequences. More and more nutrients used on farms, such as phosphates and nitrogen compounds (nitrates), are ending up in water bodies. Of the rivers that have been tested in Germany, more than half have been found to be in poor condition due to excessive concentrations of phosphorus. 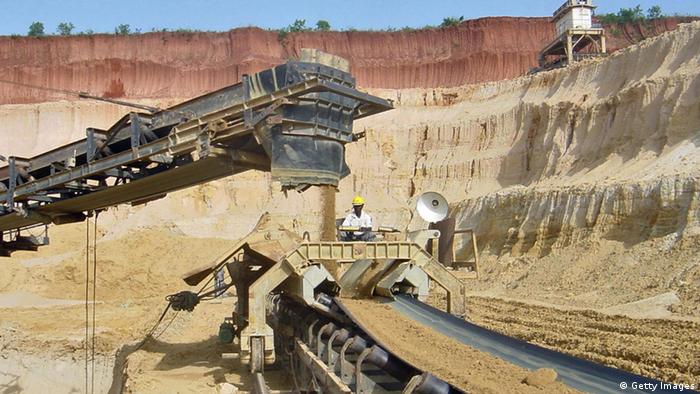 Phosphate is extracted at this mine in Togo

Striving for a circular economy

Phosphorus has perhaps the most potential as a strategic resource. The German Environment Agency (UBA) believes that recycling the mineral can reduce dependence on imports and create depots of this crucial secondary raw material. From there, phosphorus can then be reintroduced into the economic cycle.

Traditional wastewater treatment plants are still unable to isolate trace substances, but this could change in the future. Germany's Fraunhofer Institute is developing a process that would allow phosphorus to be separated from sewage sludge with the help of a high-performance ultrasound.

The TetraPhos process patented by recycling giant Remondis might also lead to a breakthrough in efficient phosphorus treatment.

"We dry and burn the sewage sludge and add phosphoric acid to the phosphorus-rich ashes," said Remondis spokesman Michael Schneider. "Using this method we isolate 90% of the phosphorus."

The company's pilot plant has already been tested in Hamburg. It has patented the idea and teamed up with water provider Hamburg Wasser to found the venture, HPhor.

Environmentalists say our species' addiction to consumption is responsible for climate change and a host of other environment ills. It's also a driving economic force. Can we reconcile the two? (03.09.2018)