Farming without pesticides: How can we make agriculture greener? | Environment | All topics from climate change to conservation | DW | 31.01.2020

Farming without pesticides: How can we make agriculture greener? 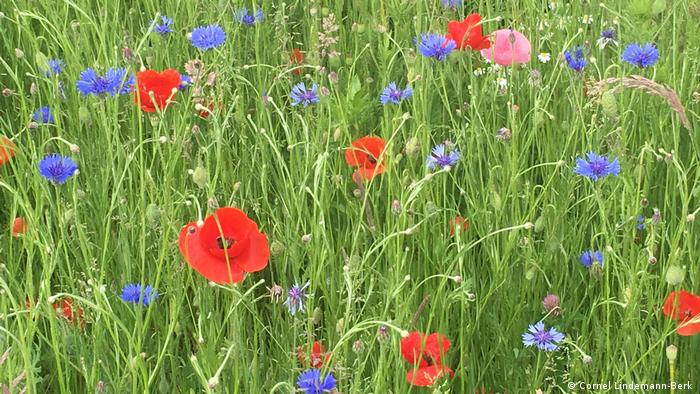 Hanging on a gate is a sign reading: "Potatoes — healthy and delicious." The slogan, to which the word "rare" could justifiably be added, is in line with Cornel Lindemann-Berk's philosophy of quality over quantity. "We don't have enough rain in the summer," he tells DW. "And since we don't want to water them, we've turned this weakness into a strength."

The yields are 50% lower than they might otherwise have been, but even the rare varieties such as Bergerac or Bamberg aren't watery. Customers from across the region come to the farm shop to buy these spuds known for their rich flavor and high mineral content.

Those who came last summer also got to witness the strips of brightly colored flowers around the edge of the Lindemann-Berk's fields. His mixes of brilliant red poppies, cornflowers and wild daisies attracted an abundance of insect life.

Scientists began recording the growth of the flowers after carrying out targeted planting for insects and birds. Here, the animals can find food and nectar, as well as a safe place to reproduce.

This is conventional organic farming

This family-run business in Germany's Rhineland region is one of 10 farms across the country taking part in a project to test and implement practical and economically viable conservation measures alongside traditional agriculture. 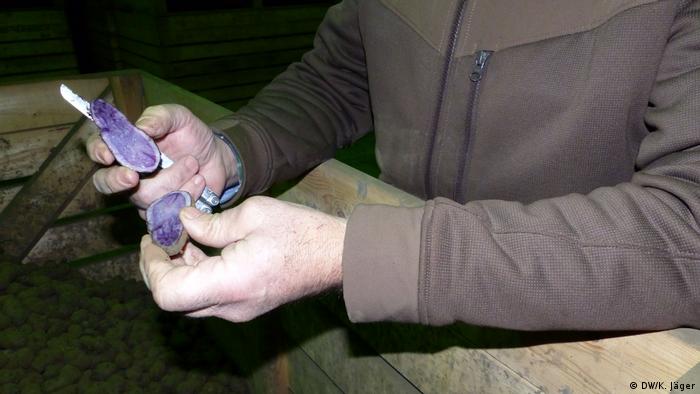 Rare and exotic-looking, but from the region: Purple or Bergerac potatoes from the farm are a popular choice 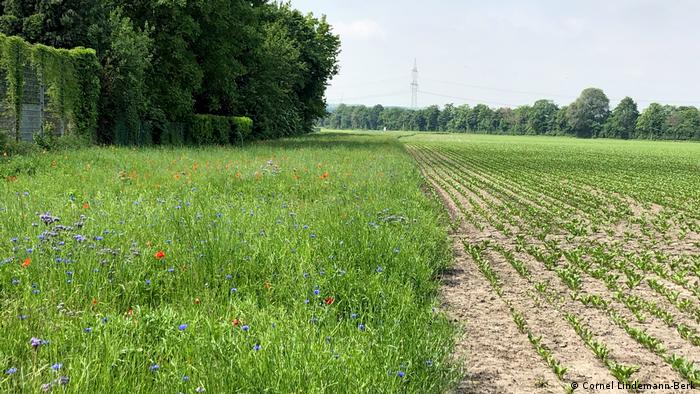 Growing and thriving: Wildflowers bloom next to the cultivated field

By taking part in the project, which is known as F.R.A.N.Z. (Future Resources, Agriculture & Nature Conservation) and runs from 2017 to 2027, Lindemann-Berk is on his way to becoming an organic farmer.

"As part of this project, we don't use liquid manure or crop protection agents," he says. "The yield is sometimes zero, because weeds such as thistles and burdock are rampant here." For every crop plant, around 30 unwanted herbs and grass also push through the ground.

Lindemann-Berk has been making losses on grain and rapeseed for years. But when he took over the Gut Neu-Hemmerich farm three decades ago he converted several disused buildings into flats and offices, and so he doesn't have to rely on agriculture alone to make a living. Nonetheless, it's still important to him to plant a diversity of grains. He doesn't cultivate monocultures but practices crop rotation, just as farmers did centuries ago. Varying what he grows each year helps to regenerate the soil, while also reducing disease and pests.

As part of other experiments for F.R.A.N.Z, Lindemann-Berk has sown corn and runner beans together. The beans grow up the corn plants and prevent light from reaching the soil, thereby significantly reducing the growth of weeds. Because the beans are rich in protein and the corn contains starch, the mix also lends itself to cattle feed.

"Skylark-windows" — rectangular strips in the shape of windows which are cut into the crops — were also introduced in the fields. This allowed the heavily decimated bird population to breed undisturbed on the ground among the dense grain.

Lindemann-Berk only uses fertilizers and pesticides in an emergency — and even then in homeopathic doses.

"Too much fertilizer can even cause unwanted weeds to multiply. We've been calculating the requirements for more than 40 years. Using soil samples, we examine the amount of nutrients in the soil and calculate exactly how much fertilizer we need to use in order to get a good yield. Only then do we buy what we need," he says.

High tech in the fields

He also prefers to use organic fertilizer made of animal excrement. "It's delivered from the Netherlands, because there's hardly any livestock nearby," he says. His farm supplies grain for the Dutch cattle. "So why shouldn't we get the animal's excrement back?" he asks wryly. "Organisms in the soil digest the valuable liquid fertilizer and excrete minerals like nitrogen, which the plants then absorb through their roots." 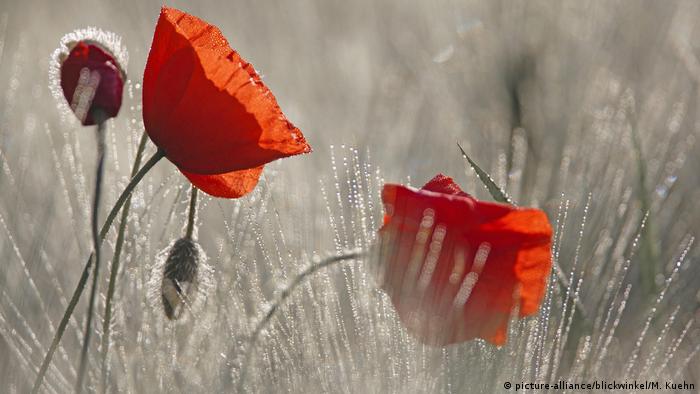 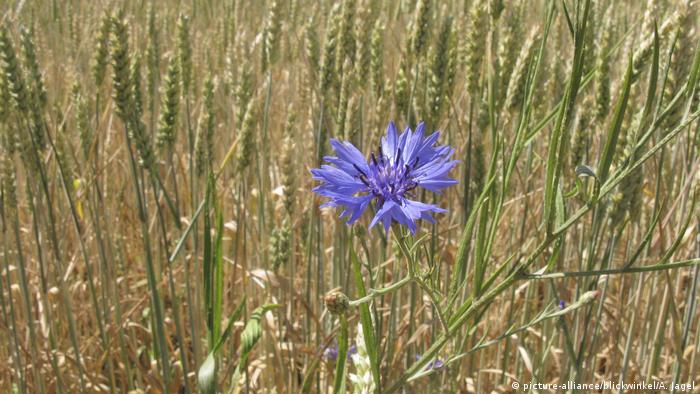 Having a mixture of plants if part of the F.R.A.N.Z project

This liquid crop protection mixture can be applied to troublesome plants using a satellite-navigated and digitally controlled syringe. This kind of work is particularly effective after sunset.

With the help of his own weather station, data collected from the soil and the meteorological service, Lindemann-Berk can make forecasts in order to calculate the risk of attack from fungus. Even then, pesticides should only be used if the plant isn't able to help itself.

By using lactic acid bacteria, Lindemann-Berk was able to dramatically reduce his use of chemical fungicides.

Once the harvest is complete, he takes soil samples again. "So far, the measurements have shown no residues of glyphosate and its breakdown products within the grain," he says.

He points to the shelf behind him, which is full of files, explaining how he has to keep his records for five years. Although fertilizer regulations have been tightening for many years now — causing many farmers to give up on agriculture — he says the positive impacts won't show up in groundwater for 30 years.

Read more: How drones are challenging the face of British agriculture

Not an organic farm — but still environmentally friendly

Organic farms can only treat their plants with copper formulations, which stimulate growth and act as deterrents against fungus. Although it's a heavy metal, people still need copper in small doses to help with blood formation and to support a functioning nervous system. 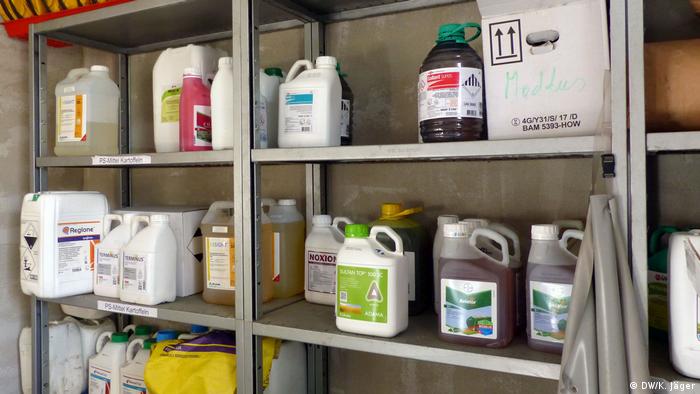 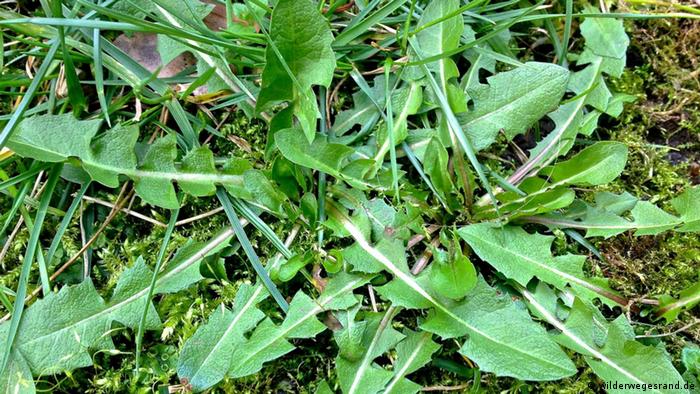 Not everyone is enthusiastic about pulling weeds by hand

"We do everything we can to be environmentally friendly, and do what the organic farms do so well," says Lindemann-Berk. "Because no one wants to harm the environment. Agribusinesses have been working in the same places for hundreds of years."

Sustainable practice is a priority here. But in order to be certified as an organic farm, he would need to pluck the weeds by hand and — as was done centuries ago — regularly rake the soil around the plants to uproot unwanted herbs and grasses.

"No one wants to do this job, not even young people doing an internship," he says. And so the job is left to machines, in the age of industrial agriculture in Germany.

Lindemann-Berk gives his plants plenty of space to grow, which allows them to absorb enough nutrients from the soil, and in turn leads to well-aerated earth that is less susceptible to fungal diseases. He also calls on customers who pay too much attention to the appearance of their fruits and vegetables to reconsider.

"If I offer my customers tasty and untreated apples from the orchards, you'll always get complaints about a few marks on the fruit," he says, adding that people want produce that is both organic and flawless. "Those two things don't go together."

Organic produce is a huge global market. But what does farming organically actually mean, and how how big an impact is it having? (03.12.2016)

Germany's farmers are having a tough time, with farm-gate prices for their produce in a radical slump. Organic produce and wine-growing are the only bright spots in an otherwise difficult agribusiness environment. (09.12.2015)